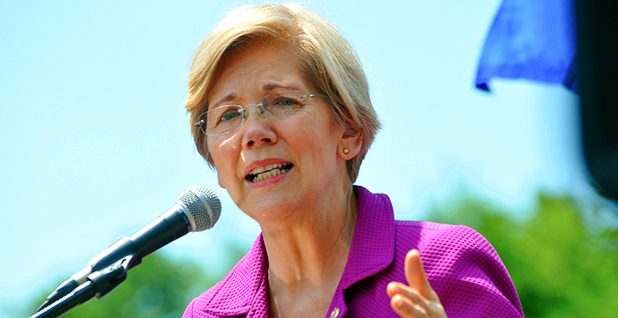 Sen. Elizabeth Warren's (D-Mass.) climate change views are being scrutinized as she considers whether to run for president in 2020. Edward Kimmel/Flickr

Elizabeth Warren has a huge following. But as the Massachusetts senator prepares for a likely presidential run, there are growing questions about what she would do to address the world’s mounting climate crisis.

The problem in the eyes of climate activists isn’t her voting record. Warren boasts a 99 percent lifetime score from the League of Conservation Voters. Instead, it’s her advocacy for environmental issues — or the absence of it. Warren, a Democrat, has focused little of the verbal firepower she reserves for Wall Street on the question of how to curb greenhouse gas emissions.

"Elizabeth Warren does not have a record of advocacy and leadership on climate change issues," said Jack Clarke, director of public policy and governmental policy at Mass Audubon, one of Massachusetts’ oldest and largest conservation groups. That assessment was echoed by several environmentalists in the state.

It also underscores one of Warren’s biggest challenges: After years of focusing on consumer protection and economic inequality in the Senate, the former Harvard Law School professor will need to expand her policy portfolio for a presidential run.

Climate isn’t the only area where Warren is looking to beef up her policy credentials. She delivered a foreign policy speech at American University last week, in a move interpreted by many political observers as an attempt to bolster her bona fides on that subject.

Climate hawks will be an important constituency in the 2020 Democratic primary, political analysts said. Recent reports from the Intergovernmental Panel on Climate Change and the National Climate Assessment have underlined the urgency of the issue, they noted.

"The green economy is the best chance we have to build the economy and benefit everyone and save our planet," said Mary Anne Marsh, a Boston-based Democratic political analyst. "That is going to be one of the top issues everyone is going to look at in a Democratic primary."

In that regard, Warren has work to do. Many activists struggled to name a climate issue on which the senator has made a name for herself, outside of a bill unveiled this fall that calls for corporations to declare climate liabilities as part of their Securities and Exchange Commission filings. While most expressed enthusiasm for her candidacy, nearly all said she needs to expand her environmental repertoire to win their vote.

"Speaking as a Democratic activist, I find her interesting and intriguing, certainly one of the top-tier candidates, but not the fiercest climate hawk in the bunch," said RL Miller, founder of Climate Hawks Vote, which works to elect candidates committed to climate action.

Warren isn’t the only Democratic contender with work to do on the climate front, Miller said. Sens. Kamala Harris of California and Cory Booker of New Jersey, two senators often mentioned among the early favorites, will also need to prove their climate bona fides, she said.

Miller listed Washington Gov. Jay Inslee and Oregon Sen. Jeff Merkley as possible candidates who have demonstrated the most commitment on climate.

Greens nevertheless expressed high hopes for Warren, arguing that her brand of economic populism is easily married with climate action. The argument that fossil fuel companies are profiting at the expense of public health and the planet is not a far leap from Warren’s focus on Wall Street excess.

Still, many said they are eager to hear from the Massachusetts senator on a variety of climate issues, saying their votes would hinge on her support for a "Green New Deal" and opposition to fossil fuel subsidies and infrastructure projects.

"I don’t know where Elizabeth Warren stands on them right now, but I have high hopes," said Stephen Kretzmann, executive director of Oil Change USA.

A Republican Senate majority has meant most of Warren’s climate advocacy has centered around blocking GOP rollbacks on climate change rather than promoting ways to slash emissions.

Warren put out a statement lambasting the Trump administration when it repealed the Clean Power Plan, former President Obama’s proposed cap on power plant emissions, and regularly skewered former EPA Administrator Scott Pruitt, quipping after his resignation that he should have been fired "28 scandals ago."

Such stances have won Warren praise from environmentalists like Deb Pasternak, interim director of the Massachusetts Sierra Club.

"Senator Warren has built an impressive record in the capitol, relentlessly fighting back against the Trump Administration’s attacks on climate action while acting on policies to move our country to 100% clean, renewable energy," she said in an email.

Craig Altemose, the executive director of the Better Future Project, a Massachusetts-based climate advocacy organization, echoed that sentiment. Warren has been supportive of local climate efforts, notably throwing her weight behind opponents of a natural gas pipeline proposed for the state.

Still, the senator has room for improvement, Altemose said.

She penned an op-ed opposing the pipelines but never appeared with the activists fighting the project. Nor has she made a commitment to reject campaign donations from fossil fuel interests, a pledge climate hawks hope to make a litmus test for Democratic presidential contenders.

"There is a missed leadership opportunity for her in not being out front on that, not only signing the pledge, but championing it and helping to undermine the political influence of fossil fuels companies so we can pass good climate policy," Altemose said.

Many Massachusetts-based observers said Warren’s relative silence on environmental issues owes itself in part to the way the state’s congressional delegation operates. The Bay State’s House delegation has long divided up committee assignments as a way to maximize its influence, ensuring that Massachusetts members rise into leadership positions. Rep. Richard Neal, a Springfield Democrat, will lead the House Ways and Means Committee in the coming Congress, while Rep. Jim McGovern of Worcester is in line to be chairman of the Rules Committee.

Practically, the approach means that Massachusetts representatives develop policy expertise in one area and defer to colleagues in others.

Ed Markey emerged from that system as the delegation’s leading voice on environmental issues during his 37 years in the House, a dynamic that appears to have carried over to some degree in the Senate, where he now serves with Warren.

"I would hope that would change with the release of the National Climate Assessment that showed the billions of dollars of cost to the economy as a result of climate change impacts," said Clarke, the Mass Audubon official.

Warren declined an interview request for this story through a spokesperson. Her office provided a list detailing her record on climate issues. She opposed Trump administration rollbacks on car emission standards and attempts to expand offshore drilling, and supported a bill calling for a national approach to extreme weather events.

Greens who have spoken to the senator say she is passionate about the issue. Warren expressed interest in bipartisan climate solutions being bandied about by the Climate Solutions Caucus, said the Nature Conservancy’s Steve Long, who briefly discussed the issue with the Massachusetts lawmaker during the organization’s national advocacy day. Her staff has also been engaged with a group that seeks to link climate change with public health, he noted.

"From conversations with her, I think she cares deeply about climate change and holding polluters accountable, protecting the public health and the environment," said Tiernan Sittenfeld, senior vice president for government affairs at the League of Conservation Voters, which contributed nearly $38,000 to her re-election campaign for the Senate.

Warren’s appearances at public events and on the campaign trail offer further glimpses of her views. When asked about a carbon tax in a debate against Republican challenger Geoff Diehl this fall, she responded, "It’s clear to me we need to make polluters pay for the damage they do" (Climatewire, Oct. 22).

A 2013 speech before the League of Conservation Voters Capital Dinner offers an even better preview of candidate Warren. In a 15-minute address, Warren railed against armies of fossil fuel lobbyists and tax breaks for oil companies, declaring at one point, "When it comes to environmental and energy policy, the system is rigged against us."

The speech came during the first year of Warren’s Senate term. She expressed support for eliminating subsidies to the fossil fuel industry, said fracking should be subject to the same clean water standards as other industries and urged full-scale commitment to addressing the climate challenge.

The remarks also suggest some inexperience with environmental issues. At one point, she urged the Senate to confirm Gina McCarthy as the next administrator of the "Environmental Protection Association."

More telling of Warren’s challenge with environmentalists, though, is the lack of a relationship with some of Massachusetts’ leading greens.

George Bachrach is among the most politically connected environmentalists in the state, having served as president of the Environmental League of Massachusetts (ELM). When Bachrach retired as ELM president last year, Markey and former Gov. and Democratic presidential nominee Michael Dukakis roasted the former state senator in a farewell celebration.

Of all the state’s politicians, Bachrach said he knows Warren the least. He conceded that may be a product of ELM’s work, which is more state than federal focused. When asked to name a climate issue where Warren has made her mark, Bachrach struggled for an answer.

"My recollection is she has been a strong voice against gas pipelines and for renewables," he said, professing that his preference would be for Warren to remain in the Senate.

Warren, like nearly all Massachusetts politicians, talks a good game when it comes to climate. The question, Bachrach said, is where it ranks on her priority list.

If Warren ultimately runs, climate hawks will be looking for an answer.