Elon Musk: ‘This is fascist … this is not freedom’ 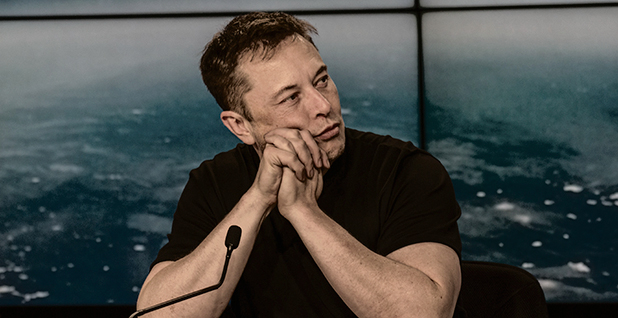 It is hard to say which was the most surprising outcome of Tesla Inc.’s earnings call yesterday: the report of a profit amid global turmoil, or CEO Elon Musk using the corporate forum to call the coronavirus lockdowns "fascist" and saying, "give people back their goddamn freedom."

Musk came into yesterday’s call with investors with reasons to keep the message upbeat. Tesla reported a profit of $16 million in the first three months of 2020, despite disruption caused by the coronavirus that rolled through the company’s operations in China and California. The results confounded financial analysts, most of whom had expected a loss. Investors cheered, driving the value of Tesla’s stock up $70 in after-hours trading.

Tesla reported on the impact of the economic downturn without mentioning the word "coronavirus," "pandemic" or "lockdown" in its 24-page presentation or in the first half-hour of a phone call with executives, including Musk.

And then Musk let his real thoughts be known.

In response to an analyst question about the coronavirus, Musk used an expletive and said, "Everything that people have worked for for their whole life is being destroyed in real time.

"I think people are going to be very angry about this, and are very angry," he continued. "This is fascist. This is not democratic. This is not freedom. Give people back their goddamn freedom."

The outburst could be seen as just the latest loose cannonball from Musk, who often makes comments that would never slip the lips of other CEOs in a public forum. He vented on Twitter earlier yesterday about the restrictions, which shut down Tesla’s flagship factory in California in late March, and were just extended to the end of May (Greenwire, April 29).

But this was the most provocative tirade he has made in the more formal context of a call with investors to discuss financial results.

Musk’s comments also made him a new, prominent voice among those — including, sometimes, President Trump — who have cast the shelter-in-place orders as violations of civil rights. But while most high-profile critics of social isolation measures have been Republicans in conservative-leaning states, Musk is a famous businessman in deep-blue California.

The electric automaker’s events capped a 48-hour roller coaster of both good and bad news for electric vehicles.

Developments outside Tesla suggested that other parts of the automotive world have differing levels of confidence in the trajectory of electric vehicles during a global recession.

On the confident side, count SK Innovation.

The Korean battery maker on Tuesday announced that it would build a second, $727 million automotive-battery factory at its site in Georgia, Reuters reported. Its first plant, a $1.7 billion behemoth, is still under construction (Electric Road Trip, Sept. 19, 2019). Its output is intended for foreign automakers based in the U.S. Southeast, like Volkswagen.

Meanwhile, America’s automakers not named Tesla appeared to ease off the electric accelerator.

General Motors said that it would delay the unveiling of the GMC Hummer, originally scheduled for May 20, because of the coronavirus, according to the news site Engadget. GM added that production is "on track" and plans for deliveries in the fall of 2021.

And Ford Motor Co. said Monday it is canceling an electric SUV it had planned to build with electric truck maker Rivian (Energywire, April 29).

Tesla profits while others sag

Tesla’s positive financial news was unexpected in part because the COVID-19 economic crash has wreaked havoc with rival automakers.

On Tuesday, for example, Ford reported that it had lost almost $2 billion last quarter and expects to lose $5 billion this quarter. And yesterday, Volkswagen reported that its after-tax losses in the first quarter totaled more than $90 million.

Tesla’s turning of a $16 million profit in this context is a sign that, as a new automaker with a blank slate, it has developed "a business model which has significantly lower costs and more production efficiency," said Wedbush Securities analyst Dan Ives in a note to investors.

The company experienced turmoil at its new factory in Shanghai, China, early in the quarter because of coronavirus lockdowns, and the final week of its quarter in California for the same reason. Other U.S. automakers began their shutdowns, of much larger factories, a few days earlier.

Despite all that, Tesla delivered its first-ever profit ever in a first quarter, which is usually its slowest.

It also posted successes with its new sport utility vehicle, the Model Y, which made its first deliveries in March. It is the first Tesla vehicle to be profitable in its debut quarter.

The sunny numbers come at a good time for Tesla, which is investing heavily in new plants. It is building a second factory in Shanghai and a first factory in Europe outside Berlin.

The announcement of the location of a fourth factory, to be built in the United States, could come as soon as next month, Musk said on the investor call.

Meanwhile, the company’s energy storage business had a down quarter, with revenues dropping from $436 million to $293 million quarter-over-quarter. Musk attributed that to a slowdown in permits and access to work sites because of shelter-in-place orders.

And Tesla said its solar roof — a ballyhooed product that has been long promised but barely delivered — reached a production level of 1,000 units a week at least once this quarter from its solar plant in Buffalo, N.Y.

The installations of the roofs have been stymied by the COVID-19 lockdown. But Musk said that by the end of the year, Tesla is targeting installing 1,000 of them a week.