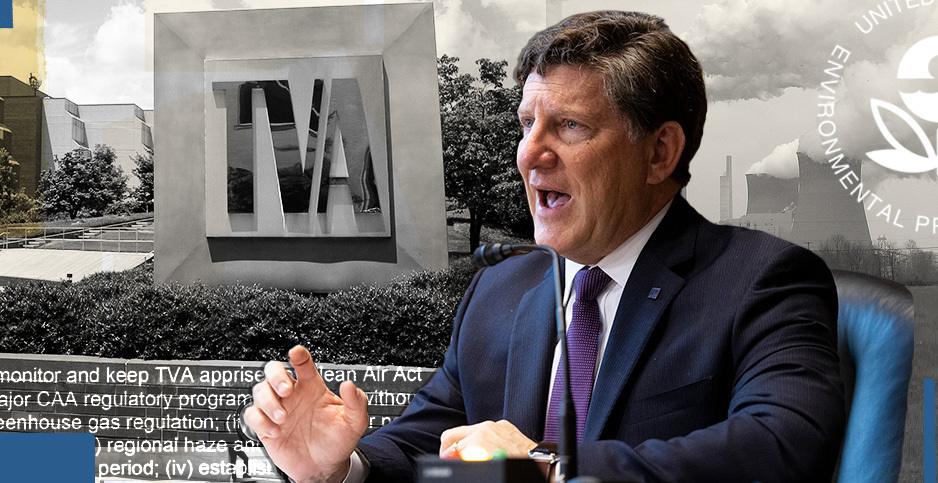 The statement from the Tennessee Valley Authority’s chief executive sounded straightforward. In “no instances,” Jeff Lyash assured members of Congress two years ago, had the federal power giant given a utility industry trade group the go-ahead to represent it in court challenges to stricter air pollution regulations.

But recently disclosed records suggest a lot of gray area on that point — ambiguity that’s now sowing questions about the sincerity of the agency’s professed commitment to more use of renewable energy sources.

Hundreds of pages of emails and other documents obtained by a watchdog organization show that a top TVA environmental manager was consistently kept in the loop about litigation brought by the now-defunct Utility Air Regulatory Group and signed off on billing statements that explicitly mentioned legal fees.

While those events are now well in the past, the disclosures have triggered a fresh call for an independent probe from critics who fear TVA might use stealth tactics in the future to fight a push for more reliance on renewables (E&E News PM, May 26). Last week, a half-dozen groups sued the agency as part of a campaign to bar spending of ratepayer dollars on industry organizations and other "third-party" entities (Energywire, Sept. 13). They also point to a more recent TVA contract with McGuireWoods LLP, a law firm that now includes attorneys once tied to the trade group, often known by its abbreviation as UARG.

“It’s a great concern,” said Daniel Tait, a spokesperson for the Energy and Policy Institute, which obtained the records through a Freedom of Information Act lawsuit. “It basically tells us they learned nothing.” Also potentially telling — now that UARG is out of business — is the Minnesota attorney general’s office move challenging a Midwestern utility’s attempt to seek reimbursement for payments to McGuireWoods.

In an email, TVA spokesperson Scott Fiedler said that only a small fraction of the legal work mentioned in the agency records would have been related to litigation, with the "vast majority" instead dedicated to providing advice to UARG members and other activities. And because TVA’s membership agreement with UARG barred the use for funds for lobbying or legal challenges, "even that small percentage would not have been provided by any TVA ratepayer," Fiedler said.

In an April 2019 letter to senior congressional Democrats probing the group’s activities, Lyash flatly declared that “TVA does not participate in UARG litigation.”

The records nonetheless show that TVA officials were regularly kept apprised of UARG’s plans, joined dinners with UARG lawyers and in one instance went on a Washington, D.C., nighttime tour of famous monuments at the group’s expense. “Also, for those of you who have not previously attended these meetings, please know that you will be well (and continuously) fed,” one attorney told representatives of TVA and other utilities in advance of a 2018 gathering.

The documents, totaling more than 500 pages in all, are mainly composed of email traffic from 2015 to 2018. Many of the messages were to or from Donald Houston, then a senior environmental manager with TVA who co-chaired a UARG committee.

For example, one September 2016 email from an attorney with Hunton Andrews Kurth LLP, the law firm that was UARG’s home base, pitched a “confidential webinar” on a new EPA interstate air pollution rule that would feature a preliminary discussion of a potential lawsuit to the rule. The suit was filed three months later with the U.S. Court of Appeals for the District of Columbia Circuit; in May 2017, Houston signaled his interest in joining a UARG call on the litigation.

Other records show that Houston was regularly updated on the status of other Clean Air Act lawsuits in which UARG had a role, including those related to haze reduction requirements and air quality compliance decisions. They also reflect that Houston — in his role as a UARG committee co-chairman — repeatedly signed off on UARG billing statements titled “Legal fees, legal expenses and technical expenses.”

“Looks fine to me based on a quick review,” he wrote to a UARG lawyer after receiving one such statement in late 2018. Earlier that year, Houston had requested and received approval to join other UARG members in a guided moonlight tour of Washington, D.C., monuments valued at $64. "Sounds like fun, actually!," a higher-up replied in noting that she had recently joined a similar outing provided by another utility trade organization.

TVA’s ties to fossil fuel suppliers were also on display. Told in late 2018 that the Trump administration was working to roll back EPA curbs on energy industry methane emissions, another employee wrote that the move would be welcomed “by the oil & gas producers TVA purchases from.”

Houston is now retired, according to TVA. Attempts to reach him for comment were unsuccessful.

‘A roster of outside counsel’

In its heyday, UARG was an unrelenting foe of Clean Air Act regulations on behalf of power providers with a stake in coal-fired generation. Over the decades, it was a named party in more than 200 lawsuits (Greenwire, May 17, 2019).

In 2017 alone, the group’s budget was $8.2 million, according to an internal briefing obtained two years ago by POLITICO.

Within a month of joining EPA, Wehrum was back at Hunton’s Washington, D.C., offices to address a UARG policy committee gathering, according to an agenda included in the TVA records. But if EPA’s air office under his watch soon set about relaxing key air pollution regulations, Wehrum’s ties to UARG drew scrutiny. In early 2019, the House Energy and Commerce Committee launched an investigation; among the UARG members asked to turn over extensive records was TVA.

In the request letter, Energy and Commerce Chair Frank Pallone (D-N.J.) and other committee Democrats noted TVA’s status as the nation’s largest government-owned power provider and questioned how spending almost $500,000 annually on a “litigation group dedicated to defeating public health and welfare regulations” meshed with the agency’s mission to improve life in the Tennessee Valley.

In his April 2019 reply, Lyash avowed that UARG had never represented TVA in court. First, Lyash said, the agency would have to provide written approval, and there had been “no instances" of its doing so (Greenwire, May 7, 2019). The agency instead used its membership in the group “to help understand, plan for and comply” with complex and highly technical Clean Air Act regulations, he wrote.

Soon after, in June 2019, Wehrum resigned without explanation. There has since been little public indication that the Energy and Commerce Committee’s probe is continuing. Spokespeople for Pallone and Rep. Diana DeGette (D-Colo.), who chairs the Energy and Commerce Subcommittee on Oversight and Investigations, did not reply to recent phone and email messages seeking an update on its status.

But even before Wehrum left the government, UARG had announced its disbanding. Early last year, three of the group’s attorneys jumped from Hunton to McGuireWoods LLP (E&E News PM, April 2, 2020). The next month, TVA signed a $150,000 contract with McGuireWoods for help in monitoring Clean Air Act regulatory developments.

The money was to be disbursed through the account previously used to pay Hunton Andrews Kurth LLP. Signing the contract for McGuireWoods was Makram Jaber, a former UARG lawyer.

While the contract initially barred the use of any TVA money for lawsuits, that prohibition was dropped this February with an amendment added to permit litigation, strategic legal advice and other services “without limitation.”

Both documents were also obtained by the Energy and Policy Institute, which describes its mission in part as countering "misinformation" from fossil fuel and utility interests, through the Freedom of Information Act. Fiedler, the TVA spokesperson, described the amendment as boilerplate to expand the scope of legal services from multiple firms and said TVA foresaw no need to use McGuireWoods for lawsuit work.

“As a smart business practice, TVA maintains a roster of outside counsel that are available as needed to augment our in-house resources,” Fiedler said.

TVA now trumpets a long-term goal of weaning itself off fossil fuels. “Aspiring to be net-zero in carbon emissions by 2050,” reads one promo on its website. But renewable energy advocates, who point to the agency’s plans for more gas-fired generation, see the contract as added grounds for skepticism about its true intent.

In asking TVA’s inspector general this May to probe whether the agency misused ratepayer money for litigation in violation of its board’s policy, four other groups cited the records obtained by the Energy and Policy Institute in saying that UARG now appears be housed at McGuireWoods under the names of the Clean Air Act Monitoring Service and the Climate Legal Group.

While the TVA board sets policies, it appears that TVA staffers “do not feel beholden” to follow those polices, said Maggie Shober, director of utility reform at the Southern Alliance for Clean Energy, which joined the request for the IG investigation. A representative of the inspector general’s office declined to comment.

More broadly, renewable energy advocates are pressing state and federal regulators to bar utilities from passing the cost of trade group expenses back to ratepayers.

In a March petition to the Federal Energy Regulatory Commission seeking such a ban, the Center for Biological Diversity labeled organizations like UARG and the Utility Solid Waste Activities Group, which has fought to relax federal coal ash disposal regulations, as bent on protecting fossil fuel interests. FERC has yet to make a decision on the petition, but in July, the Kentucky Public Service Commission denied one company’s bid to recover part of its dues to the Edison Electric Institute, another industry group, that were spent on “regulatory advocacy and public relations" (Energywire, July 6).

Another former UARG member in Minnesota is similarly facing opposition from the state’s attorney general in its effort to charge ratepayers for the expense of its own contract with McGuireWoods.

The attorney general’s office represents customers in Otter Tail Power Co.’s bid for a rate hike before the Minnesota Public Utilities Commission. In recent testimony to the commission, Shoua Lee of the attorney general’s office argued that the company should not be allowed to pass on about $23,000 in costs for McGuireWoods’ services provided under the umbrella of the Clean Air Act Monitoring Service and the Climate Legal Group.

While Otter Tail claimed the services were needed to keep up with "complex regulatory developments" and did not involve legal representation, its filing did not address the fact that the people providing those services "are currently still engaged in environmental and air-quality litigation," Lee wrote.

In response to emailed questions from E&E News, Jaber reiterated that both services "are focused exclusively on keeping the clients abreast of legal and regulatory developments." The Climate Legal Group was founded more than a year before UARG dissolved and has a different membership, goals and priorities, he said, while the Clean Air Act Monitoring Service is a label used by Otter Tail, not an actual entity.

Any suggestion that UARG is now recreating itself at McGuireWoods, Jaber said, "is baseless and factually wrong."