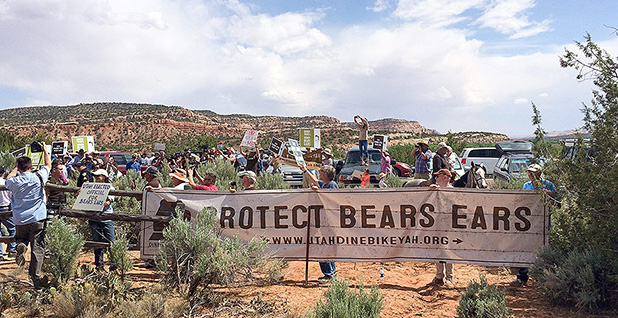 Newly disclosed internal emails show senior Interior Department aides contemplated whether they could delay the release of a Fish and Wildlife Service study on "Americans’ relationship to nature" in 2017 over concerns the report could undermine President Trump’s order to review the boundaries of dozens of national monuments.

In the emails, Bloomgren questioned whether the scheduled release of the FWS study, titled "The Nature of Americans National Report: Disconnection and Recommendations for Reconnection," could cast a negative light on the monument review.

"I wonder if this could be fodder for those opposed to the [executive order] to question the review. Defer to you all but something to think about," wrote Bloomgren, who left the Trump administration in 2017 for a post at the American Petroleum Institute.

She added, "If I recall, FWS had a number of partners on this report so the timing may be difficult to change."

The report, based on a study of 12,000 adults and 8- to 12-year-old children, was sponsored by FWS along with the Fish & Wildlife Foundation of Florida, the Florida Fish and Wildlife Conservation Commission, the Texas Parks & Wildlife Department, the Disney Conservation Fund, the Morrison Family Foundation, the Wildlife Management Institute and Yale University.

The email exchange showed Bloomgren was made aware of the study and its release date when an FWS aide contacted Interior’s press office seeking approval for a quote from Zinke.

"Tomorrow, FWS along with several partners will release a study analyzing American engagement in and attitudes towards the outdoors, outdoor recreation and nature. The study of 10,000 families shows that the vast majority of Americans rely on the outdoors for their physical health and emotional wellbeing, and as a key component of their children’s education," Senior Public Affairs Specialist Paul Ross wrote in an email to then-Interior Communications Director Laura Keehner Rigas.

Ross also proposed a quote attributed to Zinke that is redacted in the emails. At the time of its publication, press releases on the study included quotes from then-acting FWS Director Jim Kurth but not Zinke.

But then-Interior press secretary Heather Swift, now a senior adviser at Interior, warned Rigas and Bloomgren that Zinke could not delay the report.

"We have no control over timing whatsoever," Swift wrote. She also dismissed suggestions that the FWS report would affect the monument review.

"The very nature of the department is at odds with itself (as far as special interests are concerned) so we are going to always have that issue to deal with. Mitigate it where possible, but I don’t think that this report damages/is damaged by the EO in anyway," she wrote.

Swift continued: "My takeaway from the report is that average people like to go outside, even if it’s to the postage stamp park on the corner of a city block. However, excessively large and restrictive monument designations don’t benefit the common family. They close off access for everyday people to enjoy the outdoors. Unless you’re a skilled hiker who can do an all day pack, you’re not really going to see [Bears Ears] because you can’t drive there."

Trump, who vowed to end what he called the "abusive practice" of establishing national monuments under the Antiquities Act of 1906, eventually signed a proclamation slashing the site to 202,000 acres, or about 15% of its original size.

But Native American tribes and conservation advocates have challenged Trump’s actions in federal court, arguing the president does not have the authority to reduce monuments established by his predecessors.

Lawsuits are also pending against reductions that Trump made to Utah’s Grand Staircase-Esclante National Monument.