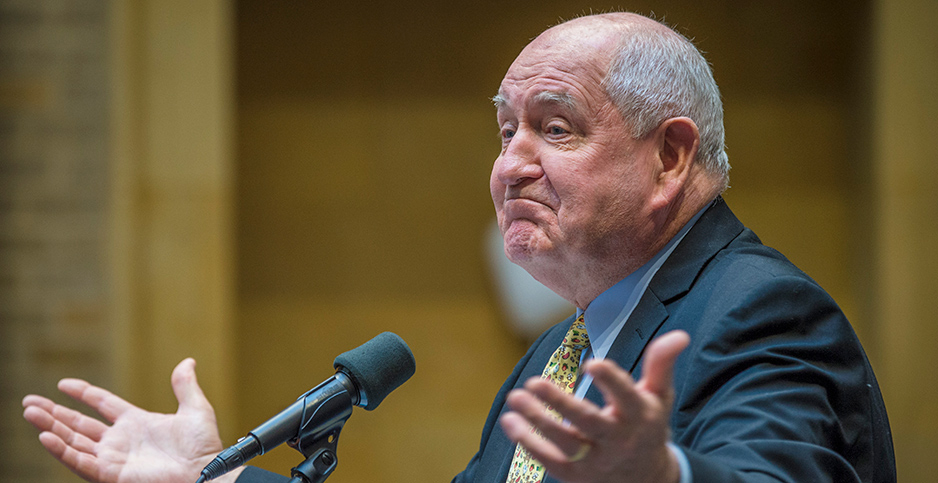 Longtime donors to Agriculture Secretary Sonny Perdue, shown here in a file photo, coordinated with the Agriculture Department and EPA on biomass, according to emails. U.S. Department of Agriculture/Flickr

Earl and Wanda Barrs, who own and operate a tree farm, organized a meet-and-greet last July for Perdue and EPA Administrator Scott Pruitt, according to emails released to the Sierra Club. The meeting served as a prelude to a policy change by Pruitt’s EPA last month that could pay off for the Barrs.

"Arrangements for the Administrator’s trip are coming along nicely. We look forward to providing him and the Secretary an informative and educational trip as well as introducing him to some really great folks," Earl Barrs wrote in a June 28 email to EPA and the Department of Agriculture. "Wanda and I know a thing or two about providing ‘Good ole Southern Hospitality’ for our guests at Gully Branch."

The Barrs have racked up awards and recognition for conservation and ensuring best practices for tree farming. An EPA official said they introduced themselves to Pruitt at a forestry industry meeting last spring and invited the administrator to their farm, in part to show how they teach students about management practices.

The couple also has a history with Perdue. Then-Georgia Gov. Perdue in 2003 recommended Wanda Barrs as chairwoman of the Georgia State Board of Education. And Earl Barrs donated $5,000 to Perdue’s successful 2006 re-election campaign.

In 2010, with Perdue still in the governor’s mansion, the Barrs became the first foresters ever to receive the Governor’s Environmental Stewardship Award for Agriculture. Earl Barrs is also a past president of the Georgia Forestry Association.

Pruitt returned to Georgia last month to announce EPA’s determination that converting trees and other biomass into fuel is carbon neutral, a finding that many say doesn’t wholly reflect a polarizing field of scientific inquiry (E&E News PM, April 23).

While the Barrs aren’t Pruitt’s political patrons, the meeting and subsequent policy announcement raise concerns, said Tyson Slocum, energy program director with watchdog group Public Citizen. To Slocum, it was another example of Pruitt deciding a policy that benefits industry — Georgia harvests the most trees by volume in the country, according to the National Alliance of Forest Owners — at the expense of public health and the environment.

"It’s been rumored that Administrator Pruitt is interested in potentially grander electoral offices. The question is whether this is part of lining up potentially important donors for such activities," Slocum said, referencing Pruitt’s rumored ambitions to run for the Senate or governor in Oklahoma. "This is fairly unprecedented that the sheer number of questionable activities and meetings that Administrator Pruitt has engaged in."

Earl Barrs and his son Andy run Barrs Industries, which owns 185,000 acres of commercial timberland in Texas and Louisiana. Other investments include conservation of wetlands, a 100-million-ton coal reserve in Central Appalachia and a pharmaceutical services company.

"This region was targeted for the exceptionally high growth rate it historically demonstrated with southern yellow pine," the company’s website says. "In addition to the fertility of this region, multiple well-established sawmills and other wood production facilities secured the future liquidity of this fast growing timber resource."

The Barrs and USDA did not respond to requests for comment, but EPA issued a statement: "Earl and Wanda Barrs have worked tirelessly for decades to educate students on the importance of forestry and the environment. The visit to Gully Branch Tree Farm reaffirmed that there are no better stewards of the land than folks like The Barrs."

Earl Barrs also runs Due South Investments LLC, and both he and Wanda Barrs used email addresses with that domain. What exactly it invests in is opaque — its website has a homepage, but that’s it. Given it’s a limited liability company, or LLC, there are few ways to glean information about the business.

Pruitt portrayed the carbon-neutral policy as a boon to rural communities.

"Today’s announcement grants America’s foresters much-needed certainty and clarity with respect to the carbon neutrality of forest biomass," he said in a statement at the time. "Managed forests improve air and water quality, while creating valuable jobs and thousands of products that improve our daily lives. This is environmental stewardship in action."

EPA didn’t inform the press of Pruitt’s visit to Georgia, where he and Wanda Barrs read a book by forester and Allman Brothers and Rolling Stones keyboardist Chuck Leavell to elementary school students. But in a statement from the National Alliance of Forest Owners, Earl Barrs indicated the policy change would help his and other businesses.

"In Georgia, we excel in growing trees," he said. "Keeping forests healthy and productive in this great state is a proven strength of our land and our forestry professionals. Our challenge is that there are not enough healthy markets for the wood we grow."

Whether burning trees for energy actually has no effect on the climate is debatable. EPA’s Science Advisory Board has been at a stalemate over the issue since 2011.

Environmental groups, for their part, argue biomass isn’t renewable energy and say facilities that burn it can produce as much carbon dioxide as coal-fired power plants. When trees are harvested for energy also matters — old-growth forests take decades to replenish and sequester carbon again, for example (Climatewire, April 24).

But there’s also a benefit to wood-to-fuel, biomass supporters say. Many use low-value stock that would otherwise sit on the forest floor, potentially sparking wildfires that belch carbon dioxide as well as hazardous air pollutants into the atmosphere.

The event at the Barrs’ residence was just one of several times Pruitt met with timber interests. InsideClimate News reported two Pruitt colleagues from his time in Oklahoma — including his former chief of staff — lobbied EPA for the timber industry. Neither had ever lobbied at the federal level before 2017, according to lobbying disclosure forms.

Whether Pruitt or Perdue hinted at the July 2017 event that a forthcoming carbon neutrality policy was inevitable isn’t clear. Regulations, however, were a main theme, based on emails between Leavell, who attended, and Pruitt’s scheduler, Millan Hupp.

Leavell, who could not be reached for comment, is a tree farmer who now runs the Charlane Plantation in Dry Branch, Ga., with his family. He’s a friend of the Barrs and presented them with the Georgia environmental stewardship award in 2010. Leavell also has been an outspoken voice on climate change and has played music at White House Correspondents’ Dinner parties through his environmental news website, Mother Nature Network.

"We appreciated Administrator Pruitt taking the time to come down and share his thoughts with us Tree Farmers. While I do support some of the rollbacks of regulations that were discussed, I certainly hope he will be mindful of making sure we all have clean air, water and a healthy environment during his tenure and that some of the important regulations that assure that will remain in place," Leavell said in a July 17, 2017, email.

"Given the present state of affairs in Washington, it would, in my opinion, be helpful for any of our leaders to start trying to reach out to ‘the other side’ and as both Sec Perdue and Admin. Pruitt mentioned at our meeting, to be ‘good listeners.’ I hope and trust that will be the case!"