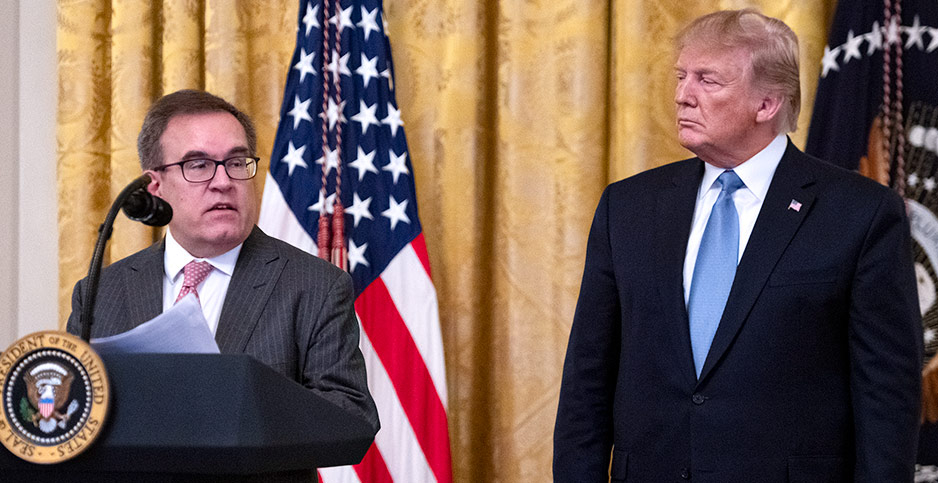 Internal EPA emails show that Administrator Andrew Wheeler was personally involved in efforts to discredit last year’s National Climate Assessment, a sweeping report by staff at EPA and other agencies that punctuated the ominous impacts of rising temperatures.

The 2018 report, released the day after Thanksgiving, sent a message that was sharply at odds with the Trump administration’s message on climate change, or its work to weaken regulations in areas such as power plants and cars. Rather than justify those moves, the government-issued climate assessment was widely seen as contradicting them.

Wheeler, as the acting administrator, chose a line of attack almost immediately. By focusing on a technical aspect of the report, he was able to sidestep the broader conclusions by experts that human-caused climate change threatens to disrupt ecosystems and the economy.

In interviews and public appearances, he blamed its alarming conclusions on climate modeling scenarios used by researchers — assumptions he argued were mandated by the Obama administration to make a political point. Wheeler particularly targeted what he calls the "extreme" scenario — also known as the Representative Concentration Pathway, or RCP, 8.5. That input — which assumes high emissions and low economic growth associated with more climate-related damage — made the report’s findings look artificially bleak and led to breathless media coverage, Wheeler claimed.

Some climate scientists say the scenario that Wheeler describes as "extreme" might not be pessimistic enough. RCP 8.5 assumes the world will reduce its fossil fuel use by about 20% over the next 80 years. But ballooning energy demand in developing nations and the political climate in key countries like the United States and Brazil could conceivably put that assumption out of reach.

Wheeler’s decision to focus on climate models might seem surprising. But emails obtained by E&E News through a Freedom of Information Act request show that Wheeler was armed with talking points by career staff after the report’s release.

For example, Wheeler suggested at a Washington Post event five days after the report’s release that the Trump administration should "take a look" at climate modeling before work begins on the report’s next edition, due in 2022. Emails show that then-air office appointee Mandy Gunasekara asked EPA staff to "beef up" his usual climate talking points ahead of the appearance.

"I think it was asking to put the report in context," Gunasekara told E&E News this week.

Wheeler questioned the report’s accuracy, telling the audience: "I wouldn’t be surprised if the Obama administration told the report’s authors to take a look at the worst-case scenario for this report."

That sparked a slew of stories that quoted former Obama officials like White House science adviser John Holdren, who dismissed Wheeler’s allegations. The day after the Post event, conservative news outlet The Daily Caller reported on a 2015 memo from Holdren to the subcommittee responsible for the National Climate Assessment, in which Holdren suggested they "focus on RCP 8.5 as a high-end scenario and RCP 4.5 as a low-end scenario."

The RCP 4.5 scenario is a moderate scenario associated with predictions of milder climate-related damages.

It appears that Wheeler himself forwarded that story to four of his top political appointees the same day with the comment: "I was right." The FOIA release redacts the email address, citing "personal privacy."

Later on Nov. 28, John Konkus, a top political aide in EPA’s press office, sent an email referencing The Daily Caller‘s story to Chief of Staff Ryan Jackson, Gunasekara and others.

"Ryan: On his way out the door, Andrew asked me to put something like this together and blast it out ASAP while the story is hot," Konkus states in an email marked "high importance."

Wheeler still claims that the climate models are politically contrived, especially when reporters cite the dangers of climate change.

He surprised the Group of Seven in May by raising the topic of RCP 8.5 at the group’s environment ministerial, where climate modeling was not on the agenda (Climatewire, June 10). The talking point about uncertainty in modeling has become a standard line for Wheeler.

Wheeler has claimed that the Intergovernmental Panel on Climate Change, the United Nations’ climate science body, is abandoning the RCP 8.5 scenario out of concern that it leads to inaccurate findings. That’s not true. The IPCC included the scenario in its special report last year. Climate researchers in general continue to use the scenario together with three less pessimistic modeling scenarios to show a range of possible outcomes in emissions, warming and the world’s ability to adapt.

What’s less clear is whether EPA is trying to implement Wheeler’s comments about the scenario into agency doctrine.

Gunasekara and Wehrum attended weekly meetings with career staff of the Office of Air and Radiation in the spring and summer of 2018. Emails from those meetings show that climate modeling was on the agenda. Briefing papers haven’t been made public. It’s not clear whether Wheeler was briefed on climate modeling prior to the report’s release, but Gunasekara said he would be familiar with the issues.

"I think that it goes back to his work at the Senate [Environment and Public Works Committee]," said Gunasekara, who also worked for the committee. "That was always a big part of the discussion."

Wheeler did receive a half-hour climate modeling session on Dec. 6, 2018, after the report’s release and his initial media interviews in which he blasted the modeling. Then-Office of Atmospheric Programs chief Sarah Dunham, Gunasekara, Wehrum and Deputy General Counsel Justin Schwab were expected to attend.

Two days earlier, Gunasekara said in an email to EPA staffers Natasha Eby and Hayley Humphreys that the purpose of the meeting is to "follow up my climate science discussions with AW and get a more in-depth briefing with our technical team on the books."

The administration has not said whether it is reviewing the climate models that will be used in the next edition of the National Climate Assessment.