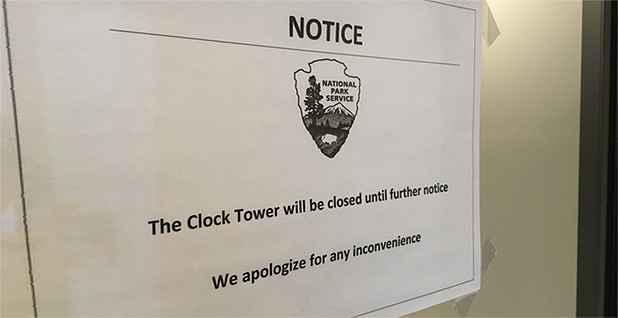 Frustrations mounted in the General Services Administration earlier this year as the agency struggled to explain why it reopened a National Park Service unit inside the Trump International Hotel Washington, D.C., during the partial government shutdown, with some officials worrying the agency’s slow response could make the decision "look suspicious," according to newly disclosed documents.

Email exchanges between GSA officials were revealed in response to a lawsuit filed under the Freedom of Information Act by American Oversight. The watchdog shared those documents with E&E News.

The conversations reveal new details about the Trump administration’s efforts to defend its decision to reopen the park service site inside the president’s namesake hotel on Pennsylvania Avenue even as other public sites remained closed in what would become a 35-day shutdown (Greenwire, Jan. 2).

"The fact that we aren’t able to answer these inquiries is making us look suspicious when there’s nothing to see except perhaps some bureaucratic incompetence," GSA Chief of Staff Robert Borden wrote in an email Jan. 3, a day after E&E News first reported on the decision to reopen the 270-foot observation tower to the public.

"I just deleted several paragraphs venting about this that I intended to send to Gelber, Darren and others but decided against sending. Gelber provided a timeline in writing, which helped and seems to be firm but it is missing too much detail for us to be able to [confidently] answer media and congressional inquiries," Borden wrote.

The Trump Organization operates the GSA-owned building under a 60-year lease that began in 2013. That contract stipulates the company maintain public access to the observation tower, where the park service provides interpretive programming, including self-guided tours and an exhibit area.

Previously disclosed park service documents show GSA inked a deal to spend nearly $600,000 to continue operations at the Old Post Office Tower for up to a year in the event of a prolonged government shutdown — triggered when Trump’s demands for billions of dollars to fund a border wall upended appropriations legislation in December last year.

The newly released records from the American Oversight lawsuit include an interagency agreement between GSA and the park service to keep open the site inside the Trump hotel. E&E News previously reported on that deal, which was also released under FOIA by the service (Greenwire, March 21).

GSA was informed that the shutdown would send park service rangers home from the bell tower.

"As per our phone conversation this morning, in the event of a lapse of funding at midnight tonight, no NPS personnel will be working at the Old Post Office Tower for the duration of the shutdown," an NPS official said in a Dec. 21, 2018, email.

"We will ensure that computers and lights are turned off and office doors are secured tomorrow morning, but then no NPS personnel will return until the government reopens," the email said.

But the decision to reopen the facility — as trash accumulated on the National Mall and other park units across the United States remained closed — drew attention for both GSA and the service.

The GSA emails also show the agency’s response to questions about whether the president himself or his family business requested to keep the NPS site open during the shutdown.

"The recent closing and reopening of the observation tower at GSA’s Old Post Office facility was unrelated to the facility’s tenant," according to a statement that Jeff Post, associate administrator for GSA’s Office of Congressional and Intergovernmental Affairs, shared with a House aide in a Jan. 7 email.

A spokesman for Trump Hotels did not respond to repeated inquiries about the Old Post Office Tower site for this story or previous stories.

But GSA spokeswoman Pamela Pennington reiterated to E&E News today the agency didn’t discuss the site’s operations with Trump or his company.

"As GSA has publicly stated in the past," she said, "we did not have any communication with the tenant or any affiliated entity about the reopening or the funding of the Old Post Office clock tower."