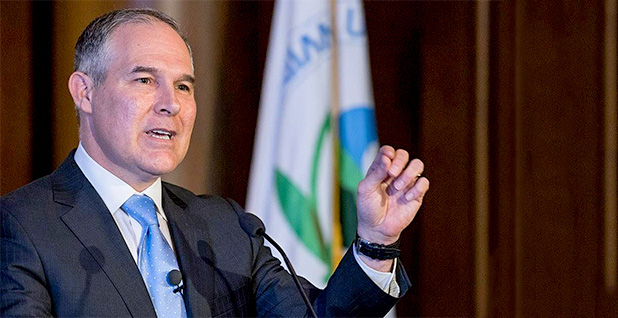 Emails released today from U.S. EPA Administrator Scott Pruitt’s time as Oklahoma attorney general show he and his office had a familiar if not symbiotic relationship with fossil fuel companies.

Under a court order, the Oklahoma attorney general’s office began turning over 7,564 pages of emails and other records last night to the Center for Media and Democracy (CMD). The liberal-leaning watchdog group had sued Pruitt for failing to respond to its open records requests, including one ignored for more than two years.

The Senate confirmed Pruitt as EPA chief in a contentious 52-46 vote Friday. He addressed agency staffers for the first time as EPA chief yesterday.

Senate Democrats pushed to extend debate on his nomination until the emails were released, to no avail. CMD filed its open records lawsuit in part so senators could have reviewed the records before voting on Pruitt’s nomination to lead EPA.

"There are hundreds of emails between the AG’s office, Devon Energy Corp., and other polluters that senators should have been permitted to review prior to their vote to assess Pruitt’s ties to the fossil fuel industry," Arn Pearson, CMD’s general counsel, said in a statement.

Yesterday, a spokesman for the Oklahoma attorney general’s office said it went "above and beyond" what is required under the law, providing thousands of additional documents in response to the litigation.

"This broad disclosure should provide affirmation that, despite politically motivated allegations, the Office of Attorney General remains fully committed to the letter and spirit of the Open Records Act," said Lincoln Ferguson, the Oklahoma attorney general spokesman.

Pruitt’s record as a vocal EPA critic that sued the agency over several of its regulations has long been under scrutiny, including in a December 2014 New York Times story that used several documents from Pruitt’s office. Many of the same companies that were shown to have been in touch with Pruitt as Oklahoma attorney general will now be regulated by EPA with Pruitt as the agency’s chief.

At his confirmation hearing last month, Pruitt said he was representing his constituents when his office took action against EPA at the urging of fossil fuel companies.

"The efforts that I took as attorney general were representing the interests of the state of Oklahoma," Pruitt said.

Emails released today show Pruitt and his staff at the attorney general’s office were in close contact with energy interests.

In 2013, Pruitt’s office worked with Devon Energy, an Oklahoma-based oil and gas producer, to rally other attorneys general against the Bureau of Land Management’s proposed rules on hydraulic fracturing.

Devon executives reviewed a draft of an unsigned letter from the Oklahoma attorney general’s office, which was intended for other states’ lawyers to sign. The letter included similar arguments to Devon’s written comments and included some passages that were identical.

"I think that this letter will make a strong statement and a real difference," wrote Brent Rockwood, Devon public policy director, in an email to Deputy Solicitor General Clayton Eubanks. "Do you think that we will get any Democrats to sign the letter? Also, when you finalize the document and send it out, can I please get a copy for my records?"

In September 2013, mining industry lawyer Peter Glaser reached out to the Oklahoma deputy solicitor general about the state’s lawsuit against regional haze requirements. At the time, Glaser was representing Arizona in a challenge to EPA’s authority to impose federal implementation plans to reduce regional haze pollution.

Two months earlier, in a blow to Pruitt, the 10th U.S. Circuit Court of Appeals ruled that EPA acted reasonably when it disapproved a state haze plan on the grounds that it did not do enough to cut sulfur dioxide emissions. That dispute started in March 2011, two months into Pruitt’s tenure as Oklahoma’s attorney general (Greenwire, Feb. 14).

Glaser suggested a brief he had filed on Arizona’s behalf "could be a fruitful argument to make" in Oklahoma’s effort to appeal the ruling.

Eubanks commended the brief, saying he had received a copy "from someone recently."

"Very well written, we definitely used it to try and focus our arguments on the standard of review issue in our Petition for Rehearing En Banc," Eubanks wrote.

He added, "Amicus support is welcomed and we appreciate the support, especially given the broad impact the panels incorrect decision will have nationwide."

The litigation sputtered to an end in 2014 when the U.S. Supreme Court declined to take Pruitt’s appeal.

The Oklahoma attorney general filed an amicus brief with the high court opposing the proposal in March 2013.

But over the summer months of 2013, his office continued to coordinate with AFPM. The group’s lobbyists frequently offered legal strategy to the Oklahoma attorney general’s office.

In a July 12, 2013, email, AFPM general counsel Richard Moskowitz informed Eubanks that his group and the American Petroleum Institute planned to file a waiver later that month.

"We think it would be most effective for Oklahoma to file a separate waiver petition that emphasizes ‘severe environmental harm,’ as this argument is more credible coming from a State with primary responsibility for achieving and maintaining attainment with the NAAQS [National Ambient Air Quality Standards]," Moskowitz said.

"Hey lady," she wrote, before continuing, "I have some language for you on the RFS waiver letter, but was hoping we could chat before I sent it to you so I can give you a little context."

In November 2013, EPA announced it was lowering the RFS standard for the first time in its history.

Pruitt’s office put out a press release praising the decision.

"The evidence is clear that the current ethanol fuel mandate is unworkable," Pruitt said. "The decision by the EPA to lower that standard is good news for Oklahoma consumers."

In July 2013, Aaron Cooper moved from the office of Oklahoma Gov. Mary Fallin (R) to the attorney general’s office. He told colleagues that in addition to press-related duties, he would work on "public affairs outreach and strategic communications strategy."

Soon after joining, Cooper reached out to Matt Ball of Americans for Prosperity to "talk about how the AG’s office and AFP can work together." And in August, he inquired with Ball about a speaking slot at AFP’s national convention.

Cooper worked closely with Ball. The two traded articles to post on social media and made plans to meet for coffee. In planning for the national meeting, Cooper and Ball worked out what Pruitt would discuss in a panel discussion with Sen. James Lankford (R-Okla.).

Ball said he would look to Pruitt to focus on the "heavy hand of federal govt infringing on states rights by mandating how much Oklahomans pay for electricity."

Ball added that an official from the Competitive Enterprise Institute would talk about costs of federal regional haze regulations, so Pruitt could highlight his opposition to EPA’s "sue-and-settle" practices with environmental groups.

"That way you guys don’t have to deliver those messages and can focus on what the AG does best, opposing the Obama administration and its nasty tactics on the environment," Ball said.

In a follow-up email about the event in August, Ball said "this is an excellent opportunity for the AG to discuss the role of attorneys general as a last line of defense for states rights against overly intrusive federal regulation of which EPA environmental is only one example."

Cooper also worked with the Oklahoma Council of Public Affairs, which bills itself as a local version of the Heritage Foundation.

In August 2013, Cooper asked staff there for "some contacts at Heritage to whom I can send updates like this?" Attached was a press release about Pruitt’s efforts to fight President Obama’s national health care law.

Today’s email release may be the first of many for Pruitt. Because of CMD’s lawsuit, more records should be forthcoming from his time as Oklahoma attorney general.

On Feb. 27, the attorney general’s office has been ordered to deliver records in response to five open records requests by CMD, according to the group. Further, CMD will ask the court to review records that have been redacted while the judge is also reviewing an unknown number of documents that could be released as well.

Click here, here, here and here to read the emails released to CMD.