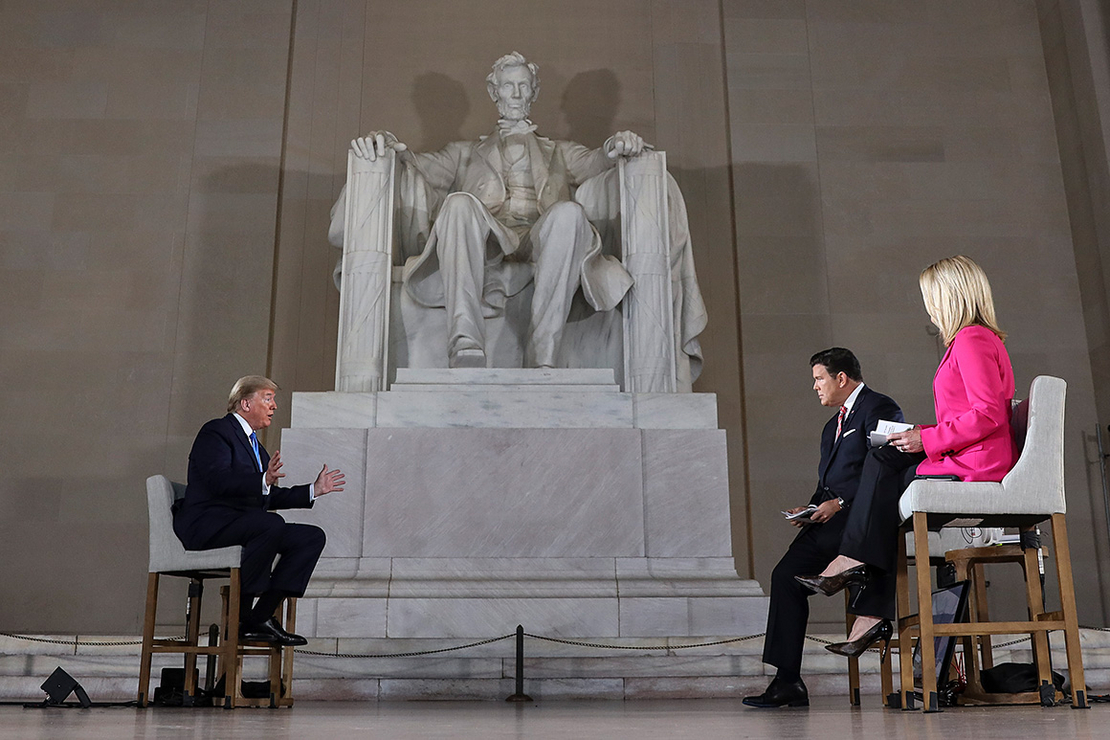 On a Tuesday morning in late April 2020, a Park Police official emailed his colleagues about some “unofficial chatter” that then-President Donald Trump was planning to appear just five days later at a “virtual town hall” at the Lincoln Memorial.

A U.S. Secret Service representative separately emailed Adamchick that morning to say they were trying to get more answers about the event. “Sorry this is such a $#!t show,” the Secret Service employee wrote on April 28.

The records, released under the Freedom of Information Act, detail the behind-the-scenes scramble by Interior Department employees and law enforcement officials to mobilize equipment and security personnel ahead of Trump’s Fox News appearance from the Lincoln Memorial on May 3, 2020.

They also show Trump’s town hall damaged the national landmark — leaving behind marks on the floor.

The documents were released to journalist Jason Leopold and posted earlier this month to the National Park Service’s website. The Washington Post previously reported about the emails on Saturday.

Critics of the president accused him at the time of staging the interview at the Lincoln Memorial in a style that looked like a campaign spot ahead of the 2020 presidential election. The National Mall was closed for events at that time, which was during the early months of the Covid-19 pandemic (E&E News PM, April 30, 2020).

Then-Interior Secretary David Bernhardt allowed the president to use the inside of the memorial, which is usually not available for events, via a formal determination that argued the country needed Trump “to exercise a core governmental function to address the Nation about an ongoing public-health crisis.”

The emails released this month show that law enforcement officials were taken by surprise as the event was planned. Park Police officials were warned that they might have their days off canceled so they could work that Sunday. Contractors were told they needed to move loads of soil that had been stored near the memorial ahead of the event.

Security documents included in the emails detail requests that Park Police shut down vehicle and pedestrian traffic nearby. Forty Metropolitan Police Department officers were asked to assist with traffic control and possible protests, and the U.S. Coast Guard units that patrol the Potomac River near the Lincoln Memorial were also tapped.

One slide deck prepared by the Secret Service indicated the number of law enforcement and public safety agencies involved in securing the event. The document gave an overview of the manpower, including a counter assault team and counter sniper, as well as cars and fencing that would envelop the west end of the National Mall for Trump’s Lincoln Memorial appearance.

An incident briefing mentioned there would be tactical personnel from the Secret Service and the Park Police as well as “Plainclothes Assets.” Also included was a timeline for the day, with road closures beginning at “0400 hrs,” or 4 a.m., that morning.

Security concerns were raised about Trump’s town hall. A threat write-up went into vivid detail about the possibility of a population stressed by the pandemic being exploited by white supremacists, anarchists, conspiracy believers and anti-government groups to commit violent attacks. Further, terrorist organizations like the Islamic State group and al-Qaida had encouraged their followers to target events like Trump’s Lincoln Memorial interview, it said.

“The U.S. Park Police’s security commitment deemed necessary to protect this event is considerable,” the document said. “Such a large commitment of resources will certainly not be able to be accomplished with the current ‘steady state’ staffing levels currently employed.”

One document projected the cost of the event to the Park Police would be $103,000, a number that didn’t include “Sunday premium pay” for some employees. The force later asked to use nearly $147,000 in “emergency law and order” funds to staff the event, citing potential threats to Trump, including national anger regarding Covid-19.

The Park Police’s total personnel costs for the event came to just under $117,000, NPS spokesperson Jenny Alzelmo-Sarles told E&E News on Friday. The $147,000 request was granted, Alzelmo-Sarles added, but she was not sure how much of that total was used.

A Park Police lieutenant asked a sergeant in the force — who appears to have been planning to work at the Trump event — whether they had a short-sleeved shirt with stripes. “Negative,” the sergeant replied. They wondered whether a set of stripes could be borrowed and sewn on in time. “Otherwise, guess you get to learn a new skill,” the lieutenant wrote.

Agency officials moved quickly to rope officers into working, including canceling leave. This elicited grumbling among the ranks.

“My day off on Sunday is no more!!” exclaimed one assistant commander. “If you want to volunteer to work the event, please let me know,” said a commander. “Otherwise, we may need to force a few in.”

Trump may have left his mark on the Lincoln Memorial. The day after the president’s televised appearance at the landmark, an NPS official shared an after-action report.

“I wasn’t sure if this type of thing is necessary or where to store it,” the official said in an email. “Either way, I wanted to make sure it was documented in some way.”

The report said a morning-after walk-through revealed the tent company left behind debris like extension cords and lightbulbs. Further, damage was discovered.

“Inside the Lincoln Chamber there are several scratches and gouges on the flooring,” the report said. “Photo documentation taken and referred to the park’s senior management and Historic Preservation Division.”

An NPS official with the National Mall and Memorial Parks who was granted anonymity to speak candidly about the agency’s internal operations told E&E News on Friday that the scratches on the chamber’s floor were addressed by the park’s conservators, which incurred no cost.