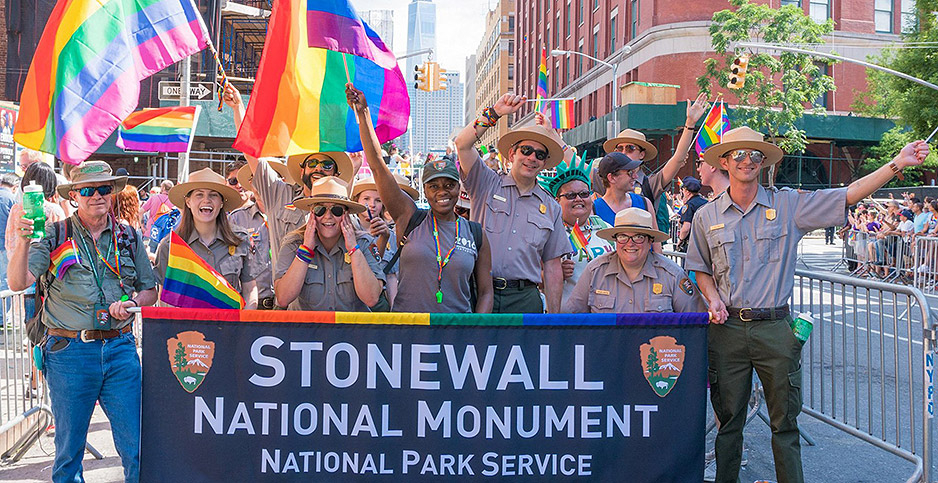 After spending $66 to buy a new 3-by-5-foot nylon rainbow flag, the National Park Service flew it high at one of the agency’s newest monuments: the historic Stonewall Inn in New York’s Greenwich Village, where a riot on June 28, 1969, launched the modern gay rights movement 50 years ago this week.

But a trove of emails released under the Freedom of Information Act shows how that flag decision set off alarms for Trump administration officials in Washington, D.C., in the fall of 2017.

Local gay activists boasted that it marked the first time a gay pride flag had been permanently placed on federal land, and a top official at the Interior Department quickly demanded an explanation.

"Can you please get details from NPS and report back?" Todd Willens, then an assistant deputy secretary — now the chief of staff to Interior Secretary David Bernhardt — wrote to another Interior official.

The 992-page cache of emails details what happened next: On Oct. 6, 2017, only five days before a ceremony to honor the flag’s arrival, Willens ordered the flag removed, setting off a scramble among NPS officials who sought to present a united front to explain the sudden reversal.

In the end, NPS and Interior officials had it both ways: The rainbow flag that signifies gay pride would fly at Stonewall, but on a flagpole deemed not on federal property, even though it’s inside the monument’s boundary lines and the park’s own superintendent assumed it was owned by the federal government. The NPS disposed of the flag by donating it to the New York parks department, which now owns both the flagpole and the flag.

While some local park officials were confused by the about-face, the Washington office signed off on a series of talking points to guide them.

Minerva Anderson, chief of communications for the National Parks of New York Harbor, appeared to follow the script when she told a top NPS official how she had described the transfer to a reporter.

"We partner with N.Y. city parks to manage Christopher Park, so we gifted the flag to them. Oy vey," she wrote to Jane Ahern, NPS associate regional director for external affairs.

With the pride flag still on full display under its new ownership, the public won’t notice anything different at the Stonewall National Monument when New York hosts WorldPride this weekend, celebrating gay liberation 50 years after the Stonewall uprising.

But nearly two years after the flag transfer, the Park Service is still taking heat from organizers of the 2017 event. They say the emails expose just how hard the Trump administration worked to distance itself from the LGBT community and its most cherished symbol.

"The feds were washing their hands of the whole project — it was crazy town; it was shocking," said Ken Kidd, an events organizer and a longtime activist from New York.

Kidd, who spent months negotiating details of the 2017 ceremony with local Park Service officials, said his relationship with them was "nothing short of terrific" but changed soon after officials in Washington began asking questions.

"The communication just changed completely and dramatically," he said. "There was a little bit of radio silence, and then, as the emails will attest, the message changed, and then suddenly the flagpole wasn’t part of the federal envelope."

Fears for safety at Stonewall

The message from Willens set off a chain reaction that involved NPS officials in Washington, New York and Philadelphia.

Ahern asked for a photo of the flagpole, telling a colleague that officials were "breathing down my neck at DOI." At one point, a press officer from Washington offered to help, even by changing a planned flight to Mexico if necessary.

The emails show that NPS officials knew the decision would ignite a controversy, coming only two years after the U.S. Supreme Court had legalized gay marriage and the White House was lit up with rainbow lights.

"Todd instructed us to remove all flags — U.S., NPS, the POW-MIA and pride flags — from the pole tonight," Bob Vogel, then the NPS acting deputy director of operations, wrote in an email to Mike Reynolds, then the NPS acting director. "He was OK with us donating all flags except NPS to the city. … Needless to say there is significant concern on how this will transpire with the community."

Reynolds replied quickly: "OK, thanks, and this could be a safety issue so we will stay close on how they are doing."

Vogel told Reynolds that the Washington communications office would issue a statement "once the job is complete."

That task involved Jeremy Barnum, the NPS chief spokesman in Washington, who sent a series of talking points to Willens for his approval, describing what to say if reporters asked about the flag: "The flag pole is not on federal property. The park raised the flag on September 28 as a part of a good-faith effort to respond to community interest. When it was determined that the flagpole is not on federal property, the flag was given to New York City Parks."

Barnum repeated those points last week when asked to comment on the flag.

Kidd said he doesn’t buy the explanation: "It would be quite irresponsible that they had maintained this flagpole and purchased the flag and flown it over a territory that didn’t belong to them. That just doesn’t make sense."

Barnum said the only part of the monument that is federally owned is Christopher Park, a 0.12-acre triangular space located across the street from the Stonewall Inn. Most of the 7.7-acre national monument is composed of open spaces or streets that were the site of the uprising but are owned and maintained by the city of New York, he said. The emails also include a copy of a survey from 2015 that shows the flagpole is located outside of the area that was transferred to the federal government.

Michael Petrelis, a gay community organizer from San Francisco, said he first asked the Park Service to fly the pride flag at Stonewall in 2017, a year after President Obama declared it a national monument.

"It was something that was necessary," he said. "When you have a national gay monument, you have to fly the rainbow flag, especially when you have a flagpole on your property. It was just really strange."

The emails were posted on the NPS website in response to FOIA requests made by Petrelis and WCBS NewsRadio 880.

In the emails, park officials said they discovered the flagpole was not owned by the federal government after reviewing their records. But it’s unclear what prompted the review.

"The first thing that stood out was the absence of substantive information about what the controversy was about," Petrelis said. "It was clear to me as longtime government transparency advocate that these were professional bureaucrats who knew not to memorialize in writing their substantive discussions."

Park officials understood the sensitivity. At one point, John Warren, a regional communications chief in Philadelphia, warned colleagues to be careful with their emails, writing: "Please keep in mind that this exchange could be subject to a FOIA request in the future."

Petrelis said the emails show there was no transparent process involving the transfer of any property from NPS to the New York parks department.

The Park Service declined to comment on the emails and would not say what prompted the review.

‘A beacon to folks all over the world’

While they’re both annoyed by NPS and Interior officials in Washington, Kidd and Petrelis said they had only good dealings with NPS officials in New York, who quickly offered to buy the flag and install it.

According to the emails, local park officials even waived a fee for a permit required for the Oct. 11 ceremony and offered to arrange for power and a sound system for the event.

When an employee first asked whether it would be appropriate for NPS to put up the flag, Shirley McKinney, the superintendent of Stonewall and other NPS Manhattan sites, replied in June: "The flagpole is our property and should be managed according to federal policy, so have at it."

But her tone changed in an October email, when she asked a colleague to get in touch with her as soon as possible: "I realize it’s probably your day off but can you please give me a call? I have a politically sensitive issue to run by you."

One came from a retired employee who worked for NPS for 34 years who called it the work of "misguided ideologues," likening it to the Park Service refusing to fly a POW-MIA flag at a federal military cemetery.

"The flag represents the very things that provide Stonewall with the significance to be a unit of the NPS in the first place and is emblematic of the site’s purposes," the retiree wrote. "Just because the current administration does not like the story of Stonewall does not lessen its importance to all Americans."

A New Jersey resident called the decision a "slap in the face to the LGBT community," telling Reynolds: "President Obama understood the importance of this site to the equal protection of all Americans. Donald Trump and his minions recognize only narrow-minded prejudice and discrimination."

To protest the decision at the ceremony, Kidd said he and other spectators took a knee during the performance of the national anthem and turned down a request by a local NPS official to speak.

Activists said the Trump administration once again showed its hostility to the pride flag earlier this month by telling U.S. embassies they had to keep it off their flagpoles.

But they’re happy that the tone is far different in New York, where city Police Commissioner James O’Neill this month formally apologized for the 1969 police raid, saying it was "wrong, pure and simple."

Even though it got rid of the pride flag, the Park Service said it remains committed to advancing the Stonewall story, "telling the history of all Americans in all its diversity and complexity."

Barnum said acting NPS Director P. Daniel Smith and David Vela, the agency’s acting deputy of operations, visited the monument in May, meeting with park leaders "to support efforts to share the important story and mission of Stonewall National Monument with park visitors, the American public, and the world."

The Park Service has worked with philanthropic partners to gather and record oral histories for the park as part of the Stonewall Forever project to commemorate the anniversary. Barnum said NPS employees will be among those heading to New York’s pride parade, riding in a double-decker bus hosted by the National Park Foundation. The Park Service also had other events connected with Pride Month in Philadelphia, San Francisco, Cincinnati and New Orleans.

Despite the controversy with the Park Service, Kidd said he’s just happy that officials in his hometown are proud to fly the flag at Stonewall.

"It’s a beacon to folks all over the world, instantly recognizable as a sign of equality," Kidd said.