Emails show skeptics’ plan to prod agency. ‘This is winning’ 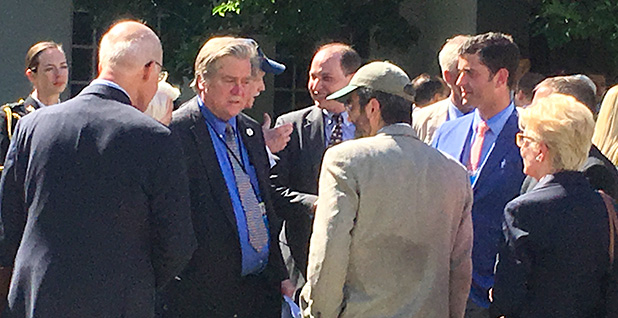 Joe Bast is a winner. At least, he thinks so.

The co-founder of a conservative think tank that decries global warming "alarmism" has declared quite a few victories since President Trump took office, according to a trove of emails recently released under a Freedom of Information Act request.

"This is what victory looks like," Bast wrote to allies last October, noting that "global warming" wasn’t mentioned in EPA’s strategic plan for the next few years. In January 2018, he emailed his supporters that Trump’s first year in office had been "a great year for climate realists." When Secretary of State Rex Tillerson was ousted, Bast wrote, "This is winning." And in March, he wrote, "More winning, this time at FEMA," referring to reports that the agency had cut climate references from its plans.

Bast — who was CEO of the Illinois-based Heartland Institute until January — has a point.

The Trump administration has taken action on some of the think tank’s top priorities, like announcing the U.S. withdrawal from the Paris climate accord, approving the Keystone XL pipeline, moving toward axing President Obama’s Clean Power Plan and proposing to dramatically scale back climate change research across the government.

The 1,884 pages of emails, released to the Environmental Defense Fund and the Southern Environmental Law Center, show how Bast and the Heartland Institute worked behind the scenes to influence federal climate policies.

EPA was a willing partner.

Agency officials coordinated with Heartland to include climate change skeptics in meetings about scientific integrity, to encourage positive reception of the Trump team’s actions among conservatives and to shape discussions about climate policies.

And Heartland isn’t done yet. It’s asking for plenty more.

On the group’s "Action Plan for President Trump," included in the emails, Heartland’s No. 1 recommendation is for a president’s council on climate change charged with "cutting through the bias that infected climate science and policymaking" during the Obama years.

That council doesn’t exist. Bast suggested in an email last June that he feared Trump would announce such a commission and put his then-chief strategist, Steve Bannon, in charge of it. "It would be the clever thing to do, though not the wise thing," Bast wrote. The better strategy, Bast wrote, was Trump’s "current tactic of simply not mentioning global warming, even when talking about the Paris Accord."

Heartland also advocated replacing EPA with a committee that represents all 50 states’ environmental agencies. And the group wants the Trump administration to ax EPA’s endangerment finding for greenhouse gases, which underpins climate regulations. That finding remains on the books.

Still, Bast has readily declared victories. He’s also expressed frustration for what he perceives is a lack of credit for his group’s efforts. Bast remains a Heartland senior fellow and a member of the board of directors.

After Trump’s June 2017 announcement that he would withdraw the United States from the Paris climate accord, Bast sent his allies a description of his trip to hear Trump’s Rose Garden speech.

"The Rose Garden is very pretty, the media are obnoxious … I’m happy to say I led the applause on several occasions, and even hooted and whistled a few times," he wrote.

Heartland and its donors, staff and supporters "poured millions of dollars and thousands of hours into making the case that global warming is not a crisis," he said. "We deserve some recognition, though the liberal media won’t give us that."

He noted that Heartland wasn’t mentioned in a New York Times story about how Republican leaders shifted their approach to climate science. "All the better they be kept in the dark about how we won that battle, so they will be equally unprepared to fight us in the next battle," Bast said.

It’s sometimes unclear whom the recipients of Bast’s messages are. He often seems to send mass emails to his allies in the climate war. He occasionally refers to his "GW posse," presumably referring to global warming.

EPA’s press office and the Heartland Institute did not respond to requests for comment for this story.

Last May, Konkus emailed Bast to request a list of scientists and economists who would be interested in receiving an invitation to an upcoming "scientific integrity" meeting slated for June. "If you send a list, we will make sure an invitation is sent," Konkus wrote.

A day earlier, The Wall Street Journal published an opinion piece titled "Anatomy of a Deep State" slamming EPA for not involving industry. Of the 45 invitations to the June event, the Journal wrote, one had gone to an industry group, while the rest went to academics and advocacy groups. Three went to the Union of Concerned Scientists, where the EPA scientific integrity official — career staffer Francesca Grifo — used to work.

The meeting was postponed due to an illness, the emails indicate. An EPA source said there have since been efforts to reschedule the meeting, and that industry groups were on the original and revised invite lists.

Konkus also appears to have reached out to Heartland for help rallying conservatives.

Last June, Konkus emailed Lakely at Heartland with a statement from EPA Administrator Scott Pruitt about international climate discussions in the wake of the announced U.S. withdrawal from the Paris climate deal. "Jim: I’ll call you on this below. Looking for some echo help here," he wrote.

Lakely replied that he was looking forward to the call, and Konkus wrote later that day, "Would be awesome if the headline/theme of whatever article/blog gets written is ‘Beyond Paris.’"

Pruitt recorded a video for a Heartland energy conference last fall, the emails show. His staff "said he was really fired up in the video and was happy to do it," Heartland’s director of government relations, John Nothdurft, told his colleagues in an email.

"These emails show members of Scott Pruitt’s inner circle extensively coordinating with well-known climate denialists to promote policies that attack the science and safeguards that protect our nation from the clear and present danger of climate change," said Ben Levitan, an attorney at the Environmental Defense Fund.

Bast loathes many of the reporters and media outlets covering climate change issues, the emails show.

Last September, he referred to a "fake news" story by Scott Waldman of E&E News, which described some of the critics of mainstream climate science who were being considered for spots on EPA’s Science Advisory Board.

Last September, Bast wrote that reporter Justin Gillis was leaving The New York Times. "Ding Dong the Witch is Dead," he said. "Still waiting for Chris Mooney and Juliet Eilperin at the WaPo and Seth Borenstein at AP to flame out."

When E&E News reported about Heartland’s closed-door meetings to push Pruitt on holding a climate science debate, Bast forwarded the article to his friends.

"This is annoying, but perhaps inevitable," he wrote. "The main purpose of articles like this is to sow dissent in our ranks. Our best response is no response."