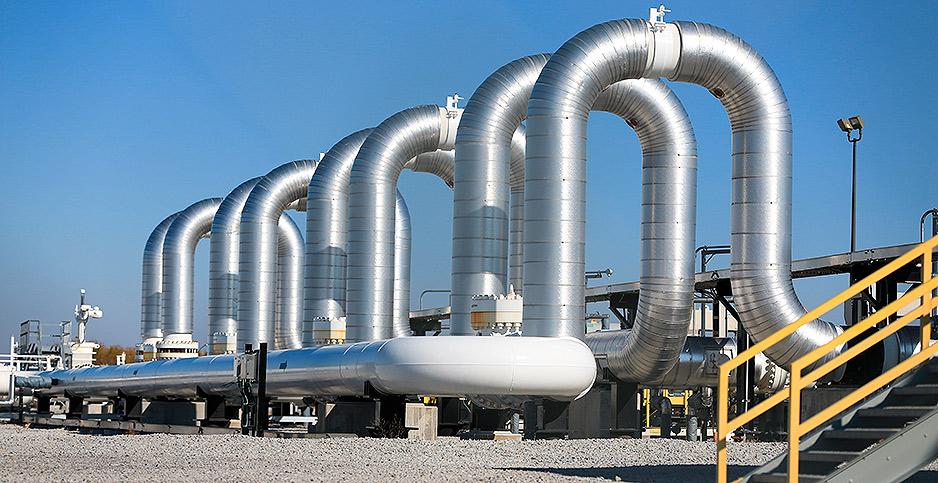 The Keystone XL pipeline, if built, would feed into the Keystone Steele City pumping station, above. Nati Harnik/Associated Press

A decision yesterday by Nebraska regulators to approve an "alternative" route for the proposed Keystone XL pipeline left organizers on both sides of the project claiming victory.

In a seven-minute meeting, the Nebraska Public Service Commission yesterday approved the Keystone XL application to cross the Cornhusker State as it ships oil from Alberta to Steele City, Neb., where it would connect to existing infrastructure leading to refineries on the U.S. Gulf Coast.

Following the PSC vote, Jane Kleeb, founder of the group Bold Nebraska, which formed to fight Keystone XL, said the decision "throws the entire project into a huge legal question mark" because the new route has not been federally approved.

"We will stand and fight every inch of the way," she said.

The route approved by the PSC was not TransCanada Corp.’s 275-mile preferred route. Instead, the commission granted permission to build the pipeline along a route that would angle more sharply across the northern part of the state toward the existing Keystone pipeline, which it would then follow for the final 100 miles through southern Nebraska.

In the 3-2 split decision, the majority said using the alternative route would secure for Nebraska taxpayers the economic benefits of building and taxing the project while limiting harmful environmental impacts.

Art Tanderup, a landowner who has been a key opposition organizer, fought off tears as he said, "We’re all going to work together, we’re going to get this thing stopped."

But some opponents described the outcome as at least a partial victory.

The Sierra Club highlighted TransCanada’s own criticism of the mainline alternative route in its application, where it said the alternative would increase the crossing of highly sensitive soils and ecosystems.

"Today, the Nebraska Public Service Commission rejected TransCanada’s preferred route for the Keystone XL pipeline, instead granting a conditional approval along a route the company claimed would be unworkable," the Sierra Club said. "Nebraskans, joined by millions of people across the country, have held off construction of this pipeline for more than seven years. Today’s decision is just one more step towards the inevitable end for Keystone XL."

Brian Jorde is an attorney with Domina Law Group, the firm representing affected landowners in the case before the PSC. Some of those landowners would also be affected by the approved route, while others are off the hook.

Following the vote, Jorde described the decision as an unqualified win for landowners. "They put all their eggs in the proposed route basket, so to speak, and that was denied," Jorde said of TransCanada’s strategy. The preferred route "was the only route that landowners testified on, and that was analyzed, and they were defeated 5-0," he added. "It’s an extremely gratifying victory for us and our landowner clients, that’s how we feel about it."

There are still opportunities to appeal the regulatory decision. And there are ongoing federal and state challenges to various aspects of the pipeline permitting case. Two federal permits, one from the Bureau of Land Management for rights of way across public lands in Montana, and another from the U.S. Army Corps of Engineers for the project’s water crossings, remain outstanding (Energywire, Nov. 20).

TransCanada was silent immediately following yesterday’s decision, waiting several hours before releasing a statement from CEO Russell Girling: "As a result of today’s decision, we will conduct a careful review of the Public Service Commission’s ruling while assessing how the decision would impact the cost and schedule of the project."

Organizations backing the pipeline, and President Trump’s "energy dominance" agenda, were quick to praise the decision.

"This project, which has been in the offing now for close to a decade, was always a smart call," said Thomas Pyle, president of the free-market think tank Institute for Energy Research. The pipeline would drive down prices for gasoline and other consumer products and increase U.S. energy security, he added. "Along with the Paris climate agreement withdrawal and the rescinding of the Clean Power Plan, the green light granted to Keystone XL in January that made this Nebraska decision consequential is a signature energy achievement of the Trump administration."

"While today’s Keystone XL pipeline approval is an important milestone, it does not provide certainty that the project will ultimately be built and begin operating," MacFarlane said. "Execution risk is likely to remain high."

MacFarlane pointed to TransCanada’s recent decision to cancel its proposed Energy East project, which would also have carried Albertan oil sands crude to refineries, as evidence of the risky environment in which pipeline developers now operate.

Some analysts have questioned the financials of the Keystone XL project in the face of falling crude oil prices that have hurt production growth from relatively expensive oil sands formations.

TransCanada recently held an "open season" to gauge shippers’ interest in utilizing Keystone XL, the results of which the company has not released. In a November call with investors, though, Girling suggested that the outlook was positive.

Girling told analysts that he expected support for the project to match earlier commitments.

Paul Miller, the company’s president for liquids pipelines, said the main questions at this point are about how shipping contracts should share project risk between TransCanada and its customers.

"It remains a ‘stay tuned,’" MacFarlane said of yesterday’s project development. "It’s just the latest installment in an ongoing story."

Last week, TransCanada reported a 5,000-barrel spill from the existing Keystone pipeline in a rural part of South Dakota.

Once again, that threw into sharp relief concerns about the project’s effect on the environment.

Nebraska regulators said use of the alternative route would limit the impact of the pipeline on numerous threatened and endangered species, including the endangered whooping crane habitat.

Rhoades said the commission erred in choosing an under-studied route that was never in serious contention. "It is clear that the applicant discarded the Mainline Alternative Route and never intended it to be considered," Rhoades said. She noted that the State Department, the lead federal permitting agency, did not analyze the alternative route.

A State Department spokesperson said yesterday that the agency was "in the process of gaining more precise information in order to determine if there will be any permitting impacts as a result of those changes."

Republican Commissioner Mary Ridder, the other dissenting voice in the opinion, criticized TransCanada’s proposed natural resource and mitigation plans, saying the company’s proposed strategy was unlikely to succeed in restoring the fragile and highly erodible soils found along northern portions of the approved route.