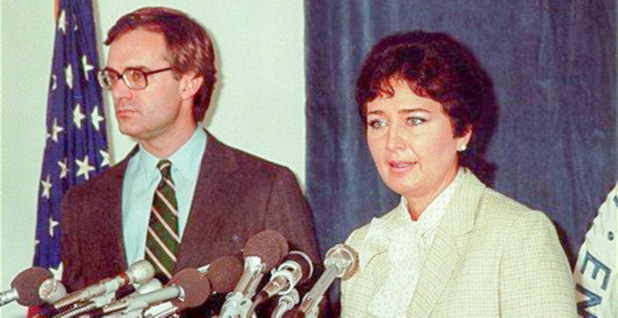 But some who worked in Burford’s EPA say things will be worse in the Trump administration.

As President-elect Donald Trump’s nominee to lead EPA, Scott Pruitt, heads to Capitol Hill for his confirmation hearing this week, current and former EPA staffers are recalling their not-so-fond memories of the early Reagan administration. They warn that things didn’t go well when EPA’s leaders were perceived as hostile to agency’s staff, top brass kept a "hit list" of targeted scientists, and key political appointees were fired or resigned under pressure from Congress.

"People are more scared now," said an EPA employee who worked at the agency under Burford. "There’s a tremendous polarization in the country and fake news," that person added. The "attack on science is more intense now."

Trump’s selection of Pruitt to lead the agency sent a troubling signal to many EPA staffers. The Republican Oklahoma attorney general has made a name for himself by attacking the Obama administration’s environmental policies — which many EPA employees have toiled over for years.

Pruitt said in a radio interview in November that the Obama administration had been acting "outside of the Clean Air Act and other forms of environmental laws to dictate in such a way to be anti-fossil fuel. And it was a let’s-pick-winners-and-losers mentality, and that’s not what regulation should be."

Under Trump, Pruitt said, "there’s going to be substantial change" at EPA and other agencies.

"The leadership of the EPA, the leadership of Department of Energy is going to be substantially important as we head into this new administration," Pruitt said in an interview taped before Trump picked him to lead EPA. "There should be much hope and optimism across the country for jobs and economic growth, because Washington is going to be less consequential."

Many industry insiders, congressional Republicans and other Pruitt allies have lauded his nomination. Conservatives and industry groups have long been calling for substantial reform to EPA regulations and the agency itself, which they have argued has surpassed its congressional authority and grown into an unwieldy bureaucracy.

In a statement praising Trump’s choice for EPA boss, Oklahoma Republican Sen. Jim Inhofe said, "Pruitt has fought back against unconstitutional and overzealous environmental regulations like Waters of the U.S. and the Clean Power Plan; he has proven that being a good steward of the environment does not mean burdening tax payers and businesses with red tape."

Pruitt is expected to face a contentious confirmation hearing tomorrow in the Senate Environment and Public Works Committee, but he’s expected to ultimately win confirmation in the chamber, where he needs only to secure the chamber’s Republican votes. And at least one Democrat, West Virginia Sen. Joe Manchin, has already suggested he’ll back Pruitt for the job.

But his nomination scares EPA employees.

Pruitt’s selection — on top of a recent clamor over the transition team’s request for the names of DOE scientists who worked on climate change — has brought widespread comparisons to the early 1980s.

The incoming Trump administration harks back to the beginning of President Reagan’s first term, former Republican EPA staffer Philip Angell said last month in an interview. Angell was chief of staff to Bill Ruckelshaus — who served under President Nixon as EPA’s first administrator and was hired by Reagan to lead EPA after Burford resigned in 1983.

Burford was widely criticized by EPA staff and stepped down amid a scandal involving the Superfund program. She died of cancer in 2004.

"The whole idea that you walk in and distrust the people that you’re going to rely on to carry out your policies within the agency" can be "very problematic," Angell said. And "that was a problem for Gorsuch," he said. She "kept herself isolated from most of the agency with a small band of advisers around her."

She and her political allies at EPA were known for keeping a "list of people they were concerned about," Angell said, including those considered "untrustworthy people" inside the agency.

The EPA "hit list," as it was dubbed, was a scandal for the Reagan administration at the time, and its alleged author was forced out of the agency.

In March 1983, congressional Democrats released a list of EPA staffers that they had received from an anonymous tipster, which noted 90 scientists on EPA boards and included "cynical comments on their competence and ideological outlook," Science reported then. The list included descriptions like "clean air extremist," "reported to be liberal and environmentalist," "get him out, horrible," and "very good, keep."

EPA official Louis Cordia was accused at the time of having compiled that and other political EPA documents.

Cordia had worked at the conservative Heritage Foundation and on the Reagan administration’s EPA transition team before being hired to work in the agency’s office of federal activities, United Press International reported. Cordia resigned after he was asked to do so by EPA’s then-acting administrator but said he hadn’t compiled hit lists of EPA employees.

Cordia told UPI that when he had worked on EPA’s transition team and at the Heritage Foundation, he had helped to compile recommendations of candidates to work in the agency, and worked on another document involving "pro and con assessments" of the performances of 600 to 700 EPA staff members and consultants. But he said that work didn’t relate to the work he was doing at EPA.

The political turbulence and sense of being targeted flustered EPA’s staff.

"I don’t think the career people at the time were at any way, shape or form accustomed to or had any reason to be singled out as a threat," said a former longtime EPA employee. "People were also upset about the fact that this barrage daily of terribly negative stories was appearing about their institution, which up until that time had a far better — if not shining — a far better reputation."

Looking back, that former employee said, "At this stage of the game, there’s more trepidation about Pruitt."

For one thing, Burford was "a complete unknown," the former employee said. She had been a corporate attorney in Denver and served in the Colorado House of Representatives, but wasn’t well-known on the national stage. "Gorsuch became more menacing and her reputation sort of got established in a less flattering way within the time after she was in the job," that person said.

One big difference between then and now, the current EPA employee said, is that Democrats were in charge of the House, where oversight was a top priority.

"I don’t think anybody really felt at the time that, ‘Oh, my God, this is really going to kill us,’" the employee said. "Nobody felt that the good guys were not going to prevail." But now, that person added, Democrats don’t have subpoena power.

The former employee said, "You hear a lot of talk these days getting to Pruitt; you hear people who are no longer at the agency saying, ‘I’m really glad we’re not around anymore.’"

That person added, "Maybe everyone will end up being pleasantly surprised, and maybe not. But we should be finding out fairly soon."