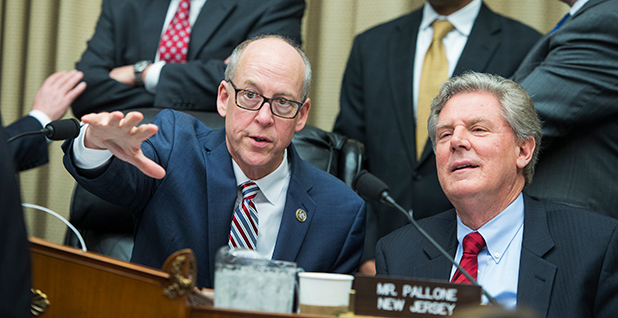 When Democrats took over the House, Energy and Commerce Republicans met to discuss their strategy on climate change. The result may be bipartisan action.

"I wanted our members, and I met with each one on our committee individually or in small groups, to tell me where they’re at and where they thought we should go," ranking member Greg Walden (R-Ore.), formerly the panel’s chairman, told reporters last week.

Their decision, evident in the hearings held so far in the Subcommittee on Environment and Climate Change,
was to develop their own message on the issue and to do away with the denial that has long defined the GOP.

"We now are speaking for our party on that committee and not allowing others to tell the public what they think Republicans are about," Walden said.

"I suffered through a lot of that and just ignored it. I said, ‘I’m not going to ignore it anymore; I’ll say what I’m for and what I’m not for.’"

The result is climate kumbayah on Energy and Commerce and an acceptance of science from its GOP members that would have been shocking just a few years ago and is still unusual in other committee rooms.

The chummy atmosphere on the House’s pre-eminent climate panel is raising hopes among Democrats that they might be able to substantively tackle climate change in the 116th Congress, after all.

"I think the reality is, if you listen to their rhetoric, that the Republicans on our committee have changed," E&C Chairman Frank Pallone (D-N.J.) told E&E News. "In other words, they’re now suggesting that they want to address climate change, and they recognize that climate change is real."

He added, "I think we should take advantage of it and see if we can get them to agree to some measures."

At a hearing on the Paris climate agreement last week, Pallone criticized subcommittee ranking member John Shimkus (R-Ill.), who had suggested in his opening statement that the agreement was not appropriately vetted by Congress, noting the alleged lack of emissions reductions in other countries. But Pallone was pointedly sure not to go too far.

"I’m not sure I want to criticize Mr. Shimkus, because he’s probably more of an ally on this than many on the other side of the aisle," Pallone said.

Shortly thereafter, during Walden’s opening statement, the pair bantered back and forth off the microphone, chuckling. The joke was apparently so funny that Pallone wandered over to staffers standing beside the dais and told it to them, too, laughing the entire time.

Shimkus, in particular, seems to have evolved on the issue quite a bit. At the hearing last week, he called for "smart and pragmatic" action on climate change.

He also authored an op-ed with Walden and former E&C Chairman Fred Upton (R-Mich.) last month in RealClearPolicy in which the trio said they have better ideas for addressing climate than Democrats.

Compare that with 2009, when Shimkus said climate change was against his religious beliefs because God promised not to destroy the world again after the Great Flood in the Bible (Climatewire, March 1).

Shimkus credited his change in tone to a trip he took to Greenland "five or six years ago" with the NATO Parliamentary Assembly.

"If you go to Greenland, you have to accept the fact that their climate today is different than their climate was 100 years ago," he said in an interview. "They’re growing vegetables where they didn’t used to grow vegetables, they’re worried about a northwest passage and they’ve got tourists up there now."

But Walden suggested that Republican attitudes haven’t actually changed much. Rather, they have a fresh message.

"If you go back and look at what we did, it was positive, innovative developments on the energy grid, on alternative energy, look at the hydro relicensing legislation we passed, to simplify that," he said. "If you look at the things we worked on and passed, they have positive climate impacts."

Shimkus gave a similar account, though he acknowledged a shift in his own views. Each Congress is "like a new child," he said, and the purpose of the Republican meetings was to take the temperature of the hearing room.

"Do you have any fire and brimstone people? Or where are we at today?" Shimkus said. "And that is reflected in our tone in bringing this debate to the forefront."

Walden, who in the past has not disputed human-caused climate change, boils down GOP ideas for addressing climate change into four "buckets": innovation, conservation, adaptation and preparation.

"I think it’s a worldview that accepts that the climate’s changing, and industry is a contributor to it, we’re going to need to do something about it, and we need to innovate our way out of it," Walden said.

Walden and his group of members are still contending with other factions of the GOP that remain solidly skeptical about climate science.

On the Natural Resources panel, for instance, Republicans shut down a hearing on climate change denial last month because they didn’t believe it was in their jurisdiction (E&E News PM, Feb. 26).

In the Senate, the Energy and Natural Resources Committee is moving forward with hearings on climate, but on the floor GOP leaders are focused on attacking the Green New Deal (E&E News PM, March 6).

Walden said he "can’t control" the opinions of members off the committee, nor of President Trump, who has continuously promoted false statements and conspiracy theories about climate science. But the Energy and Commerce panel is where the sausage gets made, so to speak, on energy policy.

"Somebody’s going to develop these new technologies," Walden said. "It ought to be us."

For all that talk, however, there are still few specific emissions reductions strategies coming from the Republican side of the dais. And it’s clear many of their members don’t believe the bell has tolled for the fossil fuel industry just yet.

At the E&C hearing last week, Republicans remained skeptical of the Paris Agreement and made claims about international emissions reductions with varying levels of accuracy (Climatewire, March 4).

They also repeatedly brought up the riots in France over the government’s fuel tax hikes in an effort to discredit taxation as a solution to climate change.

In the op-ed, Shimkus, Walden and Upton suggested "doubling down on innovation" by promoting renewable energy, carbon capture and nuclear development and removing barriers to advanced battery development.

"Innovation" has become a go-to climate buzzword for Republicans, but it’s not always clear exactly how it translates into policy, outside of pumping money into the Department of Energy’s research and development offices (E&E Daily, Nov. 28, 2018).

Indeed, part of the op-ed is a retrospective, touting U.S. emissions reductions over the past few decades, rather than looking at the steep declines scientists say will be needed to prevent average global temperatures from exceeding 1.5 degrees Celsius over preindustrial levels.

And not surprisingly, Republicans on the committee still appear to oppose carbon pricing regulations, though Walden didn’t rule them out when asked about them last week. Shimkus did not shut the door either but was still skeptical of the idea.

"I think that pricing will come out of the Ways and Means Committee, so we would have to see what they came out with," Shimkus said. "I’m not really a big fan of taxes. I’m still a Republican."

Shimkus added that he doesn’t think Republicans are necessarily obliged to come up with their own specific climate plan, despite their barrage of attacks against the progressive Green New Deal in recent weeks.

"I think our obligation is to work with the Democrats," he said. "They’re in the majority. We don’t have to lead with bills."

Still, Rep. Paul Tonko (D-N.Y.), who leads the Environment and Climate Change Subcommittee, said the "innovation" rhetoric, at least, could translate into some bipartisan policy wins.

In the committee’s immediate jurisdiction, that could include boosting funding for DOE research and beefing up energy efficiency programs, he said.

"Some of it is appropriations, some of it is not only reauthorizing programs, but maybe upgrading them and expanding them, especially with energy efficiency, weatherization and conservation efforts," Tonko said. "But we’re encouraged by what the tone is."

Shimkus said he doubts Republicans would be "upset with those types of proposals." The real debate for the GOP when it comes to broader greenhouse gas emissions reductions policy is how to do it without putting a dent in the economy, he said.

He’s also a fan of propping up nuclear power to reduce emissions, hailing from Illinois, a state that gets a substantial chunk of its power from nuclear.

On the Senate side, they could get a hand in those efforts from the Energy and Natural Resources Committee, where Chairwoman Lisa Murkowski (R-Alaska) held a hearing this week on climate change and the electricity sector (E&E News, March 6).

There, as on the Republican side of E&C, the conversation was focused on "innovation" and propping up renewables and battery storage through DOE’s research programs.

Murkowski told reporters after the hearing that there’s still "a lot of work ahead of us," noting that there isn’t talk yet about legislation to reform or prop up those programs.

Tonko suggested that the early agreement on expanding research and energy innovation programs could coalesce into a "package" of bills and even be a steppingstone to a price on carbon, one of his preferred policy ideas to fight climate change.

"I’m encouraged," he said. "I think there is some of that doable agenda that we want to go through where I think we can strike bipartisan, bicameral success, and I think the message here that we’re receiving from everyone in the first two hearings is that there’s urgency."