Energy and environment fights, deals play out this week 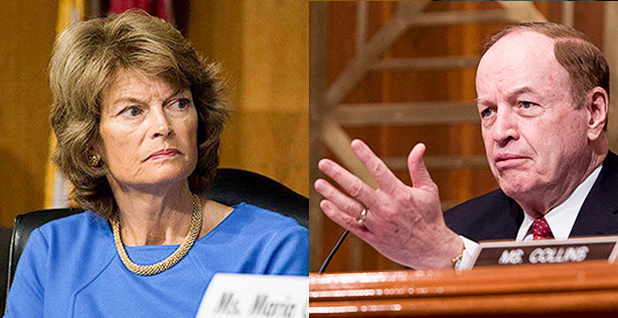 Congress this week will seek to make headway on fiscal 2019 spending bills that cover most of the federal government’s energy and environment programs.

The Senate is expected to begin consideration today of a package that for now contains the fiscal 2019 Interior-Environment and Financial Services-General Government appropriations bills.

It’s expected to be amended to also include the fiscal 2019 Agriculture and Transportation-Housing and Urban Development spending measures.

The Senate’s $35.9 billion Interior-EPA proposal moves to the floor after the House advanced its $36.3 billion version last week as part of a two-bill package with the Financial Services measure.

The Senate bill would maintain current EPA spending of $8.1 billion, while matching the House’s cut of $200 million for Interior to $13.1 billion.

Spending won’t be a major concern, but policy riders could be.

Senate Appropriations Chairman Richard Shelby (R-Ala.) said that attaching any riders would make it "more difficult" to move the bill and that he has had a working agreement with the top Democratic appropriator, Sen. Patrick Leahy (D-Vt.), to keep them off.

Indeed, the Senate has not passed a stand-alone Interior-Environment spending bill since the fiscal 2010 version, in large part because riders have derailed them.

The House did not shy away from add-ons that would alter environmental and endangered species policies when it moved its version last week (Greenwire, July 19).

The other expected bills in the Senate package would:

The so-called minibus contains fiscal 2019 funding for energy and water, military construction and veterans, and the legislative branch.

Lawmakers are aiming to settle on a final version that both chambers would then clear for the president’s signature. It has been stalled over a fight over how to pay for a proposed increased in veterans’ funding, which both parties back.

House Energy and Water Development Appropriations Subcommittee Chairman Mike Simpson (R-Idaho) last week confirmed disagreement over funding for veterans’ health care rather than debate over a nuclear waste repository at Nevada’s Yucca Mountain is to blame for stalling negotiations since earlier this month.

He said lawmakers still have time to reach a deal before the new fiscal year begins Oct. 1, even with the House due to be out of session for the month of August.

Asked whether Yucca is likely to be a point of contention after the veterans’ snag is resolved, Simpson said it "depends on the Senate."

The House bill includes funding for Yucca, but as in past years, the Senate bill does not.

Simpson was asked whether he thought Senate GOP leadership was prioritizing the Yucca issue to help out Nevada Republican Dean Heller, who faces a tough re-election campaign in the fall and has fought building the waste site.

"You’d have to talk to McConnell," he said, referring to Senate Majority Leader Mitch McConnell (R-Ky.).

Senate Energy and Water Development Appropriations Subcommittee Chairman Lamar Alexander (R-Tenn.) said Thursday that discussions on that title of the minibus are "moving along pretty well."

"We’re down to two of three issues, as we always are," he told E&E News. Alexander acknowledged that one of those issues "might" be the perennial fight over the nuclear waste site, but declined to discuss the discussions further.

"These are private negotiations that are proceeding very well among people who want to get a result, want to see the appropriations process work."

Meanwhile, House appropriators are expected to pass the final of their 12 annual spending bills this week when they mark up the fiscal 2019 homeland security funding measure.

It would boost Federal Emergency Management Agency flood mapping and disaster preparation by more than $500 million, despite calls by the administration for steep cuts (Greenwire, July 18).