Energy bill on standby with health care, budget in flux 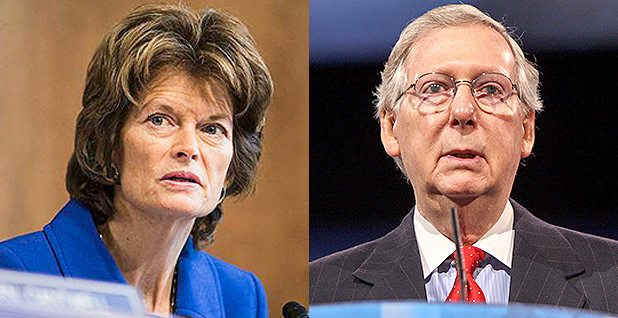 While congressional Republicans struggle to check off big-ticket agenda items from their to-do list before the August recess, bipartisan Senate energy legislation reworked from last year could fill the legislative vacuum in the coming weeks.

Majority Leader Mitch McConnell (R-Ky.) set the procedural wheels in motion to bring up S. 1460 directly to the floor, skipping the committee process and expediting the chamber’s consideration of the bill (E&E News PM, June 29).

A McConnell spokesman on Friday declined to comment on the floor schedule for the coming work period, which is currently set to conclude on July 28, launching a six-week recess, but lobbyists and staffers said they anticipate the energy bill coming up as soon as next week.

A legislative accomplishment would be welcome as the Senate stumbles over other priorities, including passing a budget and spending bills, as well as trying to repeal and replace the Affordable Care Act.

McConnell was forced to scrap a planned health care vote before the July 4 break, and GOP senators over the weekend said the weeklong recess did little to bridge intraparty disagreements, raising doubts about a vote planned for this week.

"My view is that it’s probably going to be dead," Sen. John McCain (R-Ariz.) said on CBS’s "Face the Nation" yesterday.

As for the spending blueprint, House Budget Chairwoman Diane Black (R-Tenn.) told constituents last week she was hoping to mark up a budget resolution in committee this week, although nothing had been officially scheduled Friday. Conservatives and defense hawks have been squabbling for weeks over defense spending levels and the size of mandatory cuts.

Passing a spending blueprint is key for GOP plans to enact tax reform through the reconciliation process, which will allow the majority to skip a Senate filibuster and pass the overhaul along party lines.

Even without a budget, the House Appropriations Committee this week will continue to mark up spending bills in committee, as leaders scramble to head off a possible government shutdown in September.

Senate appropriators, meanwhile, continue to hear from Trump administration officials over the fiscal 2018 request but have not yet unveiled any of their bills.

An opening for energy?

Despite bipartisan interest and McConnell’s efforts to smooth the way for the energy bill, long-simmering policy disputes and the general perils of legislating on energy cloud the path to a successful outcome in this Congress as well.

"This energy bill is, at its core, a bad bill that expands upon the billions of taxpayer dollars already given to the fossil fuel industry," said Bill Snape, senior counsel with the Center for Biological Diversity. "This special interest bonanza would take our country and our people in the wrong direction."

One contentious provision that drew the ire of environmentalists, which instructed federal agencies to consider biomass energy "carbon-neutral," is gone from the bill, having been enacted in the omnibus appropriations bill earlier this year.

Also absent in the new bill are provisions that were intended to streamline environmental permitting for renewable energy projects on public lands. One Senate aide said the measure was dropped by agreement between both parties.

A summary of the bill has not been released, but one revision that has drawn attention is the section setting building efficiency codes. Like last year’s bill, the new legislation outlines steps for the Energy secretary to take to "encourage" states, tribes and local governments to adopt such codes, which advocates say hold enormous potential to save energy and reduce emissions.

The new bill would add a requirement that the Energy Department consider whether revised codes are "economically justified," a nod to a dispute that was a stumbling block in conference talks last year. It also adds language labeling such codes as "voluntary."

The National Association of Home Builders, part of a coalition that supports language in a competing bipartisan House bill, H.R. 2361, last week commended Murkowski and Cantwell for attempting to bridge differences over approaches to measuring cost-effectiveness.

"They made a good attempt here, unfortunately it still doesn’t address all our concerns," said Billie Kaumaya, federal legislative director for NAHB.

Kaumaya lauded the explicit language emphasizing the voluntary nature of the codes but noted that, in practice, when states receive incentive funds to adopt such standards, they often end up being mandatory.

NAHB also has concerns with the "economically justified" criteria in the new bill, which Kaumaya said would allow DOE to consider cost savings over the life of an entire building.

"That’s just not realistic for most families," she said.

The inclusion of language highlighting the need for national energy and water conservation as a criterion is another concern. "That’s a little bit problematic for us because that could sort of justify any cost," Kaumaya said.

NAHB still prefers the "simple payback" period of 10 years or less for DOE to use when considering building codes included in the House bill, sponsored by Reps. Marsha Blackburn (R-Tenn.) and Kurt Schrader (D-Ore.).

"The 10-year simple payback makes the most sense," Kaumaya said, likening it to the mileage stickers shown on cars. "It’s easily understandable by the consumer."

The Alliance to Save Energy, which strongly supported the model code provisions from last year’s Senate bill, continues to review the updated bill, a spokesman said Friday.

In a statement, alliance President Kateri Callahan noted the group’s support for "how things worked out" with the Senate bill last year and vowed to work to "get a bill across the finish line with strong efficiency provisions that will create jobs, save consumers and businesses money, strengthen energy security and reduce harmful emissions."

The comprehensive energy package could also become a vehicle for two contentious pieces of legislation on pipeline permitting, which have been advancing in the House.

Changing the permit process for infrastructure has been a focus for the Energy and Commerce Committee this year, particularly for pipelines and hydropower. And while the bipartisan Senate bill includes several actions on hydro, it does not take action on pipelines.

H.R. 2883, opposed by most Democrats on Energy and Commerce during a markup last month, would remove presidential involvement for cross-border pipe and electricity transmission, transferring those authorities to FERC and DOE, respectively. Similar language was part of the House’s energy package last year.

The decision on whether H.R. 2883 will move forward as part of broader legislation will be up to panel and House leaders, an aide said, and sponsor Rep. Bill Flores (R-Texas) is preparing for both scenarios.

H.R. 2910, which also passed committee largely on party lines, would give FERC more authority during pipeline permitting and allow it to impose deadlines on other federal and state agencies.

A spokesman for the bill’s sponsor, Rep. Markwayne Mullin (R-Okla.), would not comment specifically on whether the congressman could use broad energy legislation as a vehicle but did say that he will "continue to work to pass his language to send to the Senate."

The House may also move this month on language that passed the Senate that would enshrine Obama-era sanctions against Russian energy projects, while also limiting the Trump administration’s ability to unilaterally dismantle them.

Before the July Fourth break, the Senate passed a technical fix to its bill that addressed a provision that the House said ran afoul of the Constitution’s requirement that revenue measures originate there (E&E Daily, June 22).

Democrats have also charged the House held up the issue in deference to the Trump administration, which opposes Senate language giving Congress time to reject any effort to ease sanctions. Major oil companies, including Exxon Mobil Corp. and Chevron Corp., are also lobbying against the Senate bill (Energywire, July 6).

The president’s meeting with Russian President Vladimir Putin last week has made the debate even more contentious, with the White House calling for flexibility and top lawmakers demanding tough action against Russia.