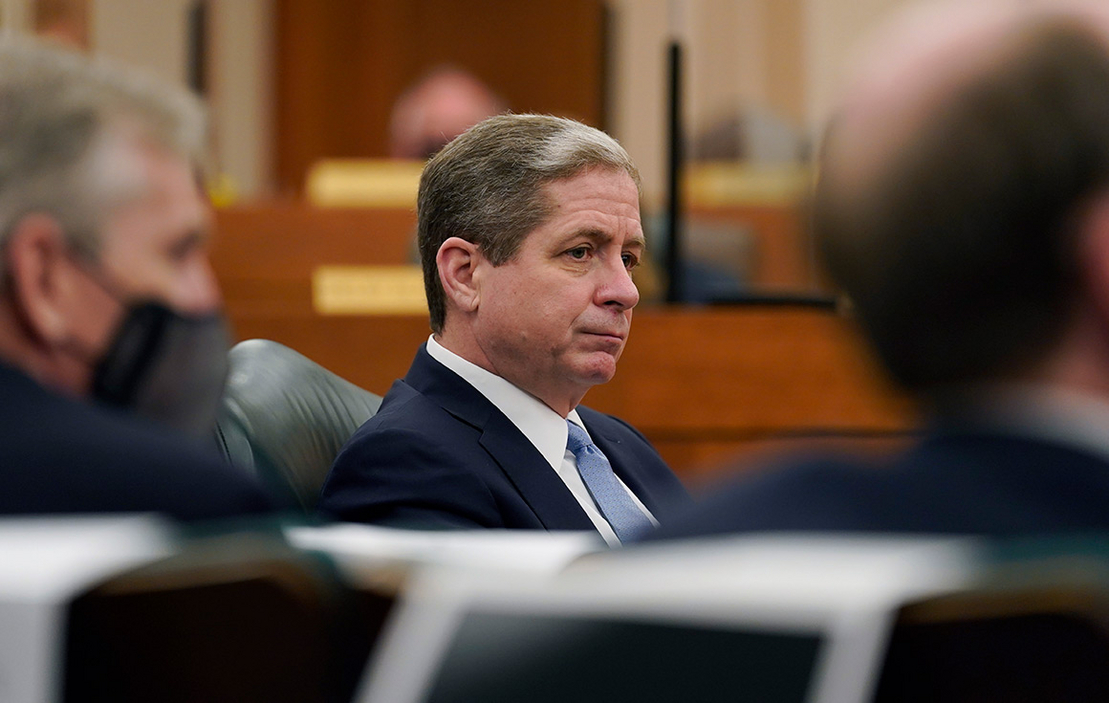 Vistra Corp. CEO Curt Morgan says his company is preparing its power plants for winter, but he has concerns about rising energy prices, oversight of Texas’ natural gas industry, and a plan for decarbonizing the power sector that’s teetering on the brink of collapse in Congress.

“I guarantee you I’m not getting any holiday cards from any of the gas guys,” Morgan told reporters Friday at the Midlothian power plant, a gas-fueled facility southwest of Dallas.

The fate of the proposed Clean Electricity Performance Program, or CEPP, remains uncertain in Congress given the potential lack of support from Sen. Joe Manchin (D-W.Va.). The New York Times reported that the plan would likely be dropped. The program would pay power providers that boost annual sales of clean power by 4 percent (Climatewire, Sept. 30). Vistra’s chief executive suggested his company could support the proposal if some changes were made.

Morgan, 61, also said natural gas remains critical to the power sector, and he worried that efforts to zero out carbon emissions are moving too fast nationally. Texas-based Vistra has a net-zero carbon emissions goal tied to 2050 as long as technology advances and public policy and market designs are supportive.

Above all, Morgan said the United States must work to avoid the sort of power crisis Texas experienced in February. That’s when millions of Texas customers lost power for hours or days as a freeze crippled the state. Over 200 people in Texas died because of the winter storm, according to a state tally. Morgan lamented that Texas’ gas system wasn’t better prepared.

“The gas players profit from the dysfunction of their own system,” Morgan said, describing how spiking gas prices from February will add to energy consumers’ costs over time.

Texas lawmakers have raised concerns about a proposal from the Railroad Commission of Texas that suggested certain gas producers could opt out of weatherizing. The commission has since issued a notice to the gas industry telling it to be prepared for the winter (Energywire, Oct. 12).

Andrew Keese, a spokesperson for the RRC, told E&E News via email that “the agency is getting ahead of the game and taking proactive steps to work with operators in preparation for the upcoming winter season.” Todd Staples, president of the Texas Oil and Gas Association, said in a statement that the “oil and natural gas industry is working with a sense of urgency to be prepared.”

What is your view of the CEPP?

We’re open-minded to the CEPP. However, the way it’s currently constituted, we think there’s some issues with it in terms of compliance and the ability to actually make it happen across the industry.

What we’ve been a proponent more of is just a direct carbon fee. And we think it’s transparent, and most economists believe that it would see a greater and more efficient decarbonization if we just put a price on carbon.

Would that be economywide for a carbon fee?

Can you say flat-out, ‘We do not support the CEPP’?

No, I can’t say that. We could support the CEPP with some modifications to it. It’s not our No. 1 choice. However, there would need to be some changes made to it.

For example, it has a 4 percent per year reduction in carbon, essentially. There should be something where there may be a longer period where you can average over that period. In one year, you could go down 4 percent, and then the other year, things could go up, and yet overall, you’re reducing your carbon footprint.

Are you worried about your electric retail or generation business or both if there were a CEPP?

We try to look at things more on an optimistic basis. I think we believe we can work within that framework.

Obviously, it’s going to have an impact on our fossil fuel fleet. But it would be more on the coal side, which we’ve already been out in front [of] in terms of announcing retirements of coal.

Especially in this decade, we [don’t] really see that big of an impact on our company if that were to be put in place. But we expect some effect longer-term regardless of whether it’s CEPP or some other mechanism.

There has been talk in the last week about a global energy crisis. Do you have concerns?

Natural gas plants are the marginal units, and they price power, so higher natural gas prices are good for our company. Having said that, I always get worried about when we see energy commodity prices rise as quickly as they have and they’re at that level because it has an overall impact on the economy.

I believe those that would like to see the economy and in particular the electric grid decarbonize, which we’re a supporter of, I think have a time frame in mind. The most fervent supporters of that agenda have a timeline in mind that I think is going to put an unnecessary tax on the American people because they’re driving up the cost of energy commodities.

This country has a tremendous amount of natural gas reserves, but [the] rig count is down in our country [from past years]. The asset managers that control the money in the economy are forcing many of those companies not to invest in fossil fuels. And many of their boards are making that decision, and the management.

What that leads to, obviously, is tighter supply and demand of energy commodities, which in turn increases the price. But I see it as an artificial change because we have plenty of oil and gas in this country. It’s just a choice not to invest in it.

It’s worrisome to me that we’re creating an artificial shortage that is unnecessary, and I think we’re going to have to balance the need to have a strong economy and for people not to have to pay too much for energy commodities along with decarbonization of the economy.

You have said President Biden’s push to decarbonize the U.S. power sector by 2035 is too fast and could have an extremely high cost. Is that still what you’re saying?

It really is. But I’m also seeing it now in the production of oil and gas.

I’m really worried about when we see higher power prices, higher natural gas prices, higher prices at the pump, chemical feedstocks. There’s just so much that goes in the economy.

And we’re all about decarbonization, but we have to do this in a way where it doesn’t bring the economy to its knees. And that’s what I worry about. We can do more damage with the solution to decarbonizing the economy than the actual carbon does to our economy.

We got plenty of resources in the country. There should be no reason that natural gas is at $5.50 or $6 [per million British thermal units]. The proper price for gas is probably in the [$2s].

Is 2050 a better timeline for decarbonization?

I don’t think any of us know for sure. But in my mind, that gives us enough time to develop new technologies.

You have been critical of the Texas natural gas industry. How are you feeling about Texas power this winter?

I still have some concerns because not everything that was in [recent] legislation is going to get implemented [before this winter].

I don’t dislike oil and gas companies. I just don’t think the rules of the road are well articulated, and they certainly are not put in place to make sure that the integrated gas and electric system [works]. That’s been my biggest issue.

And I think that is directly at the feet of the regulator of the gas industry.

The Railroad Commission of Texas?

Yeah. And that’s who’s supposed to step up and take a look at this and say, “OK, this is what we need to do to make sure our system works.”

Producers or gas pipeline companies or processors, I don’t have any issue with any of them. I think they should weatherize. I think that’s part of the game. They don’t have the proper oversight, and that’s what I’m mostly worried about.

And I think historically the Railroad Commission has been more of an advocate than a regulator. But we need ‘em to be a regulator now.

Do you feel the Public Utility Commission of Texas is heading in a good direction?

I absolutely do. I think we got a good PUC. I think they get it. Those guys are meeting all the time and having hearings, and they’re moving quick, but they’re doing it thoughtfully.

Some people have argued big companies like Vistra have more sway at the PUC. Do you agree?

I don’t think that’s true. I’m going to go see — hopefully, go see — the commissioners. We got a couple of new ones I haven’t even seen yet. The reason I haven’t seen them is because their calendar is full.

We put a lot of analysis, and we do a lot of work, and we’re able to provide that and to demonstrate our views on certain market designs. Maybe that gives us a little more influence, but that’s strictly because we’re doing the work, right? We’re providing them with information that is necessary.