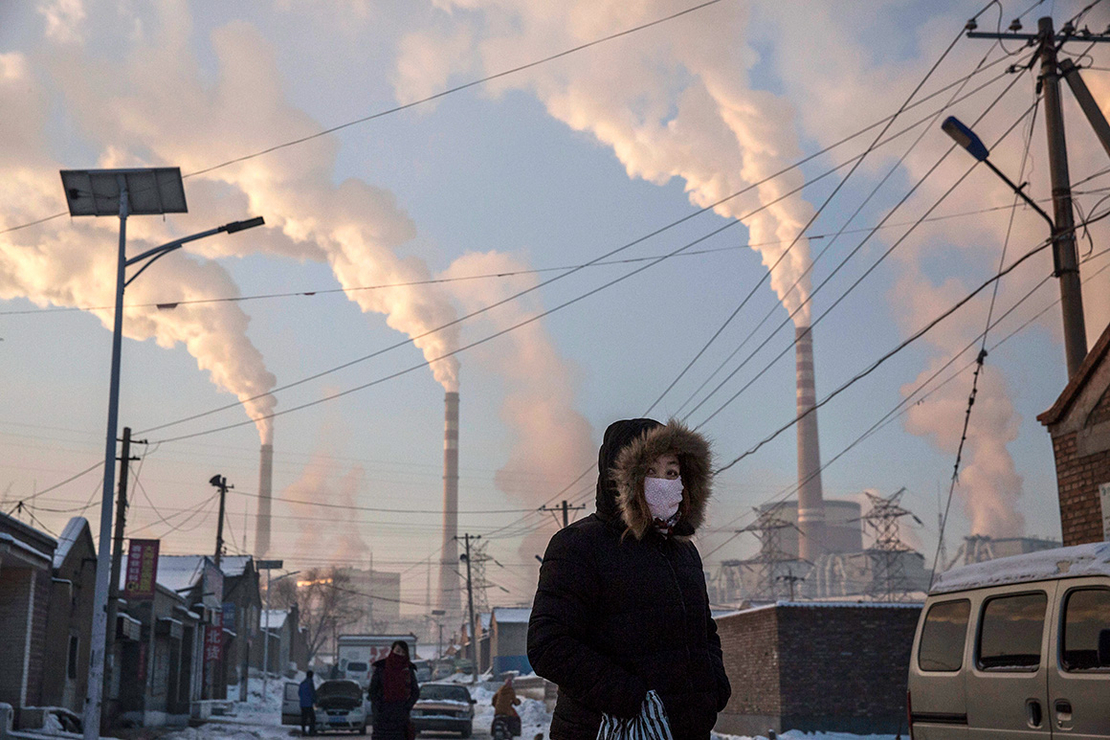 Smoke billows in the background as a woman walks through a neighborhood next to a coal-fired power plant in Shanxi, China. Kevin Frayer/Getty Images

An ongoing Chinese energy crisis has laid bare the challenges Beijing faces in trying to decarbonize one of the world’s largest economies.

The problem, in a word, is coal.

That reliance on coal, however, is why a global spike in coal prices has hit the country so hard. Making things worse is that China’s coal supply is down due to everything from weather to slowdowns in production to higher-than-expected energy demands. The situation has made it more expensive for factories and heavily emitting industries to operate and meet orders for goods coming from the United States and elsewhere.

“The exposure to coal was never such a liability before because coal was always cheap and plentiful,” said David Fishman, a China power analyst at the Lantau Group, a Hong Kong-based energy consultancy.

In response, China’s central government has ordered mining firms to ramp up production and stockpile enough coal to prevent power cuts during winter.

Those efforts could be seen as running counter to China’s climate pledges.

Last month, President Xi Jinping said Beijing would stop funding coal-fired power plants internationally. The promise builds on China’s own internal ambitions. China has committed to peak its carbon emissions before 2030, with a goal of achieving carbon neutrality before 2060. Earlier this year, Xi announced that China’s coal consumption would peak in 2025.

Quitting coal won’t be easy. About half of the world’s coal plants operate within China, and it has plans to add around 100 gigawatts of new capacity. Last year, it built over three times as much new coal power capacity as all other countries in the world combined, according to the Center for Research on Energy and Clean Air.

But the way China manages the fossil fuel presents its own problems — a situation that gives observers hope that China could turn the corner on coal.

China has a regulated power sector that has traditionally prevented power firms from passing on costs to consumers. So as the price of coal rises, some power generators have stopped or cut back operations to prevent losses.

That’s bad for coal because China — a one-party, command-and-control system — has put a particular premium on ensuring adequate energy and economic growth.

The government will avoid power cuts that affect residents at all costs, said Yan Qin, lead carbon analyst for Norway-based Refinitiv. Shutting factories is one thing, she said, “but if one person is shut in an elevator because of power cuts … when there are no traffic lights, hospitals don’t have electricity, that’s severe.”

For now, the power cuts have only hit residents in China’s northeast, with the rest confined largely to energy-intensive industries.

They have also occurred outside of a peak demand period, which indicates that the shortage is not due to a lack of coal generation capacity.

But that hasn’t stopped some interests such as the state-owned electric utility from pushing a narrative that new coal investments are needed, said Michael Davidson, an assistant professor focused on renewable energy in emerging markets at the University of California, San Diego.

“It’s a critical test for Chinese government planners, how they manage this,” he said.

On the one hand, they could view coal as the only reliable source of energy and rely on a massive coal buildout to ensure supply adequacy, he said. Or they could think about a more innovative combination of low-carbon energy and storage that could provide the same or even greater reliability.

“This is front and center of folks in Beijing right now: How much more coal do we need to build?” Davidson added.

Clean energy still on the table

The supply crunch has pushed the government to permit the use of more market-based power prices.

In the long run, that could create more competition in the coal sector, said Davidson.

He doesn’t think the crisis will change how China approaches upcoming climate negotiations. If it does come up, he said, the production increase will likely be framed as an emergency measure needed to keep the lights on.

Qin doesn’t expect the current energy crunch to affect China’s longer-term climate goals or its focus on renewables. In addition to dominating the world in coal, China is a leader in new wind and solar development. Last December, Xi pledged to almost triple wind and solar capacity to 1,200 GW by 2030, and Qin believes that public investment will happen regardless.

But it could dampen China’s near-term climate targets, including efforts to cap coal consumption and coal-fired capacity. While the state planner has reaffirmed the country’s carbon peaking and neutrality pledge and is finalizing a road map to get there, the power shortages are overshadowing discussions of immediate emissions reduction policies.

On Monday, the National Energy Commission indicated it will allow the build-out of new coal plants “according to development needs,” diminishing the chances of China’s applying stricter controls on coal in the near term, Qin said.

What she’s watching is the impact the power shortage could have on private investors’ awareness of energy security.

“If a factory would have rooftop solar, then at least it can produce half of the day instead of only one day a week,” she said.

A report by the International Energy Agency last month said China could accelerate its transition to clean energy by reducing coal use, scaling up renewables and improving energy efficiency. Under its current targets, renewables would need to account for almost 80 percent of the power mix by 2060 (Climatewire, Sept. 30).

What Fishman believes could do the trick is getting consumers to pay more for power.

“When you make coal power more expensive for end users, they change their behavior in ways that are beneficial: They use less coal power; they seek out renewables; they build rooftop solar,” he said. “It is good for the climate and good for energy goals.”