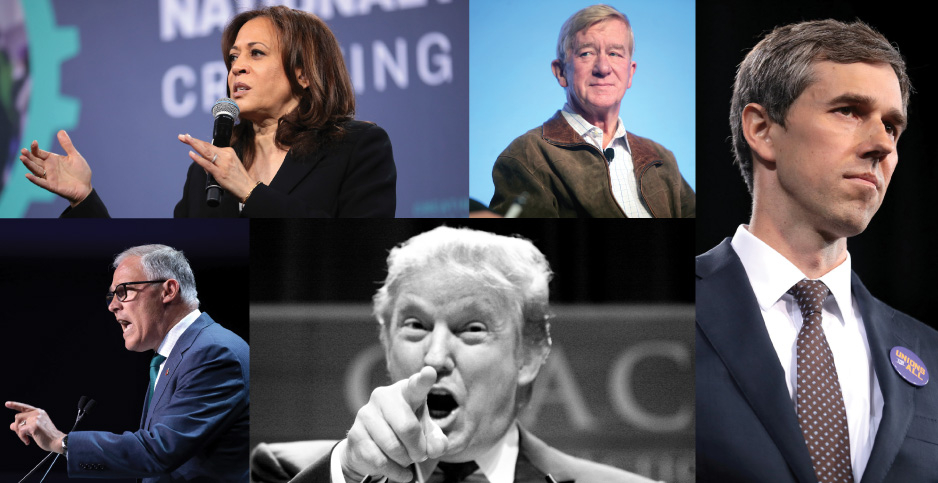 President Trump got big help in his reelection campaign with contributions from top executives in the fossil fuel industry.

An E&E News analysis of records that Trump’s 2020 campaign and the Trump Victory joint fundraising committee submitted to the Federal Election Commission show that oil and natural gas executives were some of the largest contributors to the president during the quarter that ran from April through June.

The donations came as the 2020 election cycle ramped up, when Trump formally launched his reelection effort and more Democrats filed to run against him.

Most of the more than two dozen Democrats vying in the presidential primary endorse plans to curtail or even eliminate the production and use of fossil fuels.

"Any energy company that wants to stay in business and is being honest would support the president who wants to celebrate what they do in terms of fueling the entire economy," said Mandy Gunasekara, founder of the pro-Trump group Energy 45 and a former EPA official.

Many observers had expected green groups would largely hold off donating to any of the more than two dozen candidates hoping to challenge Trump in 2020 until the Democratic field narrows.

FEC records, however, show some of them also took in major contributions from figures in the energy and environmental world, with many accepting money from clean energy businesses.

The biggest contributions to Trump went to the Trump Victory Committee. As a joint fundraising effort between Trump’s campaign and the Republican National Committee, it enjoys a $360,600 donation limit per donor in each election, compared with the traditional campaign limit of $2,800 each for the primary and general election contests.

Among the donors who hit that level were Kelcy Warren, CEO of pipeline giant Energy Transfer Equity; his wife, Amy; and Diane Hendricks, chairwoman of ABC Supply Co. and the only known donor to former EPA Administrator Scott Pruitt’s legal defense fund. Each of them also gave the maximum $5,600 to Trump’s main campaign committee.

A seat at the table

Harold Hamm, CEO of oil and natural gas producer Continental Resources Inc., gave $50,000 to Trump Victory and $200 to Trump’s campaign, FEC records show. He’s been a close ally to Trump since the 2016 election, when the real estate mogul counted him as a chief adviser on energy matters.

Lobbyist Jeffrey Miller was prolific in the second quarter in helping the Trump campaign. Miller, head of Miller Strategies, bundled more than $1 million in donations for Trump Victory, gave $30,000 to the joint committee and gave $5,600 to the campaign.

Miller has worked for many GOP politicians and is a key ally to Energy Secretary Rick Perry. He was a top adviser to Perry’s 2016 presidential campaign, was his main aide through his Senate confirmation process and now has numerous lobbying clients with business before the Department of Energy.

"Anytime you have an incumbent, there is a certain level of pressure to support that incumbent out of fear they could do something retaliatory," said Colin Strother, a Democratic political strategist in Texas.

At the same time, the oil and gas industry historically has played both sides.

But with climate change gaining momentum as a top-tier issue, individual candidates are distancing themselves from the fossil fuel industry.

While most Democratic candidates received at least some donations from rank-and-file employees at fossil fuel companies, higher-ranking officials at oil, gas and coal companies didn’t give much to them in the second quarter — perhaps due to nearly all of the Democrats signing onto the No Fossil Fuel Money Pledge.

Instead, they are getting their money from green advocates who want to see concerns about the environment addressed and are glad it’s front and center in 2020, as opposed to largely ignored in previous cycles.

Washington Gov. Jay Inslee, who has presented himself as the climate change candidate of the 2020 election, received $1,000 from Loren Blackford, an investor and the president of the Sierra Club’s board of directors. The group has not endorsed any candidate for 2020 but actively opposes Trump.

Inslee received a $500 contribution from California Air Resources Board Chairwoman Mary Nichols, who has been locked in a high-profile battle against the Trump administration over the administration’s plans to roll back vehicle efficiency and emissions standards. Inslee wants all new cars sold by 2030 to have zero emissions.

Other Democratic hopefuls have received money from the clean energy industry, although Inslee did get some of the top people in the field to donate to him. They include Alliance to Save Energy President Jason Hartke; GE Renewable Energy CEO Vikas Anand; and multiple executives at Invenergy, including President Jim Murphy.

Sen. Kamala Harris of California scored $2,600 in donations from Rose Marcario, the CEO of outdoor retailer Patagonia Inc. Under Marcario’s leadership, the company has been a vocal opponent of Trump’s public lands policies, most notably his 2017 action slashing the size of the Bears Ears National Monument in Utah.

One prolific donor in the second quarter was Edward Fenster, co-founder and chairman of Sunrun Inc. The solar industry leader logged contributions to Biden, Buttigieg, Minnesota Sen. Amy Klobuchar and even former Massachusetts Gov. Bill Weld, who is challenging Trump as a Republican.

Much of Sanders’ energy platform has long echoed the Green New Deal, including calling for an end to fossil fuel tax breaks and a federal jobs program for workers to build clean energy infrastructure.

John Hickenlooper, a former Colorado governor, emerged early as the Democrat who separated himself from backers of the Green New Deal. Yet his petroleum donations were not massive. Brent Morse, co-founder of Saga Petroleum, gave him $2,800, and James Shuss, a petroleum engineer, gave him $1,000.

Nick Loris, a fellow at the conservative Heritage Foundation, said these donations are just the beginning.

"I do think there is going to be competition because it is a pretty big pot of money that is available," he said, referring to all of the energy industry. There are "so many things that a new administration could do unilaterally that could help one industry over another."