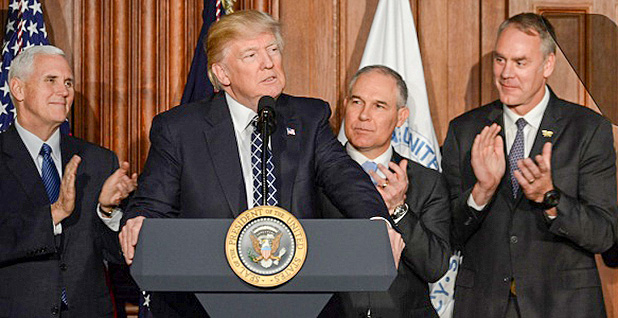 In his State of the Union address tomorrow, President Trump could highlight steps toward "energy dominance" and deregulation. Department of the Interior

When President Trump takes the podium in the House chamber tomorrow night, expect to hear him tout his administration’s work to bolster U.S. fossil fuels businesses.

"The president is a bit of an unpredictable guy," said Samantha Gross, a fellow in the Brookings Institution’s energy and climate initiative. "Given that, I would expect ‘energy dominance’ to be an important area."

Trump is likely to highlight the deregulatory agenda his administration has designed to achieve that dominance, Gross said (Energywire, Oct. 24, 2017).

The U.S. energy industry is headed for an upswing, but that has more to do with the discipline that a period of low oil prices has instilled in companies and less to do with the president’s policies, Gross said.

"But public knowledge of the energy industry is not very extensive," she said. "If he takes credit for the health of the industry, people may buy it."

References to "energy dominance" won’t play well with every audience member, though.

Since the oil embargoes of the 1970s, presidents have slipped glossy mentions of national aspirations to "energy independence" into their addresses, said Stephen Munro, U.S. policy analyst and editor at Bloomberg New Energy Finance.

Trump’s preferred phrase — "energy dominance" — is "what you get when you run ‘energy independence’ through Trump’s hyperbole meter," Munro said.

The president is also likely to extol "America-first" policies that have put the nation on a course toward becoming a net energy exporter, said Peter Shulman, associate professor at Case Western Reserve University.

Trump is less likely to mention Puerto Rico — one of the major energy stories of the past year, but not one that casts the president in a positive light, Shulman said.

Any references to the storm-ravaged island will likely focus on grid restoration efforts, he said.

Administration officials last week began to drop hints about what Trump might say in his speech.

"Stand by in the State of the Union: We’re going to rebuild our parks," he said Friday. "Here it comes."

Zinke has often suggested expanding offshore drilling in U.S. waters as a solution to addressing the parks backlog. Earlier this month, his department floated a plan to open up more than 90 percent of the outer continental shelf to potential development. Zinke quickly excused Florida from the program and is now fielding backlash from leaders in most other coastal states who want their own exemptions.

If he mentions the offshore plan, Trump is likely to highlight it as a promise kept, said Kevin Book, managing director of research at ClearView Energy Partners LLC.

"That’s very consistent with promises made in the campaign and likely to be cited as promises delivered," he said.

As for promises the administration has yet to fulfill, Trump could highlight infrastructure, Book said.

The Independent Petroleum Association of America will be listening for details on that front, said spokesman Neal Kirby.

"Energy infrastructure plays an important role in helping our member companies get their products safely and efficiently to new markets," he said.

Trump’s speech and the Democratic rebuttal from Massachusetts Rep. Joe Kennedy constitute "the least predictable State of the Union in a while," said Bob Perciasepe, an Obama-era U.S. EPA official and current president of the Center for Climate and Energy Solutions.

Trump might stick to championing high-profile steps to withdraw from the Paris Agreement and deregulate industry, while Kennedy could cast those actions as a failure to take up global leadership.

"You’ve only got a couple of minutes to hold everyone’s attention," Perciasepe said.