Energy, environment advocates get a bite of $3T behemoth 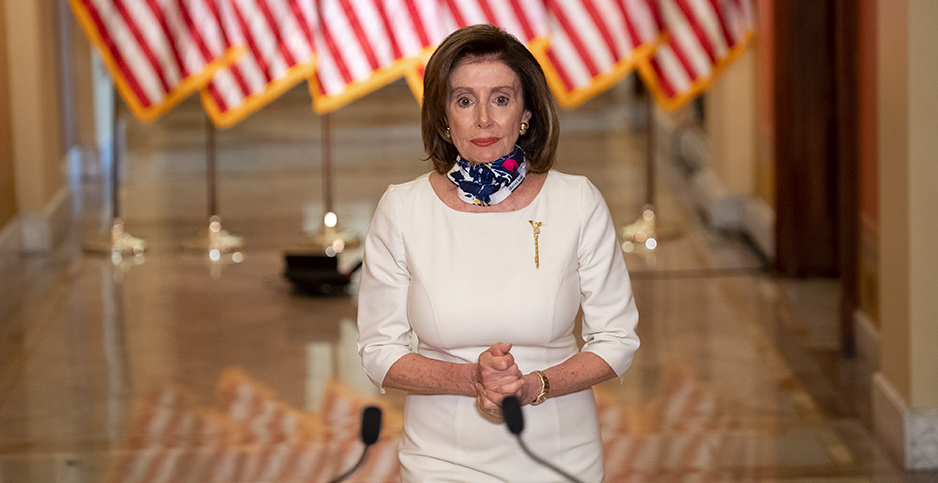 House leaders largely left out contentious energy policy and environmental aid provisions from the $3 trillion pandemic bill Democrats plan to pass later this week, but some priorities did make it into the massive package.

Yesterday, House leaders released H.R. 6800, which seeks to marshal the resources of the federal government to fight and recover from the crisis.

For energy advocates and environmentalists, the most notable aspect of the 1,815-page bill is what’s absent — significant new policies.

"We see little common ground on energy issues," ClearView Energy Partners said in an analysis of the bill, explaining why it believes many energy issues did not make it.

The White House and House Republicans have pushed for $3 billion for the Energy Department to buy enough domestic crude to top off the Strategic Petroleum Reserve to aid hard-hit U.S. drillers.

The money was not in the bill, but the effort got an unlikely ally yesterday when House Majority Leader Steny Hoyer (D-Md.) said he favored filling the stockpile, a sign that it could still be in play once the measure moves to the GOP-controlled Senate (see related story).

House Speaker Nancy Pelosi, in introducing the measure, focused on the aid for local communities and individuals and batted away conservative concerns about the enormous price tag.

"We must think big, for the people, now, because if we don’t, it will cost more in lives and livelihood later. Not acting is the most expensive course," the California Democrat said.

The largest slice of the pie would be nearly $1 trillion in aid to state and local governments to help them cover the costs of fighting the pandemic.

The bill, up for a vote Friday, would also provide $75 billion for virus testing, a move Democrats say would allow every American to get a free test.

And it would extend and build on a wide range of federal tax breaks and direct assistance payments with an eye toward stabilizing the economy.

The largest energy-related provision would allocate $1.5 billion to expand the Low-Income Home Energy Assistance Program, a politically popular grant initiative overseen by the Department of Health and Human Services that received $3.7 billion for fiscal 2020. White House attempts to cut it have consistently been rebuffed by Congress.

The legislation would also provide $1.5 billion in grants to help low-income families cover the costs of water bills.

The bill would bar states and utilities receiving pandemic aid from turning off any residential water service during the crisis because of late or delinquent payments.

EPA would receive $50 million under the bill for environmental justice grants. A summary states that those grants in part would go toward "investigating the connection between pollution exposure and the transmission and health outcomes of coronavirus in environmental justice communities."

The Interior Department would also see its coffers boosted, including $2.1 billion for the Bureau of Indian Affairs and $1 billion for building hospitals and other critical infrastructure in U.S. territories.

A provision in the bill stipulates that tribal aid in the previous Coronavirus Aid, Relief and Economic Security (CARES) stimulus bill and the current plan could only go to federally recognized tribal governments — a move that seems aimed at blocking the funding from going to Alaska Native corporations (E&E Daily, May 5).

The bill would also provide $71 million to the Fish and Wildlife Service for wildlife-borne disease prevention programs.

The U.S. Geological Survey would get $41 million for bio surveillance and research related to wildlife-borne disease, including for developing a national database of wildlife diseases with the potential to affect humans.

Aside from the funding, the legislation would amend the Lacey Act to allow the listing of species that pose a risk to human health to be labeled as "injurious," which would prevent their import or transport.

It would also allow for emergency listings and limiting the transport of injurious species across state lines to limit the spread of virus, a Democratic summary states.

The legislation does not contain a large-scale infrastructure package once pushed by Pelosi, who has more recently focused on pandemic priorities.

The legislation avoids controversial provisions proposed, and eventually scrapped, in the CARES Act that would have required airlines to reduce carbon emissions in exchange for federal loans.

The bill would shift $1 million to the Federal Aviation Administration to study whether the environmental control systems in commercial airliners recirculate pathogens in cabin air.

Under the bill, Amtrak would need to have passengers and employees wear masks or protective face coverings while on board. The rail agency received hundreds of millions in aid in the last pandemic package.

Senate Republicans made clear that they do not consider the House’s plan a serious legislative endeavor. And Democrats in both chambers privately concede that the House bill is a starting point for bicameral negotiations that aren’t likely to wrap up before Memorial Day.

Senate Majority Whip John Thune (R-S.D.) called the measure "a laundry list of agenda items that have nothing to do with the coronavirus but are part of their more permanent long-term agenda."

"It wasn’t a sincere effort or meaningful effort to address a crisis that is being faced by the American people, but it clearly is an effort to try and create talking points for the 2020 election," Thune told reporters after the Senate GOP caucus’s weekly luncheon. "It’s not going anywhere. And we all know that."

Senate Majority Leader Mitch McConnell (R-Ky.) continued to tamp down the need for additional COVID-19 stimulus, saying Republicans and the White House are evaluating the effectiveness of the more than $3 trillion already appropriated.

If congressional Republicans and the White House decide more relief is needed, "that’ll be the time to interact with the Democrats," McConnell said.

McConnell again insisted that future COVID-19 legislation would include "narrowly crafted" language to shield businesses and local governments from liability during the pandemic, which he described as integral to reopening the economy.

"Can you imagine the nightmare that could unfold this fall when K-12 kids are still at home, colleges and universities are still not open?" he asked.

"And that is a scenario that would only be further aggravated in the absence of some kind of liability protection that reassures school administrators that they can actually open up again, provided they do it safely and follow the guidelines, and began to return to normal."

But Senate Minority Leader Chuck Schumer (D-N.Y.) criticized McConnell for focusing on "something that is a barrier to getting things done."

"We have people starving; we have people being kicked out of their homes, and he’s worried about a big businessman being sued because he let one of his workers be susceptible to COVID?" Schumer said. "Come on, stop the ideological issues."

Click here to read a summary of the package.