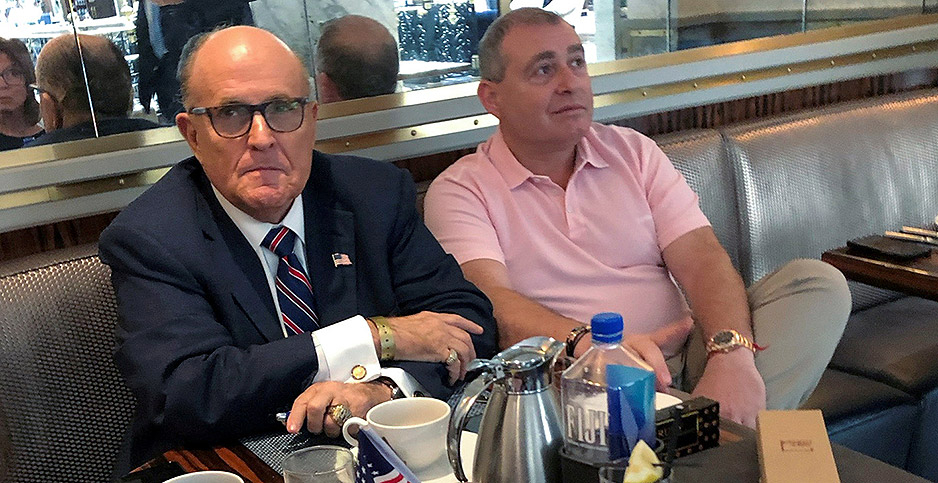 On a hot July day in Washington, Ambassador Kurt Volker sat down for coffee with Rudy Giuliani to convince him that the newly elected Ukrainian president was making an honest effort to root out the endemic corruption plaguing the former Soviet state.

When Volker arrived, he found Lev Parnas, a Ukranian-American businessman and energy executive, seated at the table with Giuliani, the former New York City mayor and President Trump’s personal attorney, according to Volker’s testimony provided to lawmakers during the House impeachment inquiry.

"He mentioned both the accusations about Vice President Biden and about interference in the 2016 election, and stressed that all he wanted to see was for Ukraine to investigate what happened in the past and apply its own laws," Volker said of Giuliani in his testimony.

Parnas, who is scheduled to be deposed Thursday as part of the House impeachment inquiry, was himself under investigation at the time of the meeting because of an unusual political donation by an energy company he founded. The Federal Election Commission is now looking at the $325,000 contribution from a company controlled by Parnas to America First Action, a super political action committee supporting Trump. The donation was on behalf of Global Energy Producers LLC, which Parnas founded, according to the Campaign Legal Center, a nonpartisan federal elections watchdog. The group described the company as "shady."

Global Energy Producers was formed in April 2018; it made the political contribution a few weeks later, amounting to one of the biggest received by America First Action in 2018. The donation was made before the energy company had a working website.

"Available records provide no indication that GEP had accrued sufficient assets, investment earnings, business revenues, or bona fide capital investments to make the contribution without an infusion of funds provided to it for that purpose," the Campaign Legal Center says in a complaint to the FEC that accused the energy firm of violating campaign finance laws. "Indeed, GEP only began taking bids to design a low-cost website after it made the $325,000 contribution, and still does not appear to have published the website."

Parnas, whom Giuliani has identified as his client, has enjoyed access to Trump and top Republicans as he sought to ramp up his energy company with Igor Fruman, his business partner. Parnas has been pictured dining with Trump and his son Donald Trump Jr., according to a report from the Organized Crime and Corruption Reporting Project and BuzzFeed. The men also met with officials from Naftogaz, Ukraine’s natural gas monopoly, to pitch their LNG business, according to news reports. They are being sued over a $100,000 unpaid loan to Global Energy Producers, according to the Miami Herald.

Parnas also sought to help Trump in other ways than just political donations. He acted as a go-between for Giuliani in Ukraine by introducing him to Viktor Shokin, the former prosecutor whom Biden publicly criticized for failing to address corruption.

Last month, Parnas told NPR that the purpose of the political donation was to get attention for the company’s energy business.

"I wanted to get notoriety for my energy company, and I felt it might be a great way to play with the big boys," Parnas told NPR.

Global Energy Producers was formed to capitalize on the burgeoning Ukranian energy market, as the country shifts away from its reliance on natural gas from Russia. Ukraine is trying to expand the production of its domestic resources while importing more oil and coal from the United States.

The Trump administration has treated the country as a key part of its "Energy Dominance" agenda. Energy Secretary Rick Perry oversaw the creation of a policy that sends more American coal to Ukraine.

During the now-famous July call in which Trump pressured President Volodymyr Zelenskiy to investigate the Bidens, the Ukranian president noted that the country was buying more American oil. The Trump administration has also worked to increase American liquefied natural gas exports to Europe.

The mission of Global Energy Producers appears tailored to meet the needs of that U.S. energy policy.

"Global energy producers was founded by a group of business leaders, representing several complimentary industries," the group wrote in an online ad seeking a designer for its website, which has yet to be launched. "Our goal is to capitalize on opportunities around the world by leveraging both domestic and international relationships. We are a United States based company transacting in LNG, oil and gas and solar energy, amongst others."

The Ukranian energy industry is still in a period of transition, as it tries to shift toward an independent market after being a state-controlled entity in the Soviet Union, said Nikos Tsafos, a senior fellow with the Energy and National Security Program at the Center for Strategic and International Studies.

When Ukraine’s energy industry was privatized after the downfall of the Soviet Union, wealthy oligarchs eventually seized control of it. As a result, the market can be murky, Tsafos said. There has been a longtime effort to bring the Ukranian market in line with European rules, but that is still an ongoing process, he said.

"There are layers of opaqueness and nontransparency," Tsafos said.

Lawmakers may seek to pull back some of that opaqueness this week as they investigate Parnas’ company, his work with Giuliani and his efforts to connect figures in Trump’s orbit with Ukranian actors. Democrats involved in the impeachment inquiry plan to press Parnas on a long list of topics, according to the subpoena.

They include efforts by Parnas and Giuliani "to induce, compel, petition, press, solicit, request, or suggest that current or former Ukrainian government officials, politicians, or other persons or entities associated with or acting in any capacity as a representative, agent, or proxy for any such individuals, investigate matters related to Burisma Holdings Ltd., Paul Manafort, Hunter Biden, Joseph Biden, the Democratic National Committee, Hillary Clinton," the subpoena says.