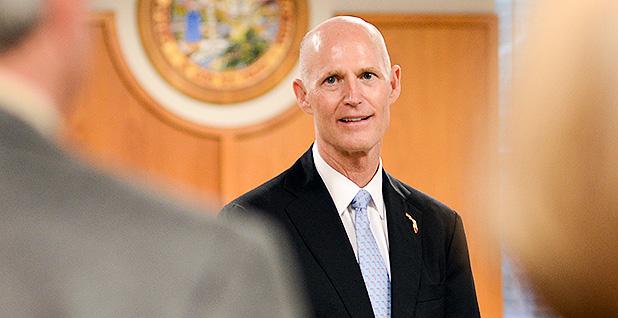 Seeking cash for his Senate bid, Florida Republican Gov. Rick Scott will lunch in Oklahoma City next week with a handful of high-powered energy industry executives.

Scott, whose campaign announced a record fundraising quarter this week, is perhaps the national GOP’s most important Senate candidate.

A favorite of the Trump administration and industry heavyweights like the Koch brothers, Scott faces vulnerable Sen. Bill Nelson (D) in a race vital to GOP hopes of preserving its Senate majority.

An invitation to the fundraising lunch obtained by E&E News lists a who’s who of Oklahoma oil and natural gas executives, many with tight relationships to the administration and other top Republican candidates.

Also on the list is Joe Craft, president and CEO of Alliance Resource Partners LP, one of the nation’s largest coal companies. Operating mainly in Appalachia, Alliance is based in Tulsa, Okla., where Craft lives.

The lunch will take place in Vast, a downtown Oklahoma City restaurant set in the Devon Energy Center building, which includes the corporation’s headquarters.

A restaurant employee confirmed a noon reservation for Thursday under the name Jon Bargas, the Devon Energy contact listed on the lunch invitation.

Bargas is listed as Devon Energy’s supervisor of public and government affairs on documents filed with the Federal Election Commission.

The invitation states that Oklahoma Sens. Jim Inhofe (R) and James Lankford (R) will also attend and that Gov. Mary Fallin (R) is invited. The senators’ offices did not respond to a request for comment.

For the executives slated to attend, their support for Scott ties into larger political advocacy trends and ties to the administration.

The Scott campaign invitation was distributed by Nichols, the Devon Energy founder and former director, who invites attendees to "consider contributing the maximum of $5,400 (or $10,800/couple) to Rick’s campaign," noting Scott’s "strong pro-business record in Florida." The campaign did not respond to a comment request.

The lunch looks to augment Scott’s already hefty bank account. This week, the campaign announced $10.7 million raised in the second quarter of 2018, more than any Senate candidate over a three-month stretch this cycle.

The two-term governor has tremendous personal wealth — and has shown a willingness to wield it in past campaigns — but that figure includes no loans from the candidate, according to the campaign.

In an early show of force, Scott’s camp and a supporting political action committee have combined to reserve nearly $20 million in television ads, a remarkable figure this early in the election in an expensive state.

"Floridians want a senator who will put our interests and our future first as Bill Nelson has, not the coal, oil and gas barons from out of state that Scott is partnering with," Jackalone said.

The governor ordered state water managers to halt the bloom, which now covers 90 percent of Lake Okeechobee, is running down the Caloosahatchee River and is heading for the southwest coast.

Studies show that nutrient-rich runoff from industrial farms is a primary cause of the algal blooms, which have become a yearly issue.

Environmental groups blame Scott. Over his eight-year tenure, Florida has cut environmental regulations, reduced water agency budgets and diverted money from a land conservation fund. His record shows a cozy relationship with Florida’s agriculture sector, the Everglades sugar industry in particular, along with the powerful utility sector. Donations from these interests are expected to be a major part of Scott’s campaign finance filings, which are due Sunday.

In his first bid for governor in 2010, Scott ran on expanding offshore drilling but has since reversed that position.