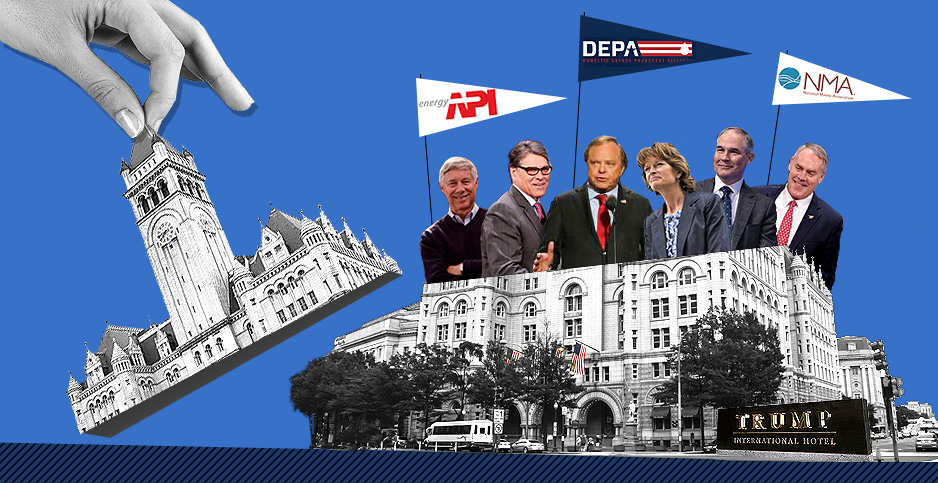 The Trump International Hotel rolled out the red carpet last summer for the two coal companies that have done the most to curry favor with the owner of the Washington, D.C., luxury destination: President Trump.

Under their names, hotel staff wrote the pair paid a "High Rate" — putting them on a lengthy list of hotel guests since Trump took office who are actively lobbying the White House on energy.

The money spent at Trump International seeps into the pockets of a self-proclaimed "energy dominance" president.

Trump refuses to sever business ties with the Trump Organization, which began leasing the Old Post Office building from the federal government three years before the president clinched the White House. The hotel is now at the center of lawsuits in New York, Maryland and the District of Columbia. Prosecutors argue Trump is illegally profiting off his presidency, seeking a declaration he’s violating the U.S. Constitution’s emoluments clause.

"While the emoluments clause prevents officials from being beholden to foreign or domestic entities, we need to ensure that those same influence peddlers are not improperly steering policies, mission or programs," said Project on Government Oversight attorney Scott Amey.

Murray and Lovell arrived the same day as Trump International played host to a reception for the American Coalition for Clean Coal Electricity (ACCCE).

The trade group, which counts Murray Energy and Alliance Resource as members, lobbies the White House to help coal.

The reception’s invite list included Deputy EPA Administrator and former Murray Energy lobbyist Andrew Wheeler, according to documents obtained by the Sierra Club under the Freedom of Information Act.

ACCCE declined to provide a guest list, but public agency calendars do not show that Wheeler attended the reception.

By that point, former EPA chief Scott Pruitt had resigned and Wheeler was in charge on an acting basis at EPA headquarters, located directly across the street from Trump International.

"We are not trying to curry favor with President Trump," ACCCE President and CEO Michelle Bloodworth said. "We had a reception there the night before our board meeting because it was a nice location and convenient."

"We have low cost/volume arrangements at other hotels," the company stated.

Critics argue that receptions and overnight stays seem innocent, but lobbyists and power brokers have turned Trump properties into strategic access points to promote their agendas to senior government officials.

"A government based on cozy relationships is what our Founding Fathers wanted to avoid," Amey said, "and we need to be reminded of that on a daily basis."

Others, like Barry Worthington, executive director of the U.S. Energy Association, said they don’t see hosting events at Trump International as a "line to the White House." The hotel, he said, is centrally located and competitive with other venues in D.C.

Ethical questions have surrounded the president’s hotel, but 1100 Pennsylvania Ave. remains a business and pleasure hot spot for energy executives and lobbyists visiting the swamp.

Oil, coal, natural gas and mining interests have spent hundreds of thousands of dollars at hotel events frequented by top administration officials, according to documents E&E News and the Sierra Club obtained under FOIA. Federal workers regularly stop by what one Department of Energy staffer called "Republican Disneyland."

America First Action spent at least $395,068 on rooms, food at steakhouse BLT Prime and lodging at the hotel, according to Federal Election Commission reports. The group did not immediately respond to a request for comment.

Overall, as one of the nation’s biggest PACs, America First Action raked in $39 million and spent $29.3 million during the last election cycle. Cash went exclusively toward electing Republicans backing the president’s energy dominance and regulation-slashing agenda.

At least $7.2 million of that cash came from energy executives and companies.

Harold Hamm and his oil company, Continental Resources Inc., gave $1.05 million, according to the Center for Responsive Politics. Hamm sits on the board of directors of the nonprofit behind the super PAC, America First Policies, which is chock-full of Trump acolytes like former White House spokesman Sean Spicer.

As for money given to the same nonprofit’s political arm, American First Action, Chicago-based steel pipe maker Wheatland Tube LLC gave $1.75 million, according to the center.

Murray Energy made the million-dollar donor list along with GeoSouthern Energy Corp.

Donating $50,000 was Don Hoffman, a nuclear executive and former member of the president’s leadership council.

West Virginia Republican Gov. Jim Justice, who like Trump has refused to give up business holdings, including coal mines, gave $27,500.

An additional $5,000 came from Dan Eberhart, the CEO of Canary LLC, a Colorado-based drilling services company and one of the largest private oil field service companies in the nation. He is a policy adviser to America First Policies.

With Trump’s name in gold across the street from EPA headquarters, Pruitt connected the dots for numerous energy industry visits to the luxury hotel before resigning last year amid mounting ethics scandals.

The former Oklahoma attorney general lives in Tulsa, as does coal operator and GOP megadonor Craft.

FOIA documents show the two texted during Pruitt’s time at EPA (Climatewire, Sept. 13, 2018). Pruitt has since done work for Craft, The Washington Post reported in December.

Craft himself met Pruitt "at the designated entrance" when Pruitt attended an Alliance Resource meeting at Trump International in 2017. The calendar entry for the rendezvous included a note from EPA ethics attorney Jennie Keith stating: "There are not ethics concerns with respect to this event."

"Unfortunately I am not able to attend the dinner with Scott and Ambassador MacNaughton," Knight Craft wrote in an email, which included a note, "Sent by my coal powered IPad."

"I appreciate the invitation and look forward to having this dinner later in summer," the email said.

Pruitt attended Knight Craft’s swearing-in as ambassador in September 2017. An attorney representing Pruitt did not immediately respond to requests for comment.

Later that year, Hamm and DEPA had a breakfast meeting with Pruitt in Room 715 at the hotel.

A Tulsa-based natural gas pipeline company, Williams Cos. Inc., held its 2017 board meeting in the Patton Room at Trump International.

Williams spokesman Keith Isbell said he is not aware of any other company events held at Trump International.

EPA staff members also paid plenty of visits to the hotel across the street from their offices. Most patronized the hotel’s Starbucks, grabbing coffee with journalists and energy lobbyists.

For instance, shortly after leaving his post with petroleum company Hess Corp. to lead EPA’s congressional relations office in April 2017, Troy Lyons set up a coffee meeting with Bill Koetzle, who was a Chevron Corp. executive at the time. Koetzle has since joined the American Petroleum Institute.

Pruitt also got invites but did not attend events held at Trump International by the Louisiana Association of Business and Industry and American Fuel & Petrochemical Manufacturers, according to documents obtained under FOIA.

Not only has Trump’s hotel seen a parade of energy executives, but it is a popular destination for industry advocates and the Trump officials they lobby, with many tagging their location on social media.

Journalist Zach Everson tracks all those comings and goings on his blog, 1100 Pennsylvania, and other social media outlets. In one tweet last year, Everson noted at least nine members of Trump’s Cabinet visiting the hotel.

Documents that Everson obtained via FOIA show that an SSEB staffer made Williams’ dinner reservation at BLT Prime, but federal officials insisted Williams paid for his own meal.

While the president’s hotel played host to nearly every top fossil fuel trade group after Trump’s election, none appear to be returning this year.

"I suspect that’s because they must book meetings a couple years in advance; many wanted to book Trump Hotel early in his presidency to signal a welcome to Washington," a former coal industry representative said, adding, "And now, having paid their respects, [they] no longer feel an obligation."

The American Petroleum Institute held two annual board meetings in a row at the hotel.

In 2017, then-EPA boss Pruitt addressed oil and gas’s elite on day one of the two-day meeting, and he reportedly pitched the industry group to help fill a host of empty regional director positions. Zinke spoke on day two.

When API returned a year later, a spokesman said the organization had signed a multiyear contract with the hotel "well before the election" (Greenwire, March 15, 2018).

Yet when asked about that contract recently, API spokesman Ben Marter said no contract exists and no plans have been made for future events at Trump’s venue.

IPAA spokeswoman Jennifer Pett said this year’s call-up will be at a different venue.

No other NMA events at Trump International have been reported since.

"It is our policy not to discuss the details of any non-public events," said NMA spokeswoman Ashley Burke.

For all the controversy, the U.S. Energy Association’s Worthington said that when his organization held its 2017 holiday party at Trump International, the decision hinged on his recent knee surgery — not trying to connect with the Trump administration. USEA, a member of the World Energy Council, counts both fossil and solar boosters among its members.

That year, Worthington said there was no space available in the Ronald Reagan Building and International Trade Center, where USEA’s headquarters is located. Last year, USEA was once again able to host its annual holiday party at the Reagan building, he said.

Worthington is no stranger to the Trump administration’s energy policies. In 2017, he appeared on a White House-organized panel at the climate talks in Bonn, Germany, to discuss the future of fossil fuels and nuclear power before the event was derailed by singing protesters.

But Worthington said the couple of lunch dates he’s had at the hotel and USEA’s holiday party have nothing to do with that work.

"USEA has no business at the White House at all. We’re not asking them for anything," he said, adding that he also doesn’t socialize after hours in the glitzy lobby. "And I’m not a socialite, I go home after work."