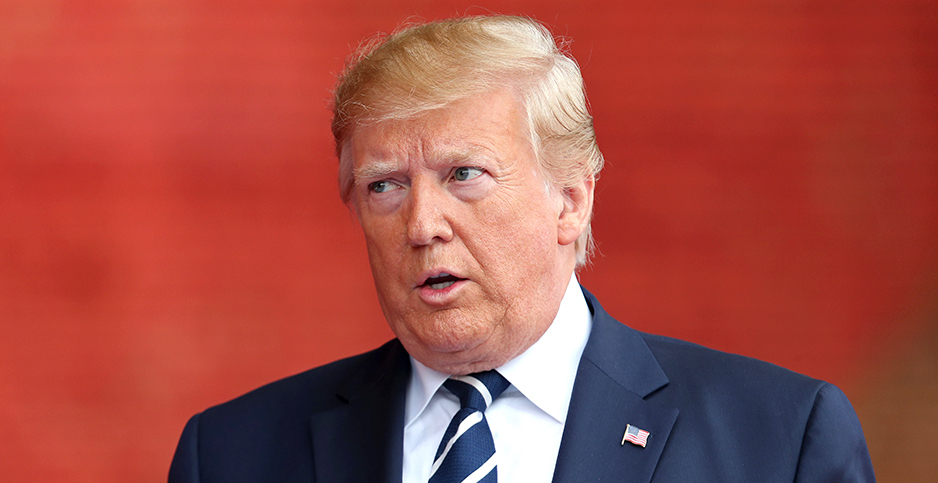 President Trump during his trip to the United Kingdom this week. Lawmakers on Capitol Hill are furious about possible tariffs on Mexico. Avalon.red/Newscom

The oil and gas industry and its congressional allies are growing increasingly concerned over President Trump’s threat to slap tariffs on Mexican imports as soon as Monday, fearing the collateral damage on an otherwise thriving sector.

Hill aides said yesterday they have been fielding calls from oil and gas companies all week seeking meetings to oppose new tariffs, while lobbyists are mounting a full-court press to tamp down the president’s latest trade brinkmanship.

Even though Republicans have been reluctant to confront Trump over tariffs, GOP senators told administration officials during Tuesday’s policy luncheon that they were confident they could override an expected veto should a resolution to block the new tariffs pass both chambers.

Senate Republicans this week have repeatedly sidestepped reporters’ questions about such a resolution, saying they were hoping that yesterday’s White House meeting with top Trump and Mexican officials would produce a deal to avoid the 5% tariffs on all imports from that country taking effect Monday.

Sen. John Hoeven (R-N.D.) echoed the sentiment yesterday. "First things first, we’re hoping they work something out with the Mexican government," he told E&E News. "They need to."

If a deal doesn’t materialize, Hoeven added, "well, then we’ll see from there. We want this negotiation to be successful."

Senate Energy and Natural Resources Chairwoman Lisa Murkowski (R-Alaska) signaled that GOP resolve to confront the president may be growing if there’s no retreat on tariffs, which also threaten the United States-Mexico-Canada Agreement.

"We had a pretty interesting discussion yesterday at lunch about the White House’s rationale," she told E&E News yesterday. "I think you’re going to have a lot more robust discussion internally about what legislative response might be appropriate."

Murkowski spoke about the effect of Trump’s trade policies in her own state, noting that the steel and aluminum tariffs have been estimated to raise the price of pipeline construction by as much as 25%.

"We’ve got another situation right now with a drill rig that is being built by one of the Native corporations for the purposes of work in the [National Petroleum Reserve-Alaska], and it’s caught right smack in the middle of all of this," Murkowski said yesterday.

"These are considerable investments, so how we’re able to kind of navigate this, it’s a real challenge right now," she said.

‘Anybody that will listen’

Senate Republican opposition to tariffs on imports from Mexico remains strong across the ideological spectrum.

"Tariffs are not the right way to go. There is no reason for millions of farmers, ranchers, manufacturers and small businesses in Texas to pay the price and face billions in additional taxes," said Sen. Ted Cruz (R-Texas), a conservative ally of the White House, who blamed the standoff on congressional Democrats blocking action on immigration.

Sen. Mitt Romney (R-Utah), an increasingly vocal critic of Trump foreign policy, said he expects a deal to avert the tariffs. He added, "No one wants to see tariffs, and I think the president knows that."

But Trump appears dead set on going ahead with the tariffs next week, despite public and private warnings from members of his own party.

"I’ve talked endlessly with the president, Mr. [Jared] Kushner, anybody that will listen," an exasperated Sen. John Cornyn (R-Texas) said yesterday, also blaming Democrats for what he said is a growing humanitarian crisis at the border. "They agree that it’s Congress’ responsibility to deal with this."

Trump found support for his tariff threats on the other side of the Capitol yesterday, where House Minority Leader Kevin McCarthy (R-Calif.) urged GOP lawmakers to remain united behind the president in his efforts to force Mexico to curb illegal immigration.

"We should all be supportive of the president so he can come to an agreement so [that] there won’t be any more tariffs," McCarthy told reporters yesterday.

While saying no one wants tariffs, McCarthy warned lawmakers against "undercutting" Trump’s negotiating tactics. "You don’t hear anyone in Mexico undercutting" the talks, he added.

McCarthy declined to speculate on how House Republicans would respond to blocking tariffs if the talks with Mexico falter.

He would need to avoid the loss of about five dozen GOP lawmakers to keep Democrats from passing veto-proof tariff legislation.

Last night the president tweeted, "Immigration discussions at the White House with representatives of Mexico have ended for the day. Progress is being made, but not nearly enough!"

The immediate impact of the tariffs may be felt at the pump, given that Mexico exports heavy crude oil to Gulf Coast refineries (Energywire, June 3).

Joshua Zive, a partner with Bracewell LLP, said the possibility of tariffs "injects a tremendous amount of uncertainty" into North American oil markets, where oil and gas have crossed the U.S., Mexican and Canadian borders for decades with little fanfare to the benefit of companies and consumers.

Compounding the fears is Trump’s threats to increase the tariffs by 5 percentage points each month unless Mexico takes steps to curb immigration. Without a deal by October, the tariffs will rise to 25%, where they’ll be capped.

"October will be here before we know it," said Zive.

Another question is whether Mexico will pursue retaliatory threats against U.S. oil and gas imports — a top concern of Sen. Bill Cassidy (R-La.).

"I’m not sure how much product we get out of Mexico, but if they decide to retaliate, that could have a significant impact," Cassidy said yesterday.

After years of pushing both the Energy Department and Federal Energy Regulatory Commission to expedite the export application process, "now you’ve got headwinds."

"So we’re moving them through and now we’ve got this up against us," Murkowski added.