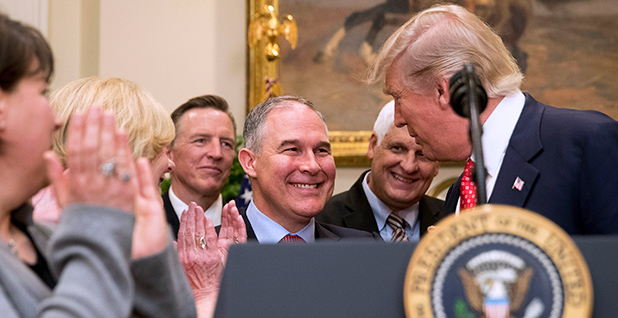 Some environmentalists popped the Champagne corks yesterday when they heard Scott Pruitt had resigned as head of EPA. But that doesn’t mean that industry lobbyists were weeping into their pinstriped sleeves.

Many, in fact, were quietly raising a glass to the ascension of Pruitt deputy Andrew Wheeler.

"Wheeler will be 100 times better," said one oil and gas insider. "Should be fun."

President Trump’s deregulatory agenda isn’t going away. And many think Wheeler, a former coal lobbyist, can execute it more effectively.

For the energy industry, there was a lot to love about Pruitt’s time at EPA. He took aim at Obama-era regulations and promised a lighter touch on enforcement.

But Pruitt brought heavy baggage to the job, which in turn put an uncomfortable national spotlight on the industry. Beyond the 13 investigations into his conduct, there was the question of whether Pruitt’s ambitions for statewide office in Oklahoma imbued him with a zeal that wasn’t always beneficial to the industries he was trying to help.

For example, on the Clean Power Plan, the Obama administration rule that set carbon dioxide limits for power plants, many businesses would like to see the administration replace the rule with less dramatic restrictions. But that wouldn’t play as well as simply "ripping it up," Book said. Book expects to see Wheeler support a new rule.

"How easy would it have been for Scott Pruitt to go back to Oklahoma after putting a climate rule on the books?" Book asked. "Ripping up a rule is a great way to win applause at a political rally. But it’s a really terrible way to plan your business."

Home-state politics were also seen as a possible factor in Pruitt’s handling of the renewable fuel standard, which earned Pruitt scorn from corn-state Republicans. Ethanol is unpopular in Oklahoma, where oil and gas is a dominant industry. Book expects a friendlier approach to ethanol and fewer small refiner exemptions from the RFS.

Wheeler isn’t known to have political ambitions. What he’s known for is a steady hand, an insider’s instincts and temperament for the long game. And he’s seen as having the same pro-industry inclinations as Pruitt.

For years, Wheeler was a top staffer for Sen. Jim Inhofe (R-Okla.), Pruitt’s mentor and the most vociferous opponent of climate regulation in Congress. Then he became a lobbyist, representing a broad spectrum of energy interests. One of his highest-profile clients was Murray Energy Corp., run by vocal Trump supporter Bob Murray.

Murray is an ardent critic of EPA and especially of the Obama administration. His company has sued the agency several times, including one suit to block the Clean Power Plan, which Pruitt was working to reverse.

But Wheeler’s more conventional approach will likely present fewer targets for the environmental groups that have made hay with Pruitt’s many scandals.