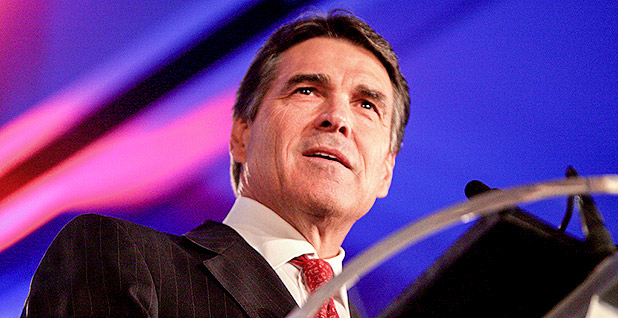 Former Gov. Rick Perry of Texas is tapping into a vast network of supporters and former staffers in Washington as he prepares for confirmation to lead the Department of Energy. Photo by Gage Skidmore, courtesy of Flickr.

Former Republican Gov. Rick Perry of Texas is tapping into a vast network of Washington insiders, former staffers and supporters from his presidential bids as he prepares for congressional vetting to lead the Energy Department.

According to sources, President-elect Donald Trump’s transition team has enlisted at least two veterans in the energy world to help Perry maneuver Congress, where he has already received a warm welcome from Republicans and skepticism from some on the left.

Perry’s confirmation hearing before the Senate Energy and Natural Resources Committee is slated to be held early next month (Greenwire, Dec. 14).

While Perry is known for railing against Washington institutions and big government, former advisers and supporters say his move through Capitol Hill will be smooth given his broad support network.

Matt Keelen, a Republican lobbyist who rallied D.C. support for Perry during his 2012 presidential run, said the former governor has strong backing from the Texas delegation and the Republican Governors Association.

"He’s got more friends and allies than you might think, but he’s not a huge fan of D.C.," Keelen said.

Brooke Rollins, head of the Texas Public Policy Foundation and Perry’s former deputy general counsel and policy director, said her organization is offering support as her former boss assembles his team with an eye on offering future policy advice. "Eventually, would we like to play a role on the policy side?" Rollins said. "Of course."

The foundation, a deeply influential voice in Texas, has called for the rollback of a slew of Obama administration climate policies and a pivot toward state autonomy (Energywire, Dec. 6).

Perry is already facing some pushback on the Senate panel from Democrats including Ed Markey of Massachusetts and Martin Heinrich of New Mexico. They have expressed concerns about Perry’s ties to fossil fuels and past stated intention to dismantle DOE, a move that would leave valuable federal jobs across their districts in jeopardy.

Keelen warned against boxing Perry in as solely a supporter of oil and gas, but acknowledged the former governor will look for ways to cut costs, streamline and allow the private sector to take center stage at DOE. Keelen didn’t rule out the nation’s 17 national laboratories being moved under the jurisdiction of the Department of Defense.

"It’s typical playbook, anybody in the Republican Party is an oil and gas guy, particularly from Texas," Keelen said. "But if you look at his record on renewables, he’s pretty far out in front of a lot of blue-state governors from what he did in Texas."