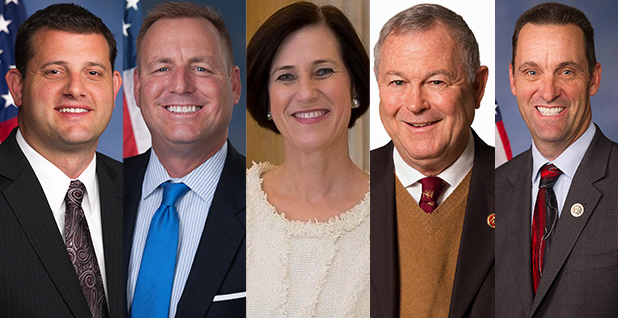 This story was updated at 1:10 p.m. EDT. Correction appended.

Republican incumbents in key California House seats targeted by Democrats this fall largely hold a financial edge over their challengers heading into the state’s primary next month. But that money advantage doesn’t mean they’ll keep their jobs.

The Democratic Congressional Campaign Committee has its sights on seven California districts that it views as vital to the party’s effort to flip control of the House in November.

The DCCC targeted these seats because Democratic presidential nominee Hillary Clinton carried them over now-President Trump and because California is a deep blue state.

Democrats hold 39 of the state’s 53 House seats, while Republicans have 14. The DCCC ambition equates to flipping half of those.

Seats targeted are those held by Reps. Jeff Denham in the 10th District, David Valadao in the 21st District, Steve Knight in the 25th District, Mimi Walters in the 45th District and Dana Rohrabacher in the 48th District.

Two other seats in play have open races. Republican Reps. Darrell Issa in the 49th District and Ed Royce in the 39th District have announced their retirement.

Flipping the seats could be tough, even with chatter about a "blue wave," said Darry Sragow, veteran political strategist and publisher of the "California Target Book," a nonpartisan political guide.

Five of the seven are ruby red districts. With the exception of Clinton in 2016, a Democrat has never triumphed in those since they were created after the 2010 census. That includes races for congressional seats, the state Legislature and statewide offices.

"When you look at how the people in those districts are voting, in five of them no Democrat has ever won except for Hillary Clinton," Sragow said. "That’s a very, very tall order for a Democrat to win that seat."

The two districts where Democrats have won since 2010 are Denham’s and Valadao’s, both in parts of the state’s Central Valley.

It’s tough to rank which seat is most at risk, analysts said, because the issues in play are local. In addition, this is not a typical year, they note. In multiple districts there are numerous well-funded candidates, particularly on the Democratic side.

"We just don’t know. We’ve never seen this before," said Tony Quinn, an analyst with the "Target Book." "This is all kind of new."

The June 5 election results will reveal how vulnerable the seats are come November, said Kevin Spillane, a Republican political consultant in California.

The state has open or "jungle" primaries, where the top two vote-getters in June advance to the general election regardless of political party.

All the incumbents are likely to finish first or second, Spillane said. But how well they do will say a lot.

California turnout for nonpresidential election-year primaries typically is low. It was 24 percent in 2014 and averages 34 percent.

Republicans typically show up, Sragow said, so Democrats need anti-Trump fervor to drive voters to the polls. Concerns about immigration crackdowns could push up the Latino vote, he said.

Energy interests are supporting some of the candidates. Valadao has received money from multiple oil and utility groups and political action committees.

He took $5,000 this quarter and $10,000 this cycle from the Chevron Employees PAC, and the same from the Valero PAC as well as the Koch Industries PAC. Koch has petroleum and chemical interests.

Walters, who represents a central Orange County district, received $5,000 this quarter and $10,000 this cycle from each of the Koch Industries PAC, PG&E Employees Energy PAC, Sempra Energy Employees PAC and Valero PAC.

Overall, environmental issues are less important to voters than other ones including immigration and the economy, Sragow said. If two Democrats advance to the November race, green issues could become more relevant, though often the Democrats agree on those policies.

In terms of the money, Denham, Valadao, Knight and Walters have an edge over their competitors for now. Each raised more than their Democratic challengers in the first three months of this year. Many also had more cash on hand.

That means they can fund advertisements and other methods of getting their name out, Sragow said.

"There’s a very strong correlation between how much money you have to spend on your campaign and the likelihood you’re going to win," Sragow said. "It’s very simple."

It’s not a promise of success, however, he and others were quick to point out.

"Money is important. It’s very important, but it’s not the only factor," Spillane said. "The political environment has a lot to do with it, the energy, who’s turning out to vote."

Every rule has an exception. Rohrabacher, unlike other incumbents, doesn’t have a financial advantage over his challengers.

Rohrabacher also has two GOP challengers, Scott Baugh and Stelian Onufrei. Each of them raised less than Rouda and three other Democratic candidates.

Polling shows Rohrabacher is weak, even though it’s a conservative district, Quinn said. That, combined with Baugh’s candidacy, raises the odds two Republicans could win the primary in that district, several analysts said.

If Rohrabacher and Baugh split the GOP vote fairly evenly and land in the top two spots, they would both advance to November’s election.

In 2016, Issa narrowly prevailed over his Democratic challenger, retired Marine Col. Doug Applegate, by 1,621 votes. His decision to retire opened the door to a flood of candidates. The Cook Political Report rates the district "lean Democratic."

Democratic candidate Paul Kerr, a businessman and Navy veteran, topped the recent fundraising ending in March with almost $2 million. He’s given himself campaign money: $900,000 in the first quarter of this year and $1.6 million total this election cycle.

He’s also received help from several relatives. He’s accepted the maximum allowable $5,400 this cycle each from eight people with his last name, located in California and Florida.

Sara Jacobs, who worked for President Obama’s State Department, came in second with $1.7 million. She is granddaughter to Irwin Jacobs, co-founder and former chairman of Qualcomm Inc., a telecommunications company.

Sara Jacobs had donations from many people outside California, including residents of more than a dozen states and Washington, D.C.

Candidate Mike Levin, who finished third in money with $1.6 million, is an environmental attorney who’s launched clean energy startups and lists accelerating sustainable energy and environmental protection at the top of his priorities list. His ballot description is "Clean Energy Advocate."

Applegate trailed the pack financially. He has higher name recognition, however, after running previously, analysts said.

The Issa seat is another one where analysts say there’s a risk two Republicans could win the open primary, if the high number of Democratic candidates splits Democratic and liberal-leaning votes (E&E Daily, March 1).

The possibility is higher with the Rohrabacher seat, however, because the incumbent still is in the race and GOP rival Baugh is well-known.

Republican Young Kim followed behind in money. She worked for Royce as his director of community operations.

Sam Jammal, described on the ballot as a "Clean Energy Businessman," raised $433,000 in the first quarter, an amount below the top four candidates financially in the race. He’s supported by Climate Hawks Vote, a super PAC, which noted that he’s the only candidate in the race with a clean technology and climate angle.

That many candidates makes it unclear what June could bring, analysts said.

"What that says is both the Democratic and Republican votes can get sliced into relatively even pieces," Sragow said. In terms of the potential primary winners, he said, "it’s impossible to say."

The 25th District is located northeast of Los Angeles and is one of the tightest races in terms of money. In the first quarter of 2018 Knight took in $1.3 million, while Democratic competitor Katie Hill raised $1.1 million. Another Democrat, lawyer Bryan Caforio, raised close to $1 million.

Caforio on his campaign site said that fighting warming is one of his priorities. He’s pledged not to take contributions from oil and gas companies and is "committed to investing in clean energy as we move to 100 [percent] renewable energy."

Denham’s first-quarter haul totaled $2.7 million. He has several Democratic opponents, but only one had recent fundraising exceeding $1 million: Josh Harder, who took in $1.3 million.

Correction: Denham and Valadao’s districts are both in parts of the state’s Central Valley.