Energy looks for an opening as health care fight drags on 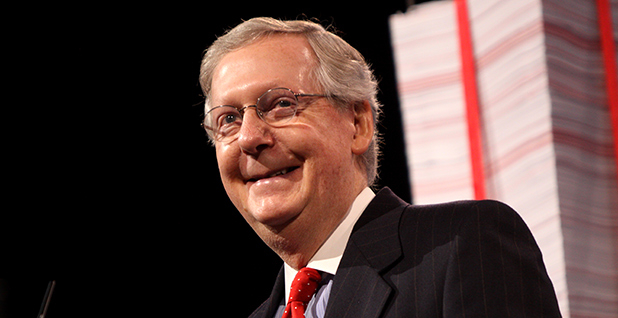 Senate leaders are still hoping to mount a last-ditch effort to repeal the Affordable Care Act, a push that would fulfill years of GOP campaign pledges but one that also diverts attention from pending energy and environment nominees, appropriations and a broad rewrite of the tax code that is supposed to be the centerpiece of the fall congressional agenda.

This week will be déjà vu for Senate Energy and Natural Resources Chairwoman Lisa Murkowski (R-Alaska), who once again faces enormous pressure to back the new bill. Under the arcane budget process known as reconciliation, the Senate has until Sept. 30 to pass the bill by a simple majority.

Murkowski in July joined Sens. Susan Collins of Maine and John McCain of Arizona to sink the last repeal push. And McCain’s Friday announcement that he would not vote for the measure was a blow to the latest effort.

On CNN yesterday, Collins called it "very difficult for me to envision a scenario where I would end up voting for this bill." Sen. Ted Cruz (R-Texas) further complicated the math on health care by announcing yesterday that will he will not support the bill in its current form.

President Trump in July took to Twitter to pressure Murkowski into voting for that bill, while also lobbying her by phone in what she described at the time as "not a very pleasant call" (Greenwire, July 27).

But Murkowski’s relationship with the administration appears less strained than it was in July. Trump invited her to lunch recently, although she was unable to attend because she was attending to Alaska-related business.

On Saturday, Trump took a softer tone in pressuring Murkowski. "Alaska had a 200% plus increase in premiums under ObamaCare, worst in the country. Deductibles high, people angry! Lisa M comes through," he said on Twitter.

Murkowski hasbeen noncommittal on Graham-Cassidy, saying last week she’s studying the bill’s effects on her state, which has some of the highest health care costs in the nation and has seen them rise under the ACA.

The chairwoman also faced pressure in July from Interior Secretary Ryan Zinke when he allegedly said her vote on health care could affect the administration’s resource policies in her state.

She told E&E News last week that she and Zinke "are in a good place." Murkowski said, "We’ve got a lot to work on."

Murkowski dismissed any connection between the upcoming health care vote and the recent leak of an Interior document that showed the administration is considering allowing seismic testing for oil and gas within the Arctic National Wildlife Refuge.

That move, which would move a longtime goal of the Alaska delegation closer to fruition, was made on the merits, not because of political considerations, she said.

Waiting in the wings

Given McCain’s opposition, McConnell’s next moves on health care are unclear. There’s a number of energy and environment nominees awaiting confirmation that could occupy some of the Senate’s floor time.

These include five nominees that cleared the Energy and Natural Resources Committee last week, including Richard Glick and Kevin McIntyre to join the Federal Energy Regulatory Commission, David Jonas to be general counsel at the Department of Energy, Ryan Nelson to be solicitor of the Department of the Interior and Joseph Balash to be assistant secretary of the Interior for land and minerals management.

Also waiting is the Senate’s bipartisan energy bill, S. 1460, which stalled in conference talks with the House last year. McConnell this summer bypassed the committee process and placed a revised version on the Senate calendar, which would allow him to bring it up at any time.

While tax reform is supposed to be the fall’s marquee priority, neither chamber has yet to pass a budget resolution, which is necessary for passing the overhaul through the Senate by a simple majority.

House Republicans have yet to bring their budget to the floor, as they hunt for votes among the internal factions of their caucus. Deliberations in the Senate Budget Committee on its own resolution continue.

ANWR could make an appearance in that debate as well. Should the committee include reconciliation instructions for the Energy and Natural Resources panel, it could produce legislation that would allow drilling within the reserve to be folded into the tax reform package (E&E Daily, May 24).

However, adding a contentious unrelated issue could further complicate the tax push by alienating Republicans such as Collins and McCain, both of whom voted against opening the reserve in 2005.

While Senate appropriators have marked up several of the annual spending bills, there are no markups scheduled for this week. Sen. Tom Udall (D-N.M.), the top Democrat on the Interior-Environment Appropriations Subcommittee, said last week that he still anticipates a vote on that measure within weeks.

While the Senate Finance Committee has already launched hearings on tax reform, its only event scheduled for this week is this afternoon’s hearing on the Graham-Cassidy health care proposal.

But while President Trump and Senate GOP leaders have targeted three moderate Democrats up for re-election to join them in writing tax reform, the top Democrat on the Finance Committee said last week that he’s heard nothing from the administration for bipartisan help.

Sen. Joe Donnelly (D-Ind.), who is a top GOP target for help on taxes along with Sens. Joe Manchin of West Virginia and Heidi Heitkamp of North Dakota, appeared Friday with Vice President Mike Pence in Indiana at a tax-themed event.

Asked about the White Houseis courting of the trio, Wyden said "there’s been extraordinary unity among Senate Democrats."

"Those senators I talk to all the time about various issues, and they made it clear that they agree with the vast majority of the key principles that have been laid out," he said. "These are smart, tough senators and they’re dealing with their states and looking at the various issues."