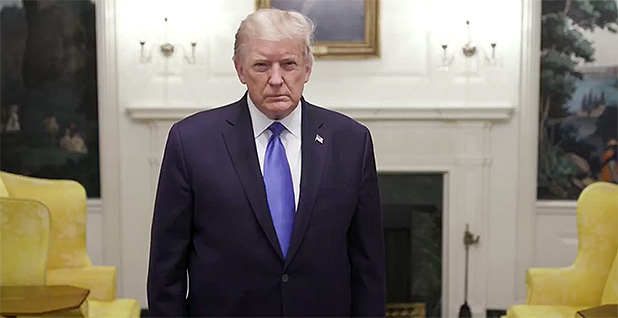 President Trump’s case of the coronavirus shook up financial markets, including the oil industry, but even his hospitalization is unlikely to cause a significant stir if Trump continues to recover.

The White House, which offered conflicting reports of Trump’s condition over the weekend, sought yesterday to present Trump as focused on work while battling his illness at Walter Reed National Military Medical Center in Maryland.

His physician told reporters at a briefing yesterday that Trump could leave the hospital as soon as today.

Trump "wants to get back home to the White House and get back to work," national security adviser Robert O’Brien told CBS’s "Face the Nation."

And observers said they expected no "material impact" on the energy sector as long as Trump returns to good health.

"As with national security and other areas of policymaking, I think energy policy and environmental policy will proceed on pace despite the president’s COVID diagnosis," said Bob McNally, a former energy adviser to George W. Bush and founder of oil consultancy Rapidan Energy Group.

O’Brien said he planned to give Trump a national security briefing via videoconference yesterday from the White House.

"We have a government that is steady and is steady at the tiller," he said.

The effect on oil was outsize, but oil prices were already being pushed down by other events, including COVID-19-related lockdowns in foreign countries and increases in Middle Eastern oil production, said Andy Lipow, president of Lipow Oil Associates LLC in Houston.

Trump’s diagnosis "shows no one is immune to catching the virus," Lipow wrote in an email.

The oil field services industry, which makes up the bulk of oil and gas employment, lost 106,000 jobs between February and August, which was about 14% of its workforce, according to the Petroleum Equipment & Services Association.

The industry regained about 1,400 jobs in September, but its future is murky.

"While the worst of the cutbacks appear to be behind the industry, the outlook remains uncertain because a resurgence in COVID-19 cases could suppress demand and derail economic recovery," the association said in a report.

While Trump’s COVID-19 diagnosis may not affect day-to-day business, it could play a significant role in an election McNally called "the most important election for energy policy in modern times, if not in all U.S. history."

Trump, who has rolled back environmental regulations, has pledged to pursue an "energy dominance" agenda that includes use of fossil fuels. Biden has pledged to address climate change with a $2 trillion investment that would favor clean energy.

The Biden campaign took down negative ads in response to Trump’s diagnosis and hospitalization, but Biden is campaigning in swing states, including attending a town hall tonight in Miami hosted by NBC News.

The diagnosis also is not expected to affect Wednesday’s debate between Vice President Mike Pence, who tested negative for the virus over the weekend, and Democratic vice presidential candidate Sen. Kamala Harris (D-Calif.).

Energy could play a role in the debate: Trump has repeatedly claimed that Biden would ban hydraulic fracturing and ruin the economy in energy-rich states like Pennsylvania — whose 20 electoral college votes make it the most valuable prize of three Rust Belt states that proved critical to Trump’s 2016 win.

Biden has stopped short of calling for a ban on fracking but said he would bar the practice on public land.

Trump seized on the issue as soon as Biden named his running mate, telling reporters in August that Harris opposes fracking and "petroleum products."

Harris told a CNN town hall in September 2019 that there was "no question" that she favored banning fracking, though her presidential campaign’s climate change plan released that month did not call for a ban.

And she told CNN’s "State of the Union" last month that she would support Biden’s more centrist policy, saying that hydraulic fracturing provides "good-paying jobs in places like Pennsylvania."

The campaigns have already spent more money in Pennsylvania than any other state, and Trump’s campaign on Thursday released a new 30-second spot that accuses Biden of looking to "end fracking." The ad will air on TV stations in western Pennsylvania.

Polls in the state have shown Biden with a narrow lead over Trump. A CBS poll released yesterday found Biden leading Trump by 7 percentage points, 51% to 44%. The poll was conducted before the news emerged that Trump had tested positive for COVID-19.