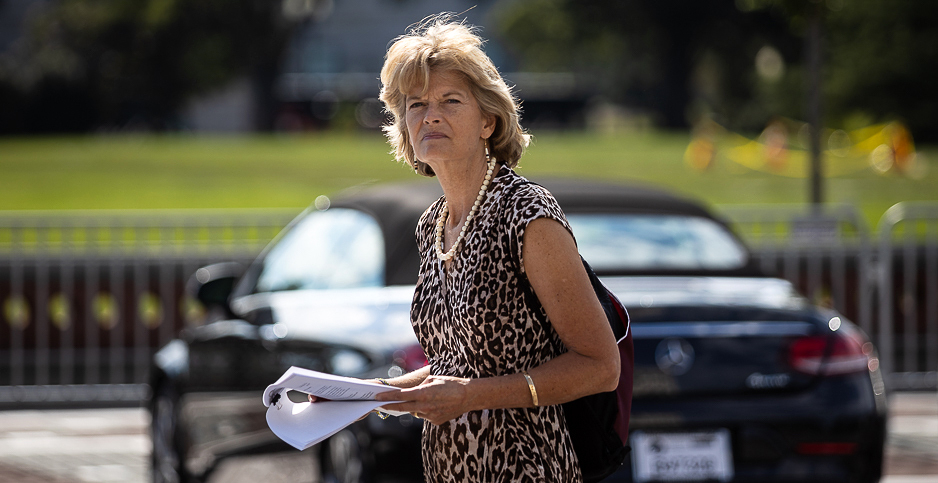 With talks on another phase of pandemic relief at a standstill, both the House and Senate are maneuvering to take energy legislation to the floor in the coming weeks.

In the Senate, Energy and Natural Resources Chairwoman Lisa Murkowski (R-Alaska) is working to secure time for her bipartisan energy package, S. 2657, after a deal last week on an amendment to curb heat-trapping hydrofluorocarbons. A dispute over HFCs sidetracked the energy reform legislation earlier this year (E&E Daily, Sept. 11).

In a statement last week, Murkowski said she was trying to revive the innovation-focused bill "as soon as possible," adding that doing so "will require cooperation and good faith from members and stakeholders alike."

The timing of a possible Senate energy debate remains unclear, but Murkowski told E&E News in July that if the HFCs spat got sorted out, she could complete work on the underlying energy package in as little as a day or two.

One lobbyist said last week that one option under consideration is trying to secure an agreement to allow votes on two amendments.

The first would be on the HFCs deal announced by Senate Environment and Public Works Chairman John Barrasso (R-Wyo.), ranking member Tom Carper (D-Del.) and Sen. John Kennedy (R-La.), the original sponsor of legislation to give EPA authority to regulate the "super-polluting" greenhouse gases.

The second amendment would restore voluntary building codes to the efficiency title of the bill. Those were stripped out in a nod to a long-running dispute with homebuilders.

The spat has dogged efforts to advance a broader efficiency proposal sponsored by Sens. Rob Portman (R-Ohio) and Jeanne Shaheen (D-N.H.), which is part of the Murkowski package (E&E Daily, Feb. 26).

The Senate was poised to vote on building codes language in March before the HFC issue sidelined the entire discussion (E&E Daily, March 6).

"It is also one of the most consequential legislative initiatives for modernizing our nation’s energy policies in more than a decade," wrote the groups, which include the U.S. Chamber of Commerce, American Petroleum Institute and Edison Electric Institute.

In a surprise move, the House will also take up a yet-to-be revealed energy package this month, a move that could allow for bicameral negotiations before the end of the year.

While the bill has not yet been released, Majority Leader Steny Hoyer (D-Md.) said the measure will be focused on energy innovation and clean energy deployment (Greenwire, Aug. 31).

The Carbon Capture Coalition indicated last week that the measure will include provisions from several House bills that aim to boost carbon capture and sequestration technology.

More details on the push are likely to emerge Wednesday, when the House Energy and Commerce Subcommittee on Environment and Climate Change holds a hearing titled "Building a 100 Percent Clean Economy: Opportunities for an Equitable, Low-Carbon Recovery."

Republicans said the push appears to be dead for the immediate future, with Senate Majority Leader Mitch McConnell (R-Ky.) on Friday striking a pessimistic tone in remarks at a Kentucky hospital the day after the vote.

"I wish I could tell you we were going to get another package, but it doesn’t look that good right now," McConnell said, according to The Washington Post.

The relief push may also become an issue in negotiations on a stopgap spending measure, known as a continuing resolution (CR), which must be passed by the Sept. 30 end of the fiscal year to prevent a government shutdown.

However, House Speaker Nancy Pelosi (D-Calif.) has said she will not allow relief talks to become intertwined with the CR negotiations — a position supported by the Trump administration in order to avoid an election-year government shutdown in the middle of a public health crisis.

Pelosi and Treasury Secretary Steven Mnuchin have agreed to a "clean" CR, but the duration remains unclear.

McConnell last week said the stopgap should last until December, which would allow a lame-duck Congress time to close out the session with a possible omnibus spending package.

However, Democrats are also reportedly considering a CR lasting into February, which would allow a President Joe Biden leverage to shape federal spending early on in his administration should the Democratic nominee prevail in November.