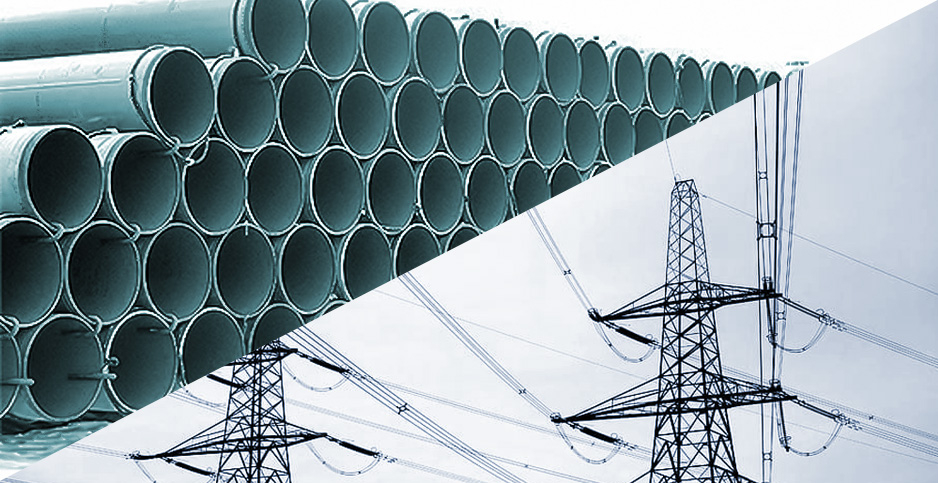 The Army Corps of Engineers has suspended a water permitting program that could have far-reaching ramifications for developers of transmission and oil and gas pipelines. Pixabay(pipelines);WallpaperFlare(powerlines)

The Trump administration has halted national wetland permits for new oil and gas pipelines and power lines in a move that could tie up construction for months for industries already struggling in the coronavirus pandemic.

The Army Corps of Engineers earlier this month suspended its Nationwide Permit 12 program with little fanfare after a federal court in Montana vacated a related permit for the Keystone XL pipeline.

The move grinds to a halt approval of general permits under the national program, which fast-tracks permitting of projects that cross streams and wetlands that affect up to a half-acre of protected federal waters.

Project developers still coping with the impacts of COVID-19 say the permitting snafu will add delays and increase costs.

"All of my members use this permit," said Emily Sanford Fisher, general counsel for the Edison Electric Institute, whose members include investor-owned utilities that provide electricity for more than 70% of all U.S. customers. "It’s not a good story."

The Army Corps halted the permitting program in light of a legal fight playing out over the KXL pipeline — and it’s not clear when the freeze will be lifted.

In emails obtained by E&E News, Jennifer Moyer, chief of the Army Corps’ regulatory program, instructed district offices on April 17 not to verify any pending pre-construction notifications for such permits "out of an abundance of caution" following the U.S. District Court for the District of Montana’s decision to withdraw a Clean Water Act permit for KXL. The emails were first reported by the Associated Press.

Chief Judge Brian Morris, an Obama appointee, sided in the case with environmental groups’ complaints that the Army Corps had failed to conduct a multiagency consultation required under the Endangered Species Act to assess the risks of the Nationwide Permit 12 program ahead of its five-year renewal back in 2017 (Energywire, April 22).

Brandon Mobley, the regulatory division chief of the Army Corps’ Fort Worth District and the recipient of Moyer’s email, confirmed in an interview that the program is suspended and said the Department of Justice is handling the matter. "As of this point, we have no Nationwide Permit 12 for our utilization," said Mobley. DOJ declined to comment.

Fisher said developers of pipelines or power lines can still apply for individual permits to cross streams or wetlands, thereby going around the Nationwide Permit 12 program. But she quickly noted that such an approach would inevitably run up against the delay or cancellation of public hearings due to the pandemic.

"It will certainly add to the time and expense," she said. "So it doesn’t halt infrastructure development in the U.S.; it’s just going to slow it down."

Christi Tezak, managing director of research at ClearView Energy Partners LLC, in a note to clients said Morris’ ruling vacated and remanded the reauthorization of the Nationwide Permit 12 program, which was one of the last rulemakings finalized under the Obama administration.

The Army Corps or TC Energy Corp., formerly TransCanada Corp., which is developing KXL, may appeal Morris’ decision to the 9th U.S. Circuit Court of Appeals, Tezak added. But she noted that because the court’s caseload tends to be "very heavy," it could take time for an appeal to be heard, and construction along KXL’s path could be halted for up to a year.

Tezak in an interview said other projects under construction that rely on Nationwide Permit 12 approvals now face a risk to their schedule, as they may not be able to conduct unfinished work related to water crossings.

"Similarly, projects waiting for authorization face a delay in receiving permits for similar work for an indefinite period of time," Tezak said.

The nationwide permits at the heart of the KXL fight have long been a source of contention — and legal brawls.

When controversy erupted over the approval of the Dakota Access pipeline four years ago, critics like the National Wildlife Federation argued that the blanket permits — unlike individual permits — are contrary to the Clean Water Act.

The review process, the group said, takes into account individual impacts but not the cumulative effects of construction on wetlands, streams and other water bodies protected by law (Greenwire, Nov. 3, 2016).

Larry Liebesman, a senior adviser at the firm Dawson & Associates and a former senior trial attorney in DOJ’s environment division, said the Army Corps has been issuing the permit since the 1970s to authorize activities under Section 404 of the Clean Water Act that result in only minimal individual and cumulative adverse environmental effects.

The permits, which must be reauthorized every five years or less, allow developers to dig near rivers, streams, wetlands and other water bodies in compliance with the Clean Water Act and the Rivers and Harbors Act.

Unlike individual permits that require a deep analysis and coordination with other agencies, the nationwide permit program is structured to be faster, said Liebesman.

"The Nationwide 12 is out there, and if you meet the criteria … and the impacts are minimal, typically you can qualify by issuing a notice of intent," he said. "And if you do that, you can move through things pretty quickly."

In the case of KXL, legal issues arose because the Army Corps chose not to conduct a programmatic Endangered Species Act consultation for any of the nationwide permits issued when the program was reauthorized in 2017. The current nationwide permit expires in 2022.

Army Corps spokesman Doug Garman told the Associated Press last week that the blanket permit has been used more than 37,000 times since it was renewed in 2017.

Oil and gas pipeline developers are now warning that the Army Corps’ decision will force companies to pursue individual permits that require full environmental impact statements and overwhelm the agency.

John Stoody, vice president of government and public relations with the Association of Oil Pipe Lines, said Congress originally created the nationwide program because the Army Corps was being inundated by environmental reviews, and freezing the program now will trigger a wave of requests.

Ed Hirs, a natural resources fellow at BDO USA LLP and an energy fellow at the University of Houston, said he was "surprised" to see that the permit had been used so many times in the last three years. That’s almost 50 times per workday, he said.

Hirs agreed that suspending the program and forcing project developers to pursue federal approvals for each water crossing threatens to overwhelm the Army Corps.

The court decision, he added, could be "a huge impediment" for oil and gas pipeline projects and other affected developments.

It "could create a multi-hundred-billion-dollar industry overnight in doing these studies," he said.