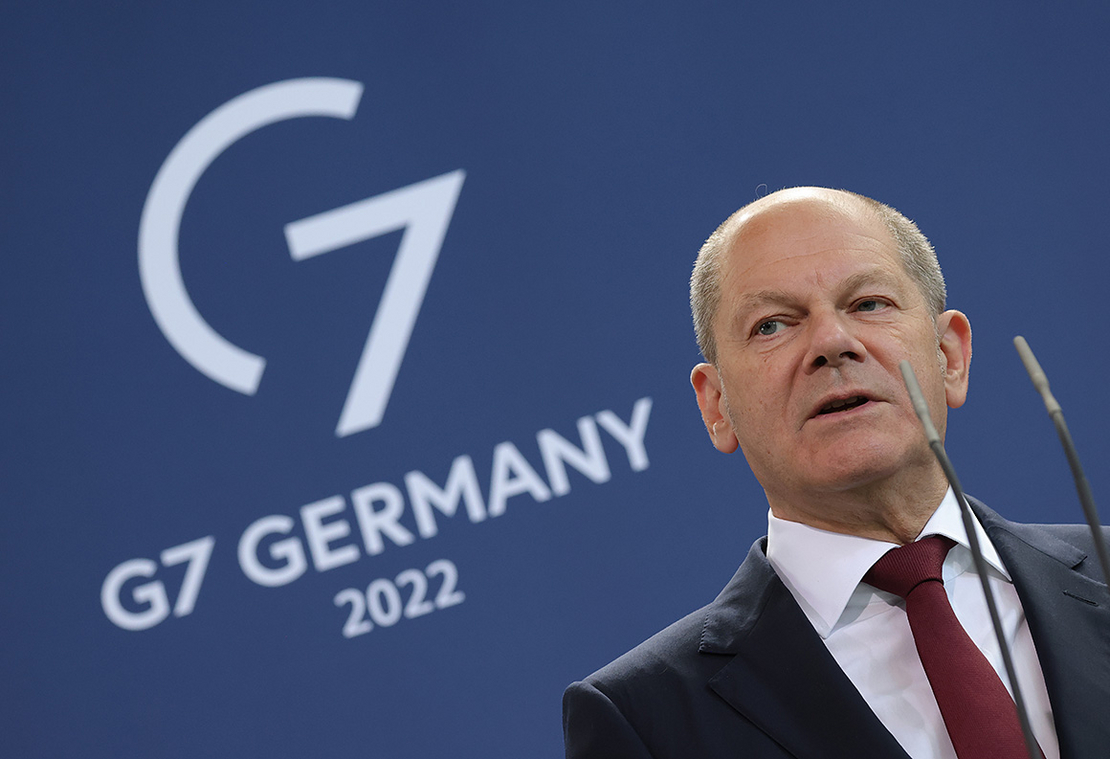 Leaders of many of the world’s most powerful economies plan to gather Sunday in Germany, where Chancellor Olaf Scholz and his government are grappling with a gas supply crisis that’s raising alarm bells.

The volatile energy situation in Germany and elsewhere is expected to take center stage at the Group of Seven talks — overshadowing plans to address climate change and potentially driving leaders to backtrack on commitments to end international fossil fuel investments this year.

It’s a sharp turn from when G-7 leaders met a year ago in Cornwall, England. And it’s yet another example of how Russia’s invasion of Ukraine has scrambled the geopolitics of climate and energy.

With Europe — Germany in particular — having to urgently replace the Russian gas that they had relied upon for so long, “there’s a risk that Europe doesn’t defend that position that the G-7 need to show leadership and not invest in fossil fuels anywhere,” said Alex Scott, program lead for climate diplomacy and geopolitics at E3G, a think tank.

So far, the signs are not looking good.

Reduced gas flows from Russia have triggered a return to coal in Germany, Europe’s industrial powerhouse. Germany yesterday raised its emergency gas plan to alarm stage, a signal to households and industries of a supply shortage. In addition, Germany is looking to expand where it gets its natural gas — with Scholz traveling last month to Senegal to discuss support for gas projects. That raises concerns that countries are investing in infrastructure that could lock in future warming by extending fossil fuel use well beyond the timeline that is safe for the planet.

A senior official from President Joe Biden’s administration, speaking this week to reporters, said energy is expected to be “at the heart” of discussions among G-7 leaders as they look for ways to stabilize global energy markets.

That doesn’t mean climate change is off the agenda. Several G-7 leaders have made a point of insisting they haven’t forgotten about global warming, said Jonathan Elkind, a senior fellow at Columbia University’s Center on Global Energy Policy and former assistant secretary for international affairs at the Department of Energy.

But “in the near term, dealing with Russia’s aggression has to be job one,” Elkind said.

For his part, Scholz — who took on the role of chancellor in December — is expected to tout an idea he campaigned on: a climate club of like-minded nations.

The original idea hinges on common climate policies and carbon pricing, but it is unlikely to find backers in Japan and the United States. During an address to Germany’s parliament earlier this week, Scholz described it as “an international market with comparable standards,” and he said he hoped to use a series of global summits to advocate for more climate protection.

A future for coal?

Climate advocates will be watching whether earlier statements from groups of G-7 ministers stick.

Last month energy and environment ministers committed to predominantly zeroing out emissions from their electricity systems by 2035 and achieving “highly decarbonized” transport sectors by 2030.

But they still haven’t put an end date to coal use at home. They also revamped a commitment issued at climate talks last year to end new overseas investment in fossil fuels by the end of 2022, “except in limited circumstances” — stirring concerns among greens that such language could create a loophole to allow for continued investments in polluting energies.

“We’re watching for how the leaders pick up that thread, what they say about renewable energy and how that is the solution to the energy price crisis and supply crisis, and that any gas investments that they make can only ever be short-term investments,” said Scott from E3G.

In addition to being economic heavyweights, the G-7 countries — Canada, France, Germany, Italy, Japan, the United Kingdom, the United States plus the European Union — are among the world’s largest historical emitters. How they approach their climate objectives can help drive the pace and ambition of climate action elsewhere.

If elements of the energy and environment ministers’ agreement make it into the final leaders’ statement, it could lock in what’s happening on the national level, said Sascha Müller-Kraenner, head of German environmental agency Deutsche Umwelthilfe.

“As soon as you have a kind of coordinated commitment within the G-7, it makes it more difficult for G-7 countries to backtrack,” he added.

But if it leads to more investments in long-term fossil fuel use, it could derail efforts to keep global temperatures from rising to dangerous levels, campaigners say.

The G-7 nations won’t be the only ones tracking what happens over the next few days in Germany. Developing countries will be watching what the G-7 says on climate finance — particularly after debates over payments for irreparable climate harms were shut down at a climate conference last week in Bonn, Germany (Climatewire, June 21).

One important gesture would be acknowledging a failure to meet a commitment two years past due to deliver $100 billion annually to help developing countries avoid and adapt to the impacts of climate change, said Joe Thwaites, an international climate finance advocate at the Natural Resources Defense Council.

G-7 leaders will need to provide some indication of what they’re doing to double finance for adaptation by 2025, he added.

As G-7 president, Germany also has invited Argentina, India, Indonesia, Senegal and South Africa to participate in select sessions at the three-day summit in the Bavarian Alps.

Those talks likely will hinge on the development of energy partnerships aimed at transitioning their emerging economies away from coal. Several G-7 leaders sealed an $8.5 billion deal at last year’s climate talks to help South Africa decarbonize its coal-dependent energy system. The effort is viewed as a model for similar projects in other countries.

What’s not clear is how commitments made in Germany would carry forward after the summit. Biden’s climate agenda has stalled in Congress, and an ambitious budget request to support international climate finance to the tune of $11 billion is unlikely to get approval. Japan and France also are dealing with energy security challenges. The leaders in France and the United Kingdom are also embattled politically, and energy-poor Japan is grappling with its own energy insecurities.

Susanne Dröge, a senior fellow at the German Institute for International and Security Affairs, said Germany’s decision to ramp up coal use and scale back its emphasis on the climate fight puts the G-7 in a difficult spot.

“The overall picture is that the G-7 cannot play the part it usually plays in preparing for climate negotiations and international cooperation on climate,” she said. “Basically, it’s a backslide.”