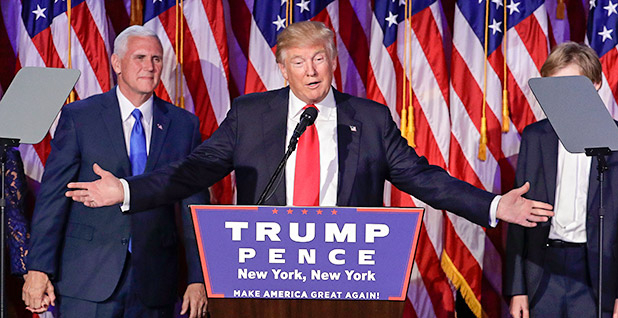 Donald Trump’s election is sending shock waves through the energy and environmental world.

The Republican’s victory surprised even his supporters after polls showed him steadily trailing, and the win shocked Democrats, environmentalists and others on the left who thought Hillary Clinton had the presidential race clinched. When he takes office, he’ll be backed by two Republican-held chambers of Congress and could appoint one or more members of the Supreme Court, leaving him poised to dramatically reshape energy and environmental policy.

"This race was never as sure as I think folks had predicted," said Erich Pica, president of Friends of the Earth. "It’s somewhat unfathomable to contemplate if Trump wins when it comes to climate change and what we have to do. We can’t afford another four years of delay and four years of attacking the science and four years of ignoring an issue of such consequence."

Pica said environmentalists will take a page from their defensive playbook during the George W. Bush administration and the Reagan administration. "We rally the American people to fight against Trump’s — what we would presume is an anti-environmental agenda," he said.

Dan Weiss, a longtime environmental advocate, said in an interview in 2015 that greens were watching Trump’s rise with "a mix of amusement and horror."

But as the election results came in last night, Weiss’ amusement had subsided. "Donald Trump would be a nightmare for anyone who breathes air, drinks water or wants to have a livable climate," Weiss said last night in an interview.

"This election showed that the American people are tired of their interests taking a back seat to special interests in Washington," he said. "President-elect Trump’s victory presents an opportunity [to] reset the harmful energy policies of the last generation. He has laid out an energy plan that puts the needs of American families and workers first."

Because the business mogul doesn’t have a lengthy political record on energy, "we have to look at some of the things he said during the course of the campaign and some of the people who have been advisers to him," said Scott Segal, an energy lobbyist at Bracewell LLP.

Much of that campaign rhetoric has been welcome news for the energy industry and critics of the Obama administration’s regulations.

George David Banks, a Trump supporter who was White House climate adviser during the George W. Bush administration, said, "You’re not going to have some energy sources that are politically correct and others that are not. Trump is going to be pro-energy across the board."

Hamm is seen as a possible choice to lead the Department of Energy. Some Republicans, however, have pushed for lawmakers who are familiar with DOE’s inner workings. The Trump team could also look for a business executive to become Interior secretary.

Banks said he thinks Trump will look to "reform how the EPA works and functions." Given that politically, "it would probably be very difficult to eliminate the EPA," Banks said, Trump’s comments may be a "starting point in a negotiation" to reform the agency.

Banks is also expecting the Trump administration to aim to roll back some of the Obama administration’s key climate change policies, including the Clean Power Plan to clamp down on power plants’ carbon dioxide emissions.

"I wouldn’t expect the Trump administration to defend the Clean Power Plan in court," Banks said. "I would expect the Trump administration to work on reversing the endangerment finding," he added, referring to the Obama EPA’s determination that greenhouse gases endanger public health and welfare. That finding paved the way for Clean Air Act rules to crack down on greenhouse gas emissions.

Trump has also said he would like to cancel the Paris climate change agreement. "That’s probably a Day One agenda item," Banks said.

"We’re going to cancel the Paris climate agreement and stop — unbelievable — and stop all payments of the United States tax dollars to U.N. global warming programs," Trump said in May (ClimateWire, May 27).

Importantly, Trump could appoint at least one Supreme Court justice if Senate Republicans refuse to confirm Obama’s nominee during the lame-duck Congress. That would solidify a 5-4 conservative majority, which would likely affect the fate of the Clean Power Plan and could tip the scales of the court for years.

Trump has released 21 names of conservative judges and has pledged to pick one of them for his Supreme Court nominee. Those lists enraged environmentalists and others on the left, who fear that another conservative justice on the court — or possibly more if more vacancies arise during Trump’s term — could roll back agencies’ authority and hinder environmental protections (Greenwire, Sept. 23).

"It’s time for every American who cares about a livable world — Republican and Democrat alike — to stand and defend our environment and health. If Donald Trump thinks he can launch a big polluter assault on our air, waters, wildlife and lands, we’ll build a wall of opposition to stop him. Whatever else we may have voted for on Tuesday, we haven’t turned away from generations of common sense environmental safeguards. We’re not about to turn away now."

Join us live on Facebook today at 1 p.m. EST for E&E News reporters’ postmortem on what election 2016 means for energy and environment issues.