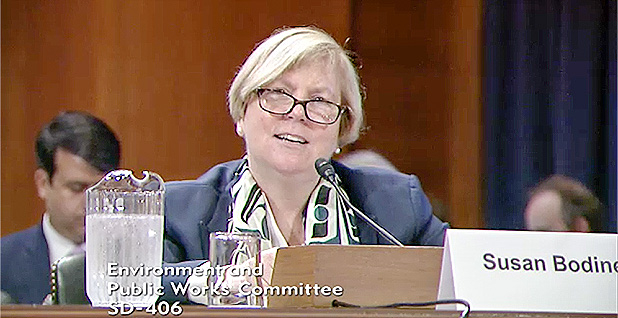 President Trump’s pick to lead U.S. EPA’s enforcement office is promising to avoid politics and enforce the law if confirmed to the job.

In written questions, committee Democrats pressed Bodine on whether she would steer clear of political influence as head of EPA enforcement. Ranking member Tom Carper (D-Del.) asked if she agreed to shield the office from politics, given Administrator Scott Pruitt’s ties to fossil fuel companies like Devon Energy Corp., as well as Trump properties having been subject to EPA enforcement actions.

She also said in another response that she has "a deep respect" for EPA career staff, given her prior service as head of EPA’s solid waste office during the George W. Bush administration. Bodine said she would employ "the same management style" and seek input from and listen to career staff.

Bodine was also quizzed about Trump’s proposed budget cuts for the EPA enforcement office — reducing its funds by almost 24 percent, down to $419 million in fiscal 2018 — resulting in 757 full-time employees being fired from the Office of Enforcement and Compliance Assurance (OECA), according to Carper.

She responded that the president’s budget includes $12 million for voluntary early retirement and that 20 percent of the agency’s workforce is at or over retirement age. In addition, Bodine said she understands that EPA expects to see "significant reductions" in the number of employees from buyouts, retirements and the continuing hiring freeze.

In addition, she said she wasn’t aware of plans to close any of the agency’s regional offices.

Bodine also took the chance in her written responses to tout her work on EPW. She said she helped draft amendments to the Senate energy bill in response to the drinking water crisis in Flint, Mich., as well as made sure to include provisions in the Senate’s Water Resources Development Act to reduce lead contamination.

Further, Bodine dismissed concerns that budget cuts sought by the Trump administration would hamstring efforts to clean up the country’s most polluted sites.

"If I am confirmed, OECA will continue to pursue and enter into settlements with parties responsible for cleanup action," she said. Bodine added that the cleanup program’s trust fund has more than $3.6 billion on the books "as a result of successful OECA enforcement actions."

Carper noted that before coming to EPW, Bodine was a lobbyist with Barnes & Thornburg LLP, where she represented Saint-Gobain Containers Inc. In 2010, Saint-Gobain agreed to pay a $2.25 million civil penalty to settle a case that alleged Clean Air Act violations by 15 company facilities for glass bottle manufacturing. In addition, one of the firm’s plastics division sites is now being considered for a Superfund designation.

"In states with a large forest products industry, like Maine, New Hampshire, Vermont, Washington, and Oregon, biomass from forest products residuals is an important fuel source. For example, it is used by the city of Burlington, Vt., as well as by my son’s alma mater, Middlebury College."

Asked about how Traylor, a former partner at Hogan Lovells LLP, could regulate past clients such as Dominion Energy Inc., Koch Industries Inc. and TransCanada Corp., Bodine said, "If confirmed, I will make sure that all OECA staff recuse themselves from cases in which they have a conflict of interest and abide by their obligations under federal ethics laws and regulations and, where applicable," President Trump’s ethics order.

Bodine said she supports the president’s decision to leave the Paris climate agreement.

Bodine was also asked about whether she would commit to EPA’s role in ensuring the United States plays "a leadership role" in protecting the global environment. She responded, "If confirmed, I will enforce U.S. law."

Sanders also probed Bodine on how she would handle EPA’s proposed budget cuts and a move to state sovereignty over environmental protection.