Engineers work to cut costs and emissions in geothermal power 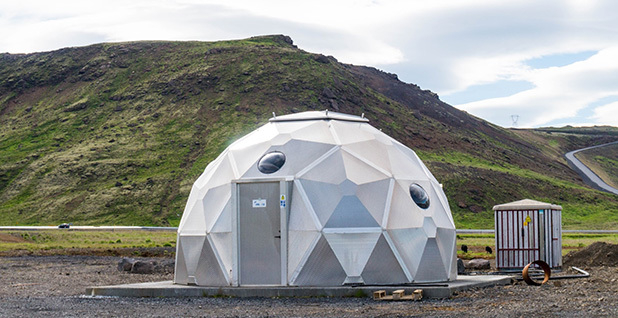 A geodesic dome covers a geothermal wellhead at the Hellisheiði Power Station in Iceland. Photo by Umair Irfan.

HENGILL, Iceland — Billowing vapor clouds and the faint smell of boiled eggs lead visitors over a gravel road toward the Hellisheiði Power Station, 15 miles southeast of the Icelandic capital, Reykjavik.

Here, at Iceland’s largest geothermal heat and power plant, perched on a rocky active volcanic ridge, researchers recently demonstrated that they could take carbon dioxide and turn it into rock 1,500 feet underground. That’s a result that could shrink the carbon footprint of geothermal energy as well as create a new route for carbon capture and sequestration.

However, the technology has high upfront costs, finding adequate geothermal resources can be a risky investment, and some instances of geothermal power emit greenhouse gases. In parts of the world, geothermal energy can emit more carbon dioxide than coal (ClimateWire, July 22).

The CarbFix project at Hellisheiði tackles the emissions side of geothermal energy. The plant produces 303 megawatts of electricity and 133 MW of hot water, and in 2012, engineers began reinjecting carbon dioxide and hydrogen sulfide into geothermal wells at wellheads covered with geodesic domes instead of allowing these gases into the air.

The goal was to get basalt rocks rich in calcium and magnesium to react with the injected gases to form calcium carbonate limestone, permanently locking emissions away. In nature, this process can take thousands of years, but engineers set out to create conditions that would make it happen in five.

The results showed the mineralization was even faster.

"What I really like about the CarbFix solution is using the natural processes," said Edda Sif Pind Aradóttir, project manager for CarbFix at Reykjavik Energy. "After two years, it’s just rock, and it stays that way."

Aradóttir and her team published their findings last month in the journal Science (ClimateWire, June 10). The project started out injecting 250 tons of carbon dioxide in 2012 and ramped up to 5,000 tons in 2014.

"We were gradually gaining the knowledge that this would be the result we would see," she said. "I think it’s time to break out the Champagne again."

The U.S. Department of Energy is working on ways to reduce some of the uncertainties that go into finding suitable areas for geothermal energy. In parts of the world that aren’t as geologically blessed as Iceland, and without telltale geysers and wisps of steam at the surface, it can be a tremendous gamble to drill wells thousands of feet deep, not knowing if there is enough useful energy to defray the cost.

"You know where to put the solar panels, but with geothermal, it’s hard to know where to drill," said Bud Johnston, laboratory program manager for geothermal technologies at the National Renewable Energy Laboratory.

The United States is actually the world leader in geothermal energy capacity, with 3.45 gigawatts in 2015, according to the World Geothermal Congress. But that only provides 0.4 percent of electricity production in the United States, and experts say the potential could be much greater.

Earlier this week, DOE announced $11.5 million in federal funds to drive eight research projects in geothermal prospecting and carbon storage, from more robust wellbores to new ways to monitor what’s going on miles below the surface.

A better understanding of the ground below could unlock new ways to keep greenhouse gases from filling the skies above.

The agency is also now examining candidate sites for FORGE, the Frontier Observatory for Research in Geothermal Energy. The facility will serve as a test bed for various geothermal technologies, particularly enhanced geothermal systems, where a fluid is injected and heated over hot rocks underground, as opposed to conventional geothermal systems that are limited to sites where steam is naturally present.

Tim Reinhardt, program manager for systems analysis and low-temperature and co-produced resources programs in DOE’s Geothermal Technologies Office, said the United States has the geothermal resources to deploy around up to 9 GW of known hydrothermal resources, an additional 30 GW of undiscovered hydrothermal power, between 7 and 10 GW of "near-field" enhanced geothermal energy, and over 100 GW of additional "greenfield" enhanced geothermal energy.

"The potential is immense," he said.

The challenge of cost

In the push for more energy with less greenhouse gas emissions, geothermal energy could be a vital complement to intermittent renewables, once costs come down.

"The upfront costs of geothermal are relatively high compared to other renewables," Reinhardt said. However, over the lifetime of the plant, around 30 years, the levelized costs of energy end up being comparable to other types of renewables, he added.

Enhanced geothermal systems can take some of the guesswork out of geothermal prospecting and may help drive costs down. "EGS in the long term is the solution to a lot of the upfront risk," Reinhardt said.

"In order to get a nice demonstration project for [carbon] storage, the biggest cost is getting the CO2," said Howard Herzog, a senior research engineer for the Massachusetts Institute of Technology’s Energy Initiative. "The real critical thing is to keep water out. If you have condensation, there will be some CO2 in the water."

That carbon dioxide can then react with water to form carbonic acid, a substance that can corrode materials used in geothermal power plants.

Despite the technical challenges, geothermal power coupled with carbon storage may be necessary to keep the world from warming beyond dangerous levels.

"It’s impossible to limit the temperature rise to 2 degrees [Celsius] if we do not carry out carbon capture and storage — at least, you know, until we have switched over to renewables completely," Aradóttir said.

Clarification: This story was updated to clarify the amount of geothermal potential in the United States.