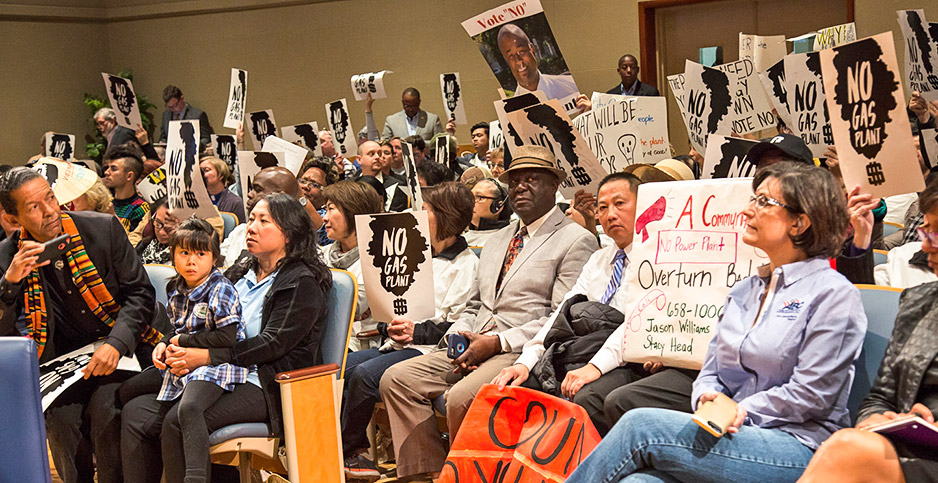 The revelation followed a recent story from The Lens, a nonprofit news outlet, that said paid actors attended meetings about the natural gas-fired project in October and February.

Entergy was adamant yesterday in its own investigative report that it didn’t authorize and wasn’t aware of the payments. But it acknowledged that a unit of Entergy contracted with the Hawthorn Group for help in "organizing local grassroots support." Entergy said it found that Hawthorn used an outfit called Crowds on Demand, which paid people to attend or speak at two meetings.

The pay-for-support narrative is now weighing on Entergy’s roughly $210 million power station plan, which the New Orleans City Council found to be in the public interest by a 6-1 vote in March. Logan Atkinson Burke, executive director of the New Orleans-based Alliance for Affordable Energy, is calling for the council to rescind the March decision. She said there needs to be a transparent process and an independent investigation of Entergy’s practices.

The unhappiness among Entergy’s critics doesn’t appear likely to go away anytime soon.

"Now that we know that Entergy was ultimately responsible for those folks coming to the public meetings, it really behooves our City Council to take back that vote in favor of the gas plant," said Monique Harden, counsel for the Deep South Center for Environmental Justice.

New Orleans-based Entergy apologized for what happened, but it wants to move ahead with the 128-MW power station. The project would use seven gas-fired reciprocating engines.

The council approved the project after about 21 months of proceedings, multiple meetings, hours of public comment, and extensive testimony and exhibits, according to Emily Parenteau, an Entergy spokeswoman. She added that Entergy also had community meetings to tell people about a need for local peaking generation in the city.

"We believe the New Orleans Power Station is the right project for the City of New Orleans, and we believe we are the right partner to help bring it to fruition," Parenteau said in a statement.

Councilmember Jason Williams said the authorization for the project was based on a large record. But, in a recent statement, he outlined his frustration that the process was compromised because of artificial grass-roots organizing, or astroturfing.

"The harmful impact of this nefarious practice is unfortunate, unappreciated and in contravention to true democratic deliberative process," Williams said. Despite much "evidence supporting the necessity of the plant," he said, "we cannot move forward until this issue is resolved."

Williams said he didn’t believe astroturfing had been deemed illegal. Still, he said he’ll work to restrict it in New Orleans.

Williams, the council president, issued a joint statement yesterday with Councilmember Helena Moreno, the council vice president, that acknowledged efforts by Entergy to report findings. But Williams and Moreno said the allegations "warrant a fully independent review by the council or by a third party investigator hired by the council."

One of the factors at play is that five of the seven current City Council members weren’t in place when the March decision occurred. One of the recently departed members, LaToya Cantrell, is now New Orleans’ mayor. Only Susan Guidry, who’s no longer on the council, voted against the Entergy plan in March. Williams also was a member and voted in support of the gas plant.

Awaiting the next move

Another factor is litigation related to open meetings law as well as an appeal of the council’s decision. Critics argued that some people couldn’t make it into a public meeting.

A unit of Entergy also applied to the Louisiana Department of Environmental Quality for an air permit needed for the plant, and the company has been awaiting a decision.

Eric Smith, associate director of the Tulane Energy Institute at Tulane University’s A.B. Freeman School of Business, sees a future for the proposed plant even though the optics are bad at the moment. Critics have argued Entergy didn’t fully explore alternatives, but Smith said New Orleans needs the local generation.

"There will be some chest-beating. There may well be a revote," Smith said. But he said he expects "the vote will still come out with the plant coming online."

Entergy outlined a series of steps it’s taking in a news release, including severing its relationship with Hawthorn and putting that firm and Crowds on Demand on a "do not hire" list. Fees paid to Hawthorn for work related to the proposed plant will be returned, Entergy said, and the money will be donated to charitable organizations.

Entergy said its investigation started after a lawsuit was filed in April.

Entergy said many supporters who attended an October meeting were retirees, employees, union members and others who wanted to be there to show support and were not compensated for that.

But the company said Crowds on Demand paid at least some people who were recruited. Entergy said its investigation showed that Crowds on Demand tended to use gift cards or cash in the range of $50 to $200. Some supporters also were paid by Crowds on Demand for being at a February meeting, according to Entergy.

Efforts to obtain comments yesterday from Hawthorn and Crowds on Demand weren’t successful.

But Hawthorn had a statement today saying, "Paying participants was not requested or authorized by our client or by Hawthorn. Clearly there was a misunderstanding, which we deeply regret."

Entergy said it would answer questions from councilmembers and that the City Council would receive its investigative report. The company outlined other steps it is taking, including amending a supplier code of conduct to expressly prohibit paying supporters to attend or speak at the type of meetings in question.

Those actions "run directly counter" to how Entergy conducts its business, according to a statement from Marcus Brown, Entergy’s general counsel. He apologized to the City Council, the community and supporters of the New Orleans power station who took time to be at public meetings.

"We are extremely grateful for that support, and regret that the poor judgment and unauthorized actions of a few created this situation," Brown said.

But Harden, counsel for the Deep South Center for Environmental Justice, said Entergy wasn’t forthcoming as the allegations unfolded. She is part of an effort that’s asking public officials to investigate potential legal and ethical violations from the hiring of actors to take up seats and talk at public meetings.

More details are needed about what happened, Harden said.

"The ball is in the City Council’s court now," she said. "Entergy’s revealed at least some of its cards — we don’t know the full extent — and now the council really has to make the next move."