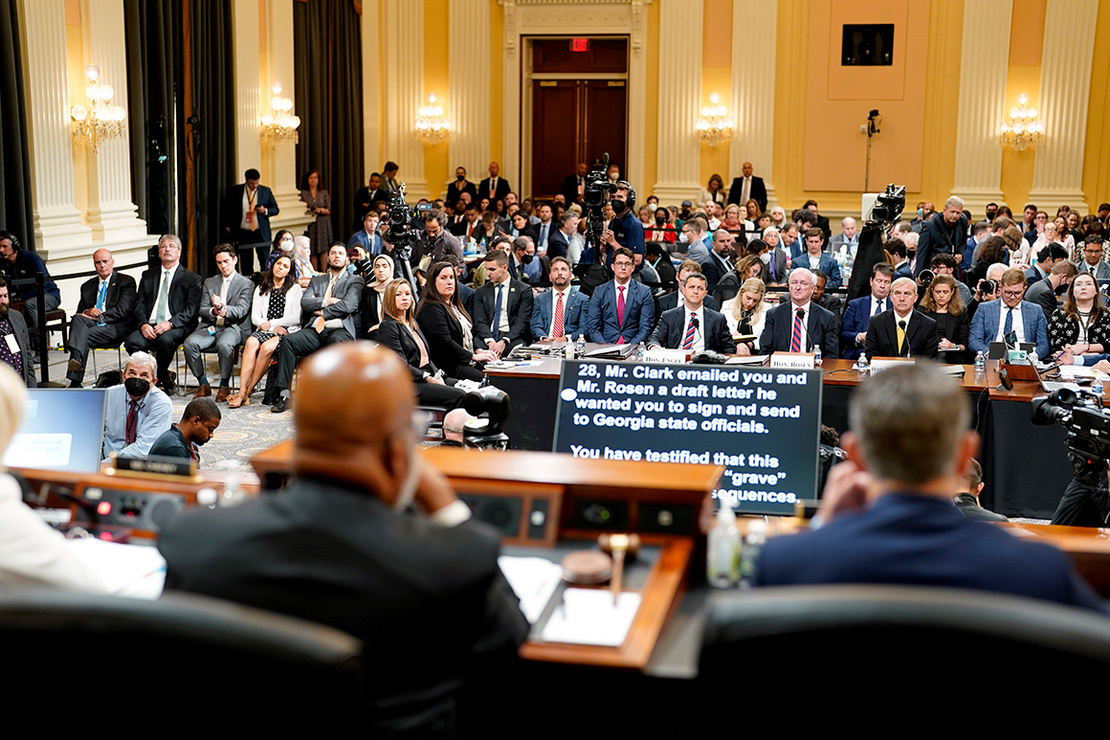 Steven Engel, former assistant attorney general for the Office of Legal Counsel; Jeffrey Rosen, former acting attorney general; and Richard Donoghue, former acting deputy attorney general preparing to testify yesterday at the fifth hearing held by the Select Committee to Investigate the January 6th Attack on the U.S. Capitol in the Cannon House Office Building in Washington, D.C. The bipartisan committee, which has been gathering evidence related to the Jan. 6, 2021, attack at the Capitol for almost a year, is presenting its findings in a series of televised hearings. On Jan. 6, supporters of former President Donald Trump attacked the Capitol in an attempt to disrupt a congressional vote to confirm the electoral college win for Joe Biden. Doug Mills-Pool/Getty Images

Environmental lawyers are defending their honor after an ex-Trump administration official was mocked on Capitol Hill for his role in challenging Joe Biden’s 2020 election victory.

The legal specialty was thrust into the center of the ongoing congressional hearings over the Jan. 6, 2021, attack on the U.S. Capitol yesterday when lawmakers’ focus turned to Jeffrey Bossert Clark, who led the Justice Department’s Environment and Natural Resources Division during the Trump administration.

Clark was mocked by his former Trump administration colleagues, who said he was jockeying to become acting attorney general so he could bolster former President Donald Trump’s baseless claims of election fraud when his only background was as an environmental attorney.

Before his work at DOJ defending Trump’s environmental policies, many of which rolled back rules put in place by the Obama administration, Clark was known for representing BP PLC in its litigation over the 2010 Deepwater Horizon explosion in the Gulf of Mexico and the spill of more than 200 million gallons of oil that followed (Greenwire, Jan. 26, 2021).

Clark now faces allegations that he pressured his former DOJ colleagues to back Trump’s claims of election fraud surrounding the 2020 presidential contest.

Former Trump administration officials recounted to the House special committee investigating the Jan. 6 attack that Clark had attempted to get DOJ leaders to sign off on a letter to Georgia officials falsely stating that the department had “taken notice” of election irregularities.

After officials declined, Clark told them that Trump planned to oust acting Attorney General Jeffrey Rosen and install Clark as acting attorney general, according to testimony to the committee (E&E Daily, June 24).

“I made the point that Jeff Clark is not even competent to serve as the attorney general. He’s never been a criminal attorney; he’s never conducted a criminal investigation in his life,” Trump’s acting Deputy Attorney General Richard Donoghue told the panel.

According to Donoghue, Clark told him at the time, “Well, I’ve done a lot of very complicated appeals, civil litigation and environmental litigation, and things like that. And I said, that’s right — you’re an environmental lawyer. How about you go back to your office and we’ll call you when there’s an oil spill.”