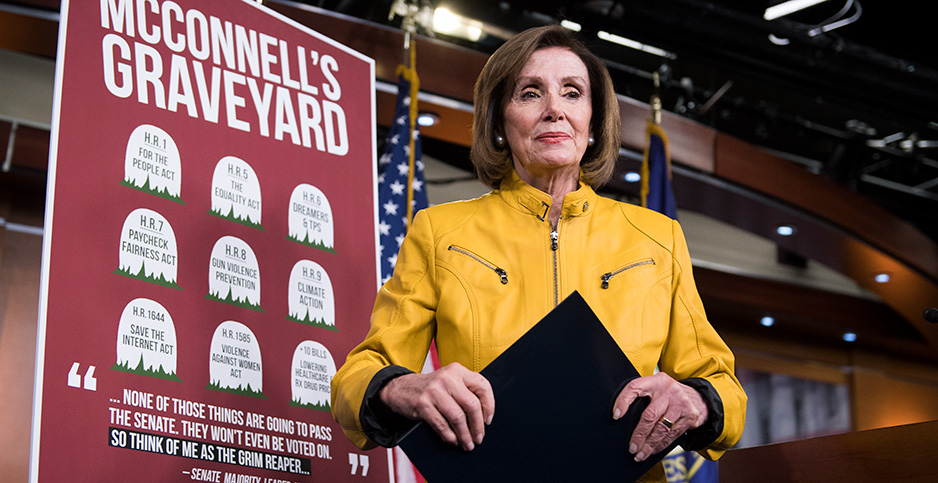 House Speaker Nancy Pelosi (D-Calif.) during a press conference last week highlighting the Senate's inaction on legislation. Pelosi and other Democratic and Republican leaders will try this week to settle on a bipartisan accord on fiscal 2020 spending. Tom Williams/CQ Roll Call/Newscom

The next two weeks will be crucial for energy and environment debates in the House, with the new Democratic majority taking up most major spending bills for fiscal 2020.

Partisan votes are expected in coming days over the U.S. role in international climate accords, the fate of a controversial Alaska mine and other hot-button issues.

The House is in the midst of debate on its first minibus spending package and will begin considering its second soon.

Votes are pending on an amendment to the State-Foreign Operations portion of the first package, offered by Rep. Paul Gosar (R-Ariz.), to bar the use of funds for the U.N. Framework Convention on Climate Change.

A second Gosar proposal would bar U.S. funds for the UNFCCC, the Intergovernmental Panel on Climate Change and the U.N. Green Climate Fund.

The House will also vote on a proposal by Rep. Gary Palmer (R-Ala.) that would strike language preventing the United States from withdrawing from the Paris Agreement as well as a provision that allows related payments.

Additionally, Republicans have demanded a roll call vote on an amendment by Rep. Jodey Arrington (R-Texas) to bar funds from being used for the U.S. commitment to the UNFCCC.

The House today is also expected to begin working through dozens of amendments made in order to the Defense title of the minibus, including a proposal from Rep. Hakeem Jeffries (D-N.Y.) that would require a Defense Department study on the immediate national security risks posed by climate change.

Democrats are allowing the votes on amendments because they believe voters favor action on climate change and are eager to paint Republicans as deniers of global warming.

Once Defense is done, the chamber will dive into the 51 amendments cleared for floor debate to the Energy-Water Development title, including a proposal by Rep. Jared Huffman (D-Calif.) that would bar the Army Corps of Engineers from spending funds to complete an environmental analysis for the proposed Pebble mine in Alaska (E&E Daily, June 12).

The House is expected to pass the first minibus as soon as tomorrow and then turn to a second package, which will contain the Commerce-Justice-Science, Agriculture-Rural Development, Interior-Environment, Military Construction-Veterans Affairs, and Transportation-Housing and Urban Development bills.

The Rules Committee will meet this evening and, if necessary, tomorrow to decide what amendments will be allowed for floor debate. Lawmakers are not expected to complete work on the second minibus until next week.

Climate and offshore drilling amendments will be prominent. Bipartisan amendments have been proposed by coastal Republicans and Democrats that would block Interior and NOAA from a range of offshore activities, including seismic air gun testing and permitting, as well as drilling or hydraulic fracturing in waters off the East and West coasts (E&E Daily, June 14).

House Majority Leader Steny Hoyer (D-Md.) is passing the spending bills in packages to build political support and move them more rapidly across the floor.

He said last week that he hopes to complete work on all 12 annual bills before Congress leaves for the July Fourth recess at the end of next week.

Senate Republicans, meanwhile, continue to wait for a broader budget deal before moving any fiscal 2020 bills.

But they are due to approve a supplemental border spending measure this week with a goal of passing it before July Fourth.

The Senate Appropriations Committee will mark up a proposal expected to largely follow a $4.5 billion request made by the Trump administration last month.

It would propose $3.3 billion for humanitarian relief related to the U.S.-Mexico border migrant crisis and $1.2 billion for Homeland Security border-related processing operations.

"I’m going to bring it up free-standing next week and see if [Democrats] really aren’t interested in dealing with this mass of humanity that we have to take care of at the border," Senate Majority Leader Mitch McConnell (R-Ky.) said yesterday on Fox News, stressing GOP support for the deal.

He also said it would not contain any money for building a border wall widely opposed by environmental groups.

But Democrats don’t seem ready to go along with the package without clear guidelines for how the dollars would be spent.

Negotiations also are set to resume this week between the White House and Capitol Hill leaders over a deal that would increase federal spending over the next two years, as well as raising the nation’s borrowing limit.

If there is no accord by early fall, budget sequester cuts would be enacted and the nation could default on its debt.

Schedule: The Senate Appropriations Committee markup is Wednesday, June 19, at 10:30 a.m. in 106 Dirksen.