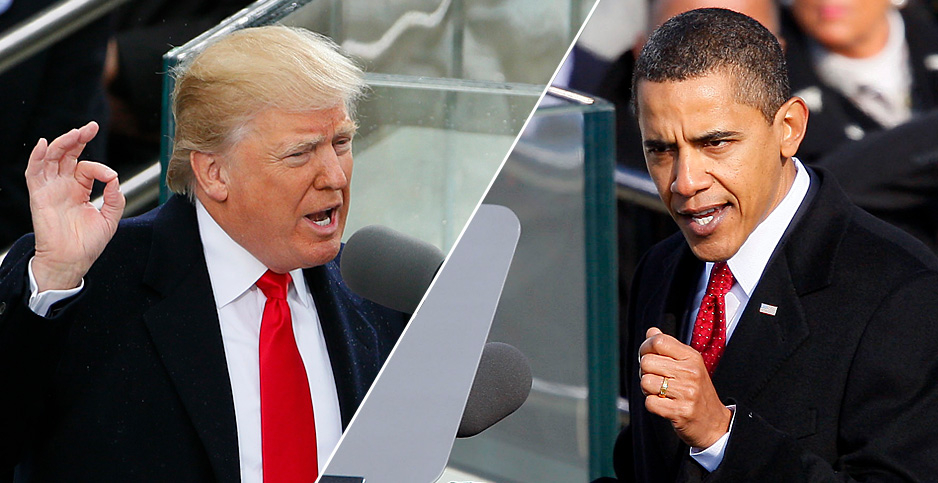 The president’s inauguration speech is not, generally speaking, a place for details, but it can set a tone for the presidency that trickles down to the administration’s agenda — including on energy and the environment.

More platitude than policy, the inaugural address has served for centuries as a place for the president to lay out the thesis statement of his presidency, a broad vision of the country the new administration is attempting to unify or fix.

"Presidents tend to not deal with environmental issues in inaugural addresses," said Douglas Brinkley, a historian at Rice University who studies the presidency.

"They’re steeped with grand, sweeping rhetoric about America’s past and what is democracy," said Brinkley. "It’s unfortunate."

But the inaugural address has sometimes colored a president’s legacy, and the last century has seen the traditional speech churn out some noteworthy firsts.

President Obama, for example, was the first to mention climate change, with a nod to how "the ways we use energy strengthen our adversaries and threaten our planet" in his first inaugural address in 2009.

Obama went even further in his 2013 second inaugural, offering a more specific pledge to "respond to the threat of climate change."

"Some may still deny the overwhelming judgment of science, but none can avoid the devastating impact of raging fires and crippling drought and more powerful storms," Obama said, calling for the United States to lead in a transition toward clean energy.

Obama’s second speech also had an unusual scheduling problem. It took place on Jan. 21 after a private swearing-in the day before because the constitutionally mandated inauguration date — Jan. 20 — fell on a Sunday.

While the climate mentions in Obama’s speeches were brief, they did foreshadow effort, if not successful action.

Democrats tried and failed during his first term to pass a climate change bill, and during his second term, EPA finalized the Clean Power Plan, which was halted in court and later repealed by the Trump administration.

President Trump’s inaugural address, meanwhile, was notable for its dark rhetoric and his pledge to end "American carnage," a phrase that later took on different meaning after two impeachments and a pandemic that has killed more than 400,000 Americans.

Ironically, Trump also promised to "free the Earth from the miseries of disease" and "harness the energies, industries and technologies of tomorrow," though his administration spent much of its effort at EPA and the Interior Department deregulating to prop up fossil fuels.

After that tumultuous term, President Biden’s address today was unique in American history. Surrounded by the thousands of National Guard troops who have descended on Washington after the Capitol riot, the traditional crowd was replaced by flags adorning the closed National Mall amid security and COVID-19 concerns (see related story).

From Nixon to Bush

While climate has only shown up in inaugural addresses recently, previous presidents have briefly touched on the environment.

Richard Nixon, who came to power in 1969 at the height of the environmental movement and went on to create EPA, listed "protecting our environment and enhancing the quality of life" as one of the nation’s urgent goals.

Many presidents didn’t mention environment and energy at all during their inaugural speeches.

While George W. Bush’s two terms were generally derided by environmentalists, he made energy development a priority, famously declaring during his 2006 State of the Union speech that "America is addicted to oil."

President Reagan, too, left energy issues out of both his inaugurations, but his 1981 speech did produce one of the most iconic lines of his presidency: "Government is not the solution to our problem; government is the problem."

‘Passing of the baton’

But even as far back as the early 20th century, some presidents touched on conservation of natural resources in their inaugural speeches.

"We have squandered a great part of what we might have used and have not stopped to conserve the exceeding bounty of nature, without which our genius for enterprise would have been worthless and impotent, scorning to be careful, shamefully prodigal as well as admirably efficient," President Wilson said in his 1913 address.

President Franklin Roosevelt called for the government to get involved in numerous new areas in his 1933 address, including to "reorganize the use of our natural resources."

"Inauguration is simply a passing of the baton from one administration to another, and it tends to have the kind of language that might be carved in marble for the ages," Brinkley said. "You’re really trying to come up with spectacular, Bartlett’s book of quotations type of lines."