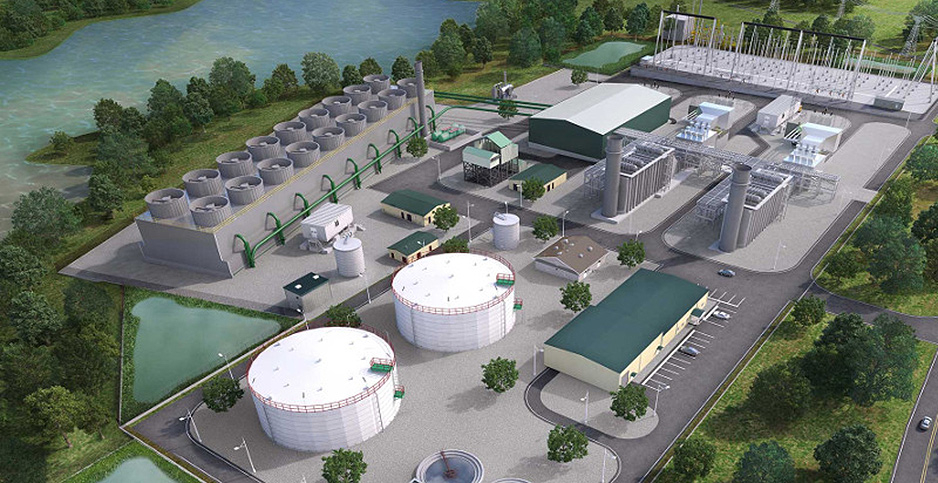 A 2019 mock-up of a proposed natural gas power plant in Charles City County, Va. Plans for the 1,060-megawatt project are on hold due to funding and environmental justice concerns. NOVI Energy

A $350 million gas project spanning much of eastern Virginia has been put on hold, in part due to environmental justice concerns.

Virginia’s State Corporation Commission (SCC) recently deferred action on the proposal by Southern Co. subsidiary Virginia Natural Gas (VNG). The agency told the company to come back by the end of the year with more details on financing and environmental justice issues.

The project, a series of pipelines, compressor stations and other infrastructure stretching from the exurbs of Washington to Hampton Roads in southern Virginia, has come under fire from environmental groups for potentially locking in years of natural gas use.

They’ve been joined by a group of residents of Charles City County, a poor, majority-minority county east of Richmond. The project is designed to supply a natural gas power plant in the county, and another plant has been proposed. While supporters say the facilities would bring economic development, opponents say developers are pushing big polluters on a vulnerable population.

"We were an easy target. They knew exactly what they were doing," said La’Veesha Rollins, a Charles City County native who is part of the group fighting the project. "We get nothing out of this deal."

Officials at VNG say they remain committed to the project. Spokesman Rick DelaHaya said the company intends to work with the SCC and other agencies "to develop a model project that meets all regulations."

At the center of the project is a proposed 1,060-MW combined-cycle natural gas power plant known as C4GT, a merchant plant that would sell electricity to the wholesale market through grid operator PJM Interconnection.

Another plant, called the Chickahominy Power Station, was announced in 2018 and is to be located within a mile of C4GT.

Called the Header Improvement Project (HIP), VNG’s plan involves 6 miles of new pipeline for an interconnection to the Transco line in Prince William County, Va. The plan would also add 18 miles of pipelines in existing corridors and three new or expanded compressor stations. One of the compressor stations would be built in an existing metering location in a minority neighborhood of Chesapeake, Va., south of Norfolk.

VNG officials say the project would bring jobs, development and tax revenue to Charles City County and beyond, along with gas and electric reliability, noting that gas burns cleaner than coal. They call C4GT among the most efficient natural gas-fueled power plants to be built in Virginia. They also stress that in most cases, HIP uses existing infrastructure corridors to minimize its effects.

Environmental groups say the project moves Virginia toward continuing dependence on natural gas, when the Democrats who now run the state have been trying to put it on track for more renewable energy.

Dominion Energy Inc. recently canceled its $8 billion Atlantic Coast pipeline project and sold off its gas transmission and storage assets, continuing a transition away from fossil fuels and toward a net-zero carbon goal (Energywire, July 6).

One of the many permitting problems for Atlantic Coast came when the 4th U.S. Circuit Court of Appeals scrapped approval of a natural gas compressor station in Union Hill, Va. — a historically Black community — because state regulators had failed to conduct a full analysis of the facility’s impact on an environmental justice community (Energywire, Jan. 8).

In Charles City County, opponents of the VNG power plants have banded together as Concerned Citizens of Charles City County, commonly shortened to "C5." Members say the plants would bring pollution to an area that lacks the services and emergency response capabilities to handle such a large facility.

For example, C5 founding member Benita Lewis said a house recently burned to the ground because there wasn’t water to fight the fire.

Internet access is limited in the area, and Lewis said many people weren’t able to find out about the project. At first, residents were told the development would add about 3,000 jobs. But those are for construction. It will create 35 permanent jobs to run the plant, but Lewis suspects those who get such work would be likely to live in the more affluent communities nearby.

The compressor station in Chesapeake has reignited fears of minority residents who unsuccessfully fought a pipeline into their community. Opponents say that 6,500 people, mostly minorities, are within 1 mile of the site. Some call that radius the "blast zone." The opponents have joined with environmental groups and those fighting the power plants in Charles City County.

Energy regulators at the SCC held two public hearings by telephone in May and June, during which many of the opponents aired their objections, despite technical problems.

Participants were expecting a decision as early as August. Instead, the SCC issued a ruling late last month directing VNG to provide more answers on financing and environmental justice during the first of the two permitting phases for the project.

The C4GT plant has run into funding problems, at least in part because of the coronavirus pandemic. The SCC said in its order that project financing is in doubt, and C4GT officials have asked VNG not to spend money on the project beyond getting SCC approval. The agency said it wants more information to ensure that ratepayers won’t bear the cost of the Header Improvement Project if C4GT is shut down.

"It is imperative that VNG’s other customers not be left ‘holding the bag’ for the costs of the project should C4GT cease operating before those costs have been fully recovered," SCC officials said in a statement in June.

The other power plant is being developed by a Herndon, Va., company called Chickahominy Power LLC, which hired another limited liability company called Balico to manage the project. A subsidiary of Argan Inc. was hired to build it. But in a June regulatory filing, Argan reported there were problems with getting gas supply and financing for the project, saying, "We currently cannot predict when construction will commence, if at all."

The SCC said VNG hasn’t yet "reasonably addressed" how it plans to satisfy environmental justice concerns for the project and ordered the company to submit more detailed information.

Despite the delay, Rollins said C5 isn’t ready to talk about victory until the proposal is gone.

"I’m not going to take this as a defeat" for the project, she said. "I don’t believe this is going away."