Environmental justice: From the margins to the mainstream 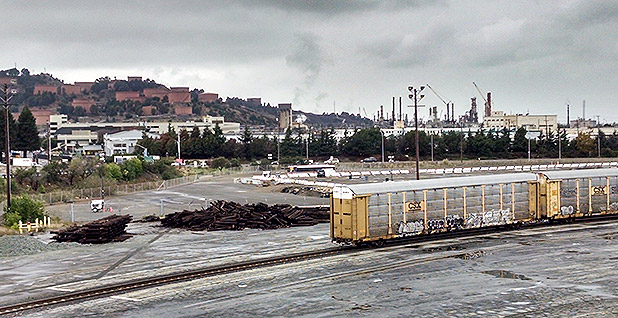 The parking area outside Chevron Corp.’s 3,000-acre oil refinery offers a view of a hillside dotted with brick-red tanks. It’s one stop on the "toxic tour" led by Taruc’s Oakland-based Asian Pacific Environmental Network (APEN) and a handful of environmental groups as they seek to win over those in charge of California’s climate and energy policies.

Over the past seven years, environmental justice groups have gone from fringe to front and center of California’s climate change policies. Working alongside the state regulators they once sued, the organizations have won major victories in ensuring that improving conventional air pollutants and other benefits aimed at underserved communities become central to California’s climate change policies.

The first major display of their power was to secure billions of dollars in proceeds from the state’s cap-and-trade program for low-income communities and communities of color. The second has been to throw the survival of the cap-and-trade program into further uncertainty. Observers say a broadening of the traditional environmental agenda is underway, with the outcome still to be determined.

"Some of the bigger environmental groups are very aware that in California the future of the environmental movement has got to be very inclusive of people of color and address the needs of communities of color," said Bill Magavern, policy director for the Coalition for Clean Air. "I think we’re also seeing a real growth of the environmental justice movement in terms of scope and clout."

In her work with APEN, Taruc has given tours of Richmond’s rail yards and refineries to officials like Arsenio Mataka, assistant secretary at the California EPA. Taruc now serves as chair of the state’s Environmental Justice Advisory Committee, which makes recommendations to the California Air Resources Board, the agency in charge of achieving the state’s ambitious greenhouse gas targets for 2030 and beyond.

Gomez, meanwhile, sponsored a bill this year to increase the share of proceeds from the state’s cap-and-trade system that low-income and disadvantaged communities receive as direct investment, from 25 to 35 percent.

California, where Latinos have been the largest single ethnic group since 2014, is a harbinger of a shift in demographics that is altering the way policies are made. A growing bloc of lawmakers, motivated by economic equality as much as environmental concerns, have become invested in the state’s climate change policies.

Now, with the advent of the internet, "there’s distributed intelligence," he said. "We’re not in the world of Encyclopedia Britannica. People made fun of Wikipedia at the beginning, but now it’s the default. We live in a world of distributed intelligence. We must move from a small cabal of folks determining a path for California’s climate policies to the broad base of California’s electorate being engaged and providing solutions for California’s climate policy future."

At a panel discussion devoted to climate policy, Democratic lawmakers were asking questions about the spending of proceeds from the state’s cap-and-trade program. Nichols, he said, was dismissive of their concerns, steering them instead to the point that poor communities are receiving the benefit of cleaner air.

"That kind of sat as a ‘Let them eat cake’ moment," Gomez said. It turned him and others against Gov. Jerry Brown’s (D) attempt last year to get legislative approval to extend the state’s carbon-capping regulations through 2030. Fifteen members of the Assembly — 14 of them Democrats — abstained from the floor vote on S.B. 32, dooming it to failure.

When S.B. 32 finally did pass this September, it was accompanied by a bill by one of last year’s holdouts that put constraints on ARB’s power. Assemblyman Eduardo Garcia’s (D) A.B. 197 gave lawmakers two nonvoting seats on ARB’s board and specified that the state should prioritize direct emissions reductions rather than market-based mechanisms. The provision raises questions about the state’s choice of cap and trade going forward.

Garcia said he was motivated by his district’s high unemployment and asthma rates rather than the threat of climate change.

Gomez agrees. "It was framing environmental issues as an environmental justice and equity issue that really won the day when it came to S.B. 32," he said. "Without it, I don’t think it ever would have passed."

Mainstream groups that have been pushing for cap and trade to remain the state’s climate policy of choice are in a tough position. The Natural Resources Defense Council’s Latino engagement arm, Voces Verdes, limited itself to helping Latino business owners place op-eds in Spanish-language newspapers in support of S.B. 32 and A.B. 197.

"We were very much on the back end of it," said Adrianna Quintero, NRDC’s director of partner engagement. "There was so much leadership from the environmental justice community that all we wanted to do was say, ‘We’re here if you need us.’"

“The only thing whiter than the environmental movement is probably the Republican Party.”

Privately, some mainstream environmentalists and state regulators express frustration with environmental justice groups, saying that the state’s climate policies are not the right venue to address problems related to conventional pollution. One area where the tensions have come to a head is the debate over the role of carbon offsets within the cap-and-trade market, which EJ groups are trying to limit (ClimateWire, Sept. 20).

A Republican Latino observer said the new voting bloc could represent a compromise between traditional environmental constituencies and industry, which has also resisted the state’s climate policies, in part by appealing to an overlapping set of lawmakers known as "mod Dems."

"The only thing whiter than the environmental movement is probably the Republican Party," said Mike Madrid, a California GOP consultant. "They don’t reflect the reality of moderate California."