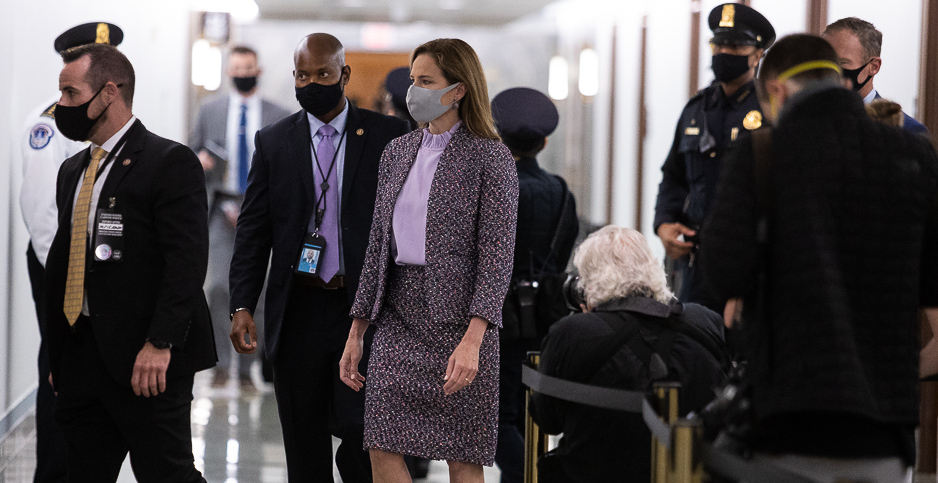 After hours of questioning Supreme Court nominee Amy Coney Barrett on health care, marriage equality and abortion, Senate lawmakers have turned their attention to the environment.

Clean water, air and climate policy stayed out of the spotlight this morning, but Senate Judiciary Committee members touched on related issues yesterday and may raise them again later today as Barrett, whom President Trump tapped to replace the late Justice Ruth Bader Ginsburg, faces a second round of questions from the panel.

Sen. Chris Coons (D-Del.) said during a news conference this morning that he would ask Barrett about precedent to highlight the "incredibly broad consequences of her confirmation."

He said he has identified 120 cases in which Barrett, who currently sits on the 7th U.S. Circuit Court of Appeals, could tip the scales on a wide range of issues, including environmental safeguards.

Green groups have raised concerns about how Barrett would rule on environmentalists’ standing to file lawsuits, an issue Ginsburg championed in the 2000 case Friends of the Earth v. Laidlaw Environmental Services (Greenwire, Sept. 26).

Barrett today offered an explanation — but no firm indication of her views — of standing. In order to sue over some issue, "it has to have affected you in some way," Barrett said in response to questions by Sen. John Cornyn (R-Texas). The court, she continued, cannot referee "policy disagreements only."

Sen. John Kennedy (R-La.) dug in on Barrett’s stance on climate in the late hours of yesterday’s proceedings.

She responded that she is "not a scientist" and doesn’t have "firm views" on climate change, eliciting rage from environmental groups that said any Supreme Court nominee needs to have seriously considered how greenhouse gas emissions affect severe storms, wildfires and other disasters around the globe (Climatewire, Oct. 14).

Barrett received praise yesterday from Republican lawmakers for a case she helped decide on the 7th Circuit that rejected an expansive application of the Clean Water Act.

She also walked committee members through explanations of how judges decide whether federal agencies such as EPA have exceeded their authority under statutes like the Clean Water Act, but she steered clear of any responses that would reveal how she would rule in such cases (E&E Daily, Oct. 14).

The Judiciary Committee is scheduled to complete its questioning of Barrett later today and will hear testimony from outside experts tomorrow.