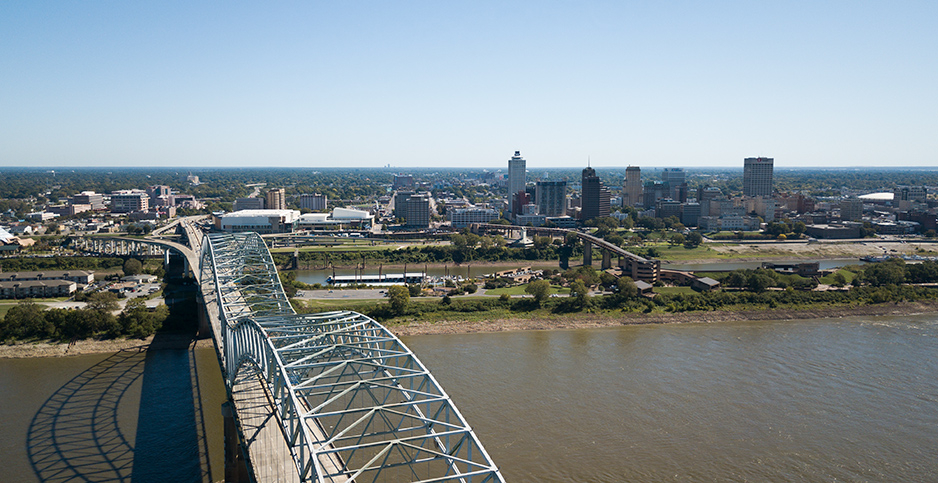 An aerial view of downtown Memphis, Tenn., from across the Mississippi River. Sean Davis/Flickr

The Memphis City Council yesterday stepped into the path of a proposed oil pipeline through the Tennessee city, casting its opposition as a fight against "environmental racism."

Several miles of the 49-mile pipeline would run through low-income, predominantly Black neighborhoods in South Memphis. Opponents say the area has already borne the burdens of too much pollution. They also say that a pipeline spill could damage the aquifer that Memphis and the surrounding region rely on for drinking water.

"This is my district, the Black district," said Councilman Edmund Ford Sr. "We don’t bother nobody. But we always have problems. We need to solve some of those problems."

Council members said they know they will likely wind up with a costly court fight against two "multibillion-dollar oil companies," as one put it.

"The goal is not to avoid a fight; the goal is to fight," said Councilman Jeff Warren, who called it a fight against "environmental racism."

Former Vice President Al Gore came out against the pipeline Sunday at a rally in Memphis. Gore, who also represented Tennessee in the Senate and championed the fight against climate change, called it a "reckless, racist rip-off."

Pipeline officials declined to comment on the council’s action. But in a recent open letter to the community, a Plains executive said the depth of the pipeline will be far more shallow than the aquifer, and he said the route mostly crosses vacant land.

"Plains All American has been safely operating a crude oil pipeline in Memphis for years and we expect Byhalia Connection to be no different," wrote Roy Lamoreaux, vice president of Plains, which is to build the pipeline. "Most homes or businesses here are located within five miles of one or more of the 10 existing oil or natural gas pipelines. This is true regardless of which Memphis neighborhood you call home."

The Byhalia line would essentially be an extension of the Diamond pipeline, a Plains-Valero joint venture that runs from Cushing, Okla., to Memphis, where Valero has a refinery.

It would connect Diamond to the Capline pipeline, a Marathon Pipe Line LLC conduit that is being reversed to deliver fuel to the Gulf Coast from the Bakken Shale region. The route sweeps around the core of the city in a semicircle, dipping into Mississippi.

The pipeline would sit above the Memphis Sands Aquifer, which the city relies on as a drinking water source. It would also run through a well field that taps the aquifer.

Proposed in 2019, the project is drawing fire from citizens groups including the months-old Memphis Community Against the Pipeline (MCAP) and environmental organizations including the Southern Environmental Law Center. SELC last year led the successful legal effort to stop the Atlantic Coast pipeline.

MCAP co-founder Justin Pearson said communities in southwest Memphis have suffered too much from the environmental damage caused by the city’s industry being clustered around them.

"Most people in the area have family members who have died of cancer," Pearson told members at a committee meeting yesterday morning.

Valero has a refinery on the west side of Memphis that has been served by a connector to the Capline pipeline. SELC attorney George Nolan said that line is smaller and doesn’t pose the same threat as the larger, high-pressure Byhalia proposal. City Council attorney Allan Wade noted that if another route were to be chosen, it would also lie over the aquifer.

Fights about large oil pipeline projects have generally involved state or federal governments. City Council fights have been rarer. Nolan told the council at a meeting early Thursday that the City Council does have the authority to require its approval for pipelines.

"There’s no question this is authorized by statute," Nolan said.

Wade said he can’t guarantee that the city would win a fight with the oil companies. "He thinks it’s a slam-dunk," Wade said of Nolan. "I don’t."

Rep. Steve Cohen (D-Tenn.) has urged President Biden to block the project (E&E Daily, Feb. 23). No action has been taken in response to the letter.

"I guess we’ll find out how much juice our congressman has," Councilman Chase Carlisle said in the committee meeting.

The council’s resolution focuses on drinking water concerns and urges the Byhalia developers to find another route. It also urges the city’s natural gas, electric and water utility — Memphis Light, Gas and Water — to work with the City Council on legislation to protect water well areas from pollution.

Clarification: This story has been updated to clarify how the City Council has proposed to regulate construction of new oil pipelines.