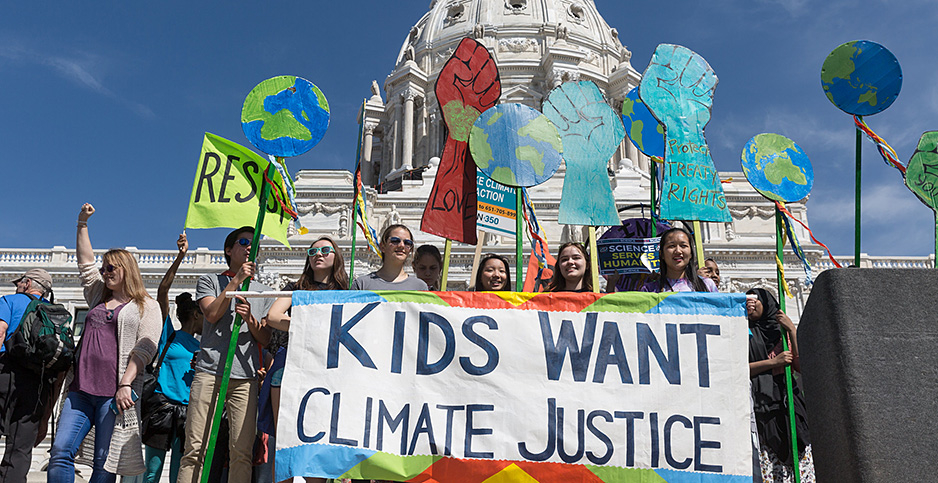 In state legislatures across the country, lawmakers are pushing to amend their constitutions to guarantee residents the right to a healthy environment.

The burgeoning movement for a "green amendment" could bolster the legal arguments of young people who are suing state governments over their alleged inaction on climate change, environmental lawyers say.

But it won’t be easy.

"The chances of one of these constitutional amendments passing in the next few months or the next year seem pretty low," said Sean Hecht, co-executive director of the Emmett Institute on Climate Change and the Environment at the UCLA School of Law.

"That doesn’t mean that I don’t think the movement has value," Hecht continued. "It elevates these issues. And there are real benefits to articulating that the state has to view itself as a trustee of natural resources."

While the language varies, the amendments generally assert that state residents have a fundamental right to clean air, clean water, a healthy environment and a stable climate system.

That language mirrors claims in a host of lawsuits brought by young people alleging that governments have failed to safeguard their right to a stable climate system, which they say is inherently enshrined in the constitution.

Juliana v. United States, also known as the kids’ climate case, is the highest-profile of these lawsuits. The 21 young challengers are expected to take their fight to the Supreme Court after the 9th U.S. Circuit Court of Appeals declined to reconsider its decision to scrap their case (Climatewire, Feb. 11).

Like the Juliana challengers, the young people involved in climate rights cases have encountered many setbacks. Judges have generally found that the youths have raised political questions for the legislative and executive branches of government to resolve, rather than the courts.

A green amendment could change that.

"If there were a state constitution that actually articulated that everybody has a right to a livable atmosphere and a stable climate, it seems pretty clear to me that cases in the mold of Juliana would have a stronger possibility of success than they have right now," Hecht said.

‘We are being very clear’

The concept of a green amendment was the brainchild of Maya van Rossum, a longtime environmentalist who’s known as the Delaware Riverkeeper for her work to protect the health of the Delaware River and its tributaries.

In 2013, van Rossum spearheaded a legal challenge to a 2012 Pennsylvania law designed to facilitate drilling for natural gas.

She notched a significant victory when the Pennsylvania Supreme Court found that major parts of the law violated Article 1, Section 27 of the state constitution, which requires the state to "conserve and maintain" public resources "for the benefit of all the people."

The court’s ruling in Robinson Township v. Pennsylvania breathed new life into that section of the state constitution, van Rossum wrote in her 2017 book "The Green Amendment: Securing Our Right to a Healthy Environment."

In a phone interview, van Rossum said she views her advocacy for a green amendment as separate from — and potentially more successful than — the youth climate litigation.

The young challengers "have been trying to have courts read into constitutional language or common law language … and stretch it to include the climate. But the language is not explicitly there," she said.

"The value of a green amendment is we are not trying to get judges to read anything into unclear language," she added. "We are being very clear."

‘The people need a voice’

The Montana Constitution already states that "present and future generations" have the right to a "clean and healthful environment." Following in Montana’s footsteps, 10 state legislatures are in the early stages of considering green amendments, with bills introduced and advancing through committees.

New York is the furthest along. Earlier this year, the New York State Assembly voted for the second passage of a green amendment bill. The measure will now be placed on the state ballot in November.

In New Mexico, a green amendment resolution passed the state Senate Rules Committee on a party-line vote last month. If the legislation clears both chambers, it would go to voters in 2022.

State Sen. Antoinette Sedillo Lopez, one of three Democratic sponsors of the measure, said she was inspired to propose a green amendment after reading van Rossum’s book and witnessing the fossil fuel industry’s political clout in the state.

"The oil and gas industry, and specifically the [New Mexico Oil & Gas Association], is very dominant in the state. Until I joined the Legislature, I didn’t know how dominant," she said in a phone interview off the state Senate floor.

When Sedillo Lopez introduced a recent bill to halt new fracking permits in the state for four years, she recalled, "you would’ve thought I’d committed a heinous crime. I was a pariah in the Legislature."

But when the Democrat held a town hall for her constituents in Albuquerque, she got a standing ovation for the bill.

Some conservative interests, however, have voiced opposition to the proposal.

The amendment seems "geared toward increasing legal costs and legal grounds to sue over some nebulous vision of not having access to clean air, clean water or a clean environment," said Paul Gessing, president of the Rio Grande Foundation, a libertarian-leaning think tank in Albuquerque.

Gessing said the New Mexico resolution ignores that the environment has gotten cleaner since the passage of laws and regulations that have curbed pollution from the oil and gas sector.

"There’s a lot of environmental groups out there that do not like the oil and gas industry and want to do anything they can do to essentially clamp down on it," he said.

The atmosphere in the courts

The challengers in the wave of youth climate cases have pioneered a different approach.

Our Children’s Trust, an Oregon-based nonprofit group representing young people in Juliana and other cases, has relied heavily on the public trust doctrine, which holds that the government must preserve natural resources for public use.

Courts have historically found that the doctrine applies to waterways. They have never affirmed the novel legal theory that it applies to the atmosphere, where record-high concentrations of greenhouse gases are warming the Earth.

Take New Mexico. In 2011, 16-year-old Akilah Sanders-Reed sued then-Gov. Susana Martinez (R) and the state government with the support of Our Children’s Trust, alleging that they had shirked their "public trust duty" to protect the atmosphere by repealing greenhouse gas regulations.

A state judge rejected that argument, and a three-judge panel of the New Mexico Court of Appeals agreed.

"We conclude that the courts cannot independently intervene to impose a common law public trust duty upon the State to regulate greenhouse gases in the atmosphere," Judge Timothy Garcia wrote in the ruling.

So does Julia Olson, the executive director and chief legal counsel of Our Children’s Trust, think a green amendment in New Mexico and other states would help her cause?

In an interview, Olson did not directly address that question, although she sought to walk a fine line between praising and dismissing the amendment push.

Olson noted that while the Alaska Constitution contains some language about "conservation of all natural resources," Our Children’s Trust helped 16 young Alaska Natives and Alaskans file a complaint against the state government alleging that its promotion of fossil fuels violated the state constitution. The case is currently pending in the Alaska Supreme Court.

"You can have these express rights in the constitution, but they’re only as strong as the system they’re built on," Olson said. "And if you can’t enforce them, then it’s just a piece of paper."

When it comes to embedding environmental rights in constitutions, the United States is the exception rather than the rule.

More than 80% of the United Nations’ member countries — 156 out of 193 — recognize the right to live in a safe, clean, healthy and sustainable environment, according to a recent report by U.N. Special Rapporteur David Boyd.

For example, the Constitution of Norway states that "[e]very person has a right to an environment that is conducive to health and to natural surroundings whose productivity and diversity are preserved."

In addition, Article 2 and Article 8 of the European Convention on Human Rights (ECHR) protect the rights to life, private life, family life, home and correspondence.

Still, challengers in Europe have had mixed success when invoking these provisions to try to force governments to slash planet-warming emissions.

In a landmark 2019 ruling, the Supreme Court of the Netherlands found that the Dutch government must do more to curb greenhouse gas emissions and protect residents from climate change under Articles 2 and 8 of the ECHR (Climatewire, Dec. 23, 2019).

But in a December decision, Norway’s Supreme Court ruled that the government hadn’t violated the country’s constitutional right to a clean environment when it sold leases for new oil exploration in the Arctic. The judges noted that Norway planned to export the oil — and the emissions stemming from it — to other nations.

Markus Gehring, an expert on European environmental law at the University of Cambridge, said that while such constitutional rights are "helpful," the Norwegian ruling ultimately revealed their limitations.