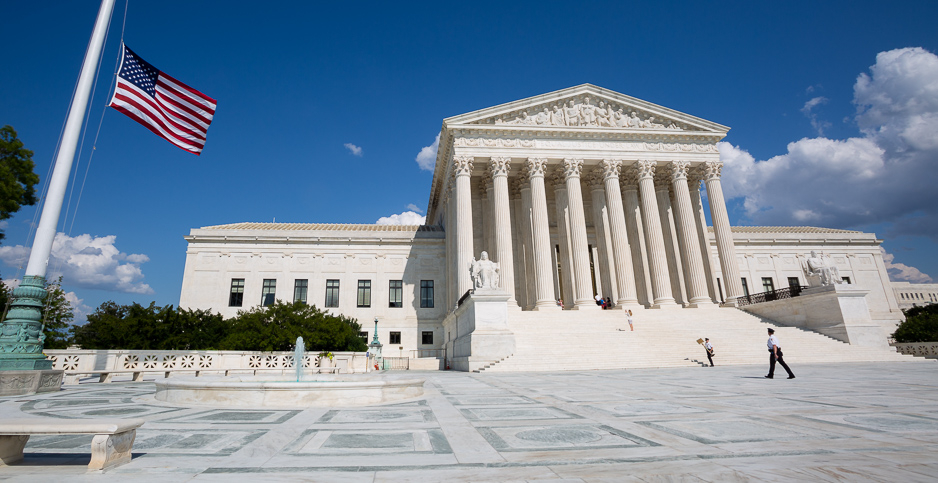 The Supreme Court will hear arguments Monday in a case that tests the federal government's limits on keeping its deliberations during the rulemaking process from the public. Francis Chung/E&E News

Should the public have access to documents that show why the federal government changed its stance on the impact an EPA rule would have on vulnerable species?

That’s the question the Supreme Court will set out to answer Monday in the case Fish and Wildlife Service v. Sierra Club, which deals with a Freedom of Information Act request for documents underpinning a 2014 rule for cooling water intake structures at power plants.

At the heart of the battle is a draft biological opinion in which FWS found that a proposed version of the rule would jeopardize endangered species. EPA ultimately revised the rule, and FWS determined that the new version posed no harm.

But the Sierra Club will argue next week that the public has the right to know what changed.

"In a world in which so much decisionmaking is done by agencies, democracy doesn’t work if people don’t know what’s happening at the agencies," said Sierra Club managing attorney Sanjay Narayan.

The arguments, which begin at 10 a.m. Monday, take place less than one week after the swearing in of Justice Amy Coney Barrett, the court’s sixth conservative member.

It’s unclear whether the case will split the court along ideological lines: Some of the Sierra Club’s typical courtroom foes — the American Farm Bureau Federation and the American Forest Resource Council — have lined up to back the environmental group’s arguments.

"This is one where if we lose, it’s as bad for industry as it is for us," Narayan said.

No parties have filed friend-of-the-court briefs in favor of the government, which invoked FOIA’s "Exemption 5" — meant to protect the deliberative process — to keep the draft Endangered Species Act analysis and other documents under lock and key.

"Removing these protections would discourage frank and robust decisionmaking," FWS spokesperson Laury Marshall told E&E News. "We believe the draft documents at issue in this case fall squarely within this category."

The solicitor general’s office filed the petition on behalf of FWS, boosting the chance that the high court, which can only hear a tiny fraction of the petitions it receives, would consider the case. But the fact that the Supreme Court granted the case in the first place raises red flags for Narayan and others who worry that the justices could reverse environmentalists’ lower court victories.

"You tend to assume that the court took the case because it thinks there’s a problem," he said.

FOIA Exemption 5 is one of nine exceptions that the government can invoke to protect documents from disclosure.

The provision shields records that were part of an agency’s deliberative process, which allows agency officials to have frank policy discussions and debates without fear of public exposure.

"The idea is good," said Dave Bahr, an Oregon-based lawyer who focuses on public records litigation. "The human condition, the thought process of humans can range from brilliant to balderdash."

But, he noted, it’s also easy for the government to use the exemption to hide shoddy decisionmaking or conceal internal failures to address crucial policy concerns: "It’s the exception that can swallow the rule."

FWS argued in its petition to the Supreme Court that because its ESA consultation on the impact of the EPA rule was still deliberative in 2013 when the draft biological opinion was released, the document should remain under wraps.

"If the decision below is left standing, it has the potential to inhibit the frank deliberations between agencies that are essential to ESA Section 7 consultations, which are in turn essential to the wide range of federal agency actions that may affect ESA-listed species," government lawyers wrote.

Travis Stills, an attorney with the firm Energy & Conservation Law in Colorado, said he has run into walls in his FOIA work during both Democratic and Republican administrations.

"To create this sort of black box decisionmaking process just because you’re a federal agency employee pretty much runs against our system," he said. "It invites corruption."

The case has captured the attention of industry groups that typically square off against the Sierra Club in court.

In this dispute, farm and forestry associations have thrown their weight behind the environmental group in a friend-of-the-court brief that echoes greens’ call for greater government transparency.

"As much transparency as possible is beneficial to all," said Travis Cushman, senior counsel for public policy at the American Farm Bureau Federation.

"None of this is to say that we have problems or issues complying with the ESA," said Fite. "It’s more just if something is required, it’s incumbent on the services to explain why."

He said the goal of the industry groups’ amicus brief was to speak to the Supreme Court’s newly expanded conservative majority, in the hopes of bolstering the Sierra Club’s odds of success in court.

"It really seems like the beneficiary of a win here would only be government secrecy," Fite said. "It certainly wouldn’t benefit industry. If the government wins here, the big loser here would be industry, not the environmental groups."

Reed Super, a private practice attorney serving as counsel for the Sierra Club, said he hopes the Supreme Court will pay attention to the fact that strange bedfellows have aligned against the government.

"I think that’s telling," he said. "It’s not just environmentalists that want to know what the government’s up to."