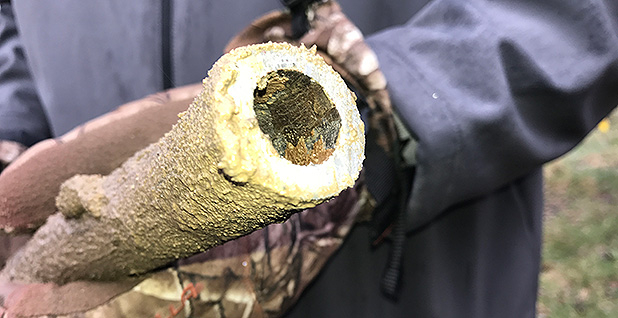 While EPA officials celebrate their new lead-in-drinking-water regulation, advocates lament the first update to the federal standards in nearly 30 years as a "lost opportunity."

The new standards, EPA says, will require water systems to act sooner to reduce lead levels in drinking water, and be more transparent about when lead levels are a risk to children and families (Greenwire, Oct. 10). The new rule will also better protect children in the most vulnerable areas, the agency says.

But public health experts say the new standard is more rollback than revamp, slowing the pace at which lead pipes will be replaced nationwide. While there are some much-needed improvements in the new proposal, they say, it won’t be enough to counteract other steps back.

"This is a huge lost opportunity, a huge disappointment, because there is a huge hole in the rule," said Erik Olson, senior strategic director for health and food at the Natural Resources Defense Counsel.

The most concerning provision in the rule, advocates say, is one that changes what utilities have to do if high lead levels are found in drinking water.

Lead pipes are the primary source of the neurotoxin in drinking water, and many advocates have called for EPA to require their wholesale removal, regardless of whether high lead levels are found at the tap.

Currently, utilities are required to remove 7% of lead pipes per year if lead concentrations are found to exceed 15 parts per billion at more than 10% of taps sampled.

The new rule would drop that lead pipe replacement rate to just 3% annually.

That means while under the current rule, utilities would have 13 years to remove their lead pipes, the new rule would give them 33 years to do so.

But EPA says the new proposal would still result in lead pipes being removed sooner because it would also close loopholes utilities can currently use to say they have removed more lead pipes than have actually been taken out of the ground. For example, utilities are currently able to retest at taps and count those where lead levels have decreased toward their 7% removal rate.

That wouldn’t be allowed under the new rule, which also wouldn’t allow partial lead service line replacements — where only the utility-owned section of pipe is removed but lead plumbing remains in people’s homes — to count toward the 3% goal.

"The old number was 7%, but there were offramps where you didn’t actually have to do 7%," EPA Administrator Andrew Wheeler said yesterday. "So our 3% is actually far more aggressive than what the previous regulation had. We believe we are on track to get the lead service lines replaced at a much faster rate than before."

The proposal itself says the changed provision will result in between 205,452 and 261,701 full lead pipe replacements over a 35-year period compared with the current regulation. More details on that calculation will likely become available in the next few weeks, when the proposal is published in the Federal Register, along with a cost-benefit analysis.

But Carl Reeverts, who worked in the Office of Water from 1975 to 2014, called that calculation "pie in the sky."

"It probably won’t show itself in reality," he said.

While EPA knows anecdotally that some utilities have taken advantage of loopholes to overestimate how many lead pipes they have removed, Reeverts said neither the agency nor the states actually track that data.

Closing the loopholes is a good idea, he said, but knowing its impact would be difficult to calculate.

"Reducing from 7% to 3% reduces the pace of lead service line replacement, period," he said. "If they are saying they can increase it, show me. I can’t check their math."

Asked why the agency didn’t just close the loopholes but maintain the 7% replacement rate, an EPA official briefing the press on background seemed to say the change was a concession to the drinking water utility agency.

"We think that 3% is a feasible level for a water system to replace if they have an action level exceedance," she said.

But Dimple Chaudhary, a senior attorney with NRDC who sued the city of Flint, Mich., to force it to remove lead pipes, said the city’s progress shows utilities can expedite lead pipe removals.

Under a 2017 settlement, the city has already removed more than 22,000 lead pipes and replaced more than 9,000 lead and galvanized steel lines. NRDC estimates just 1,000 more lead pipes need to be removed in the city.

"A water utility does not need more than three decades to replace its lead service lines," she said. "NRDC’s work in Flint shows that."

While most aspects of the new rule don’t roll back current standards, advocates take issue with the failure to improve upon them.

When it was established in 1991, the 15-ppb standard was part of a compromise with the water utility industry. At the time, the Centers for Disease Control and Prevention had a 10-micrograms-per-deciliter threshold for blood lead levels in children and infants.

EPA calculated that its 15-ppb action level for lead in water would result in less than 5% of children younger than 7 years old with blood lead levels exceeding that threshold. The CDC lowered that blood lead level threshold, bringing it down to 5 micrograms per deciliter, in 2012.

Because of the updated CDC standard, many public health advocates — and members of Congress like Rep. Dan Kildee (D-Mich.), who represents Flint — argued that EPA should lower its lead action level in the new rule.

Instead, the rule keeps the 15-ppb lead action level and creates a new standard, called a "trigger" level.

Under the proposal, once lead levels hit a 10-ppb trigger level of lead in water, utilities would have to consult with states about how to better use chemicals to prevent lead pipes from corroding, and also start thinking about removing lead pipes and how they would respond if or when their levels exceed the 15-ppb standard.

Public health advocates note that a lack of attention to corrosion control techniques can have real consequences — and was a major contributor to the drinking water crisis in Flint. But, they say, rather than establish a trigger level, EPA should have lowered the action level.

"It makes it seem like they are lowering something, but there is nothing actually required if you hit the 10 ppb," she said. "It is not a step forward."

Kildee, too, slammed EPA for not updating the action level, "which is already too high."

"The Flint water crisis should have taught policymakers at all levels of government that we must get serious about removing lead from our water systems," said Kildee, who has introduced legislation with Sen. Tammy Duckworth (D-Ill.) to lower the lead action level.

The proposed rule does not explain why there is no update to the 15-ppb action level, nor does it explain why 10 ppb should be the trigger level. But it does confirm that neither is a "health-based" standard.

"The EPA is proposing the lead trigger level because the Agency has determined that meaningful reductions in drinking water lead exposure could be achieved by requiring water systems to take a progressive set of actions to reduce lead levels at the tap," the proposal says. "The EPA proposes that 10 [ppb] is a reasonable threshold to require water systems to undertake actions."

Asked to clarify, the EPA official said the agency decided to maintain the 15-ppb action level "because it is based on feasibility of what water systems can achieve."

"The 10 ppb we believe is an appropriate value to trigger a system to both prepare for an exceedance of the action level and take steps to reduce lead levels," the official said.

Southerland argued that, as EPA did in 1991, the new proposal should detail how both the trigger level and the action level will affect the number of children with lead in their blood above the CDC threshold.

"If EPA could calculate that in 1991, then why can’t they today, in this new rule, tell us what the equivalent is?" she said.

Advocates, however, say there are genuine improvements in the new Lead and Copper Rule, including formally outlawing "cheating" techniques utilities used when sampling tap water to make it seem like lead levels were lower than they actually were.

The new rule includes requiring samples to be taken in wide-mouth bottles and prohibits flushing and cleaning or removing faucet aerators before sampling.

"We want to make sure we are testing under the actual conditions under which people are drinking their water," Wheeler said yesterday when announcing the rule.

Christa Kelleher, an assistant professor of earth sciences and civil engineering at Syracuse University, said those changes are major improvements.

"They are making the goal that information is power; we need better information about the location of lead pipes, better notification to homeowners, and that is coming front and center in these new proposed changes," Kelleher said.

"It is indeed a very good thing," agreed Olga Naidenko, the Environmental Working Group’s vice president for science investigations. "It is fair to say it is long overdue to not allow sample cheating."

While Wheeler said yesterday that the stricter monitoring requirements are one reason lead pipes will actually be removed at a faster pace under the new rule, experts say they aren’t so sure.

Kelleher said she believes there might be enough positive changes in the rule to outweigh the negatives, but she said she doesn’t understand why EPA changed the rate of lead pipe replacement.

"Why change that rate?" she said. "The reality is that if we have lead service lines in the ground, we have a population at risk."

"We agree that the cheating should have been stopped a long time back, but because the proposal doesn’t say, ‘Let’s take the problem out; let’s take the lead out,’ we are left relying on EPA enforcement on the ground, and that is a big question," she said.

Despite that, advocates note that some aspects of the new lead proposal — including the sampling measures — are logistically difficult to enforce. And multiple public health experts said they are still skeptical that the current administration would actually crack down on enforcing lead drinking water violations when it has stalled enforcement in so many other areas of environmental protection (Greenwire, Oct. 3).

EPA won’t release the specifics of how states should enforce the new lead rule until after it is finalized. Until then, health experts say, it’s difficult to know how impactful the positive sampling changes will be.

"The specific problem with this administration is that they have not really shown themselves as stewards of on-the-ground enforcement, to put it politely," Naidenko said.

As Ronnie Levin, a former EPA staffer who now manages the water and health program at Harvard University’s T.H. Chan School of Public Health, said: "This is the Trump EPA, who knows?"