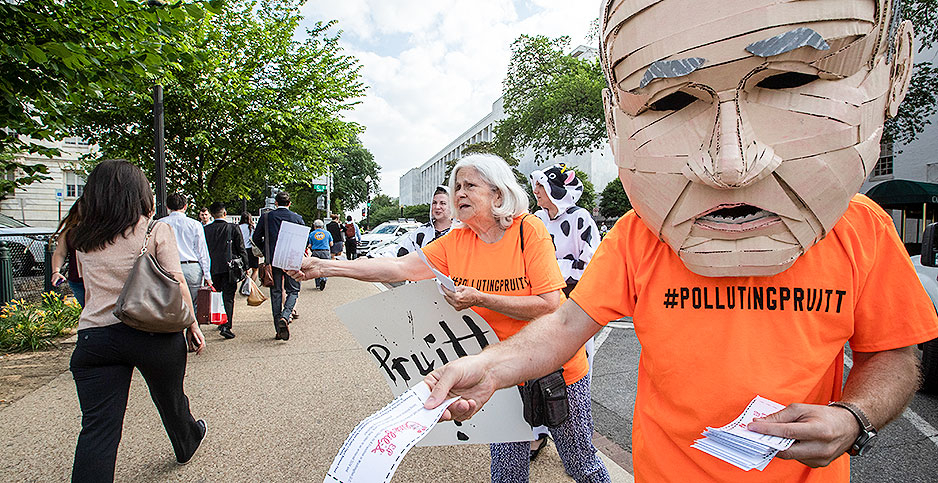 Scott Pruitt’s critics are calling for his ouster, but in the meantime, he’s become a useful punching bag.

Environmental groups and other foes of the Trump administration have piled on criticisms as the embattled EPA boss’s job security has grown increasingly tenuous. Some organizations have even launched a campaign titled "Boot Pruitt," aimed at ejecting the administrator from the agency’s top slot.

Meanwhile, some Pruitt antagonists say he’s a clumsy regulator whose work the courts and even the White House have rejected for being sloppy, incomplete or illegal, which could make his policies easier to overturn later. Some GOP lawmakers are anxious that the attention on Pruitt’s bizarre scandals could sacrifice President Trump’s environmental agenda or cost the Republican Party in tight midterm races — outcomes the left would welcome. And environmentalists acknowledge that whoever replaces Pruitt would push a similar policy agenda that, by and large, has been supported by the broader GOP base.

So the question now facing those organizations is how to avoid a Pyrrhic victory should Pruitt actually resign. Would they be better off just leaving him there?

Hardin said the narrative that Pruitt is a master destroyer of President Obama’s environmental and climate legacy is incorrect, given the various court reversals of EPA moves.

"I would hope he stays on at least through the November elections," John O’Grady, president of the American Federation of Government Employees Council 238, said of Pruitt.

Ire toward Pruitt — and to Trump’s environmental agenda more broadly — has galvanized the green base.

The League of Conservation Voters, perhaps the movement’s heavyweight when it comes to political races, has nearly surpassed the $8.3 million it raised in 2016 for its GiveGreen fund, which supports pro-environment candidates. It’s only June. The group’s annual gala, held this month, attracted record attendance.

The EPA chief also is playing into electoral strategy for the November midterms. LCV and the Sierra Club each is conducting its own polls to see how people respond to Pruitt.

Environmental groups emphasized that they’re worried about the long-term damage Pruitt’s presence brings to the agency. They say no political outcomes can justify the message sent by his persistence amid a bevy of ethical missteps that would sink almost any other political official.

If the EPA boss steps down or gets fired, the person most likely to replace him — at least in the short term — is his deputy administrator, Andrew Wheeler. He’s a former staffer of climate skeptic Sen. Jim Inhofe (R-Okla.) and an ex-lobbyist for coal company Murray Energy Corp.

"Somebody like Andrew Wheeler, if he were to take over, he is very knowledgeable about the EPA and how to get things done, and I think he could do a very good job of ruining the agency himself," O’Grady said.

Pruitt for months was pushing policies that environmental groups opposed. But public attention and GOP reticence began spiking largely when Pruitt’s seemingly bottomless trove of controversies emerged. Little of that had to do with policy.

Still, environmental groups say they’ll be able to keep pressure on the Trump EPA even in a post-Pruitt world. But they’re aware that some people might think the battle is over if Pruitt is out of the picture.

"We’re going to have to keep a really close eye on Wheeler now," Hardin said. "He’s not any different than Pruitt. … Boot Pruitt was a great name for a coalition, but it’s not our sole mission."

Career EPA employees acknowledge that Pruitt’s leaving wouldn’t change the Trump administration’s policy agenda. Those staffers are used to the policy pendulum swinging between GOP and Democratic administrators. Many have implemented policies they might not agree with, but those actions were at least consistent with the agency’s purpose and within the bounds of the law, one longtime agency staffer said.

The sense is, however, that ridding EPA of Pruitt would at least signal a commitment to good governance. EPA staffers noted that the Pruitt scandals have demoralized the agency.

"They make us take ethics training. Everything we’ve seen is exactly what we’ve been told not to do," the career EPA staffer said. "You see that in high places, and it can create rot in an agency in the long run."

Many of those scandals came to light as a result of the Boot Pruitt campaign. It has largely accomplished this by suing for the release of documents requested through the Freedom of Information Act. Environmental groups like the Sierra Club and Natural Resources Defense Council have then shared those communications with reporters who unearthed numerous potential ethical violations by Pruitt and his staff.

Those revelations have made Pruitt’s departure seem almost inevitable. Conservative media figures and GOP lawmakers are now questioning his viability or calling for his resignation. That the environmental movement and personalities like Laura Ingraham or publications like the National Review desire the same goal represents somewhat of a watershed.

But those figures on opposite ends of the ideological spectrum want the same outcome for very different reasons.

For environmental groups, Pruitt has humiliated the agency and its employees by pushing policies in direct contradiction of EPA’s mission while adding embarrassing, petty scandals on top of it all — and still kept his job. For his conservative opponents, he’s a distraction that delegitimizes Trump’s agenda of rolling back onerous environmental regulations, who could jeopardize the GOP’s chances to maintain the House and Senate.

"Clearly, some of the comments coming from folks [last week] is protecting the president and his image," said Jeremy Symons, vice president of political affairs with the Environmental Defense Fund, referring to criticism from conservatives. "And it’s unfortunate that those folks aren’t concerned about the very real health damage from his action."

O’Grady said the force with which the public has pushed back against Pruitt might also compel his eventual successor — Wheeler or someone else — to "walk a little more lightly."

That could translate into somewhat less zealous policy, as well, said John Walke, clean air director with the NRDC. He noted that Pruitt’s outsider status within environmental policy circles has lent itself to ideas that have caused political officials within his own agency, White House aides, and the Office of Information and Regulatory Affairs to bristle. Walke said Pruitt’s exit would leave proposals to nix pollution rules for heavy-duty trucks and restrict the use of science the agency can use to form policy without a champion.

Walke noted that such changes between a Pruitt-led EPA and a Wheeler-led EPA are at "the very small margins." He also said Pruitt could become a "drag on Republicans" this fall. But that doesn’t mean a change at the top should be avoided.

"On balance, yes, we would see the same reckless rollbacks at EPA with or without Scott Pruitt," he said. "But the country would be better served by his absence, whether you are a Republican, Democrat or independent."