Enviros, now on the outs with White House, look to the courts 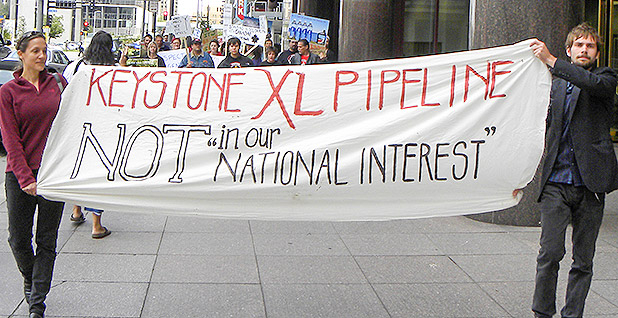 Demonstrators protest the Keystone XL pipeline in Minneapolis in 2011. Protests like these around the country helped convince former President Obama to kill the project. Activists have promised to rise up again, but acknowledge that they aren't likely to have much sway with President Trump. Photo by Fibonacci Blue, courtesy of Flickr.

President Trump yesterday began making good on his promises to boost the oil and gas industry, signing memos reviving two controversial pipelines that have become the face of the climate movement and officially kicking off a war with environmentalists.

Trump directed the State Department to expedite its approval of the Keystone XL oil pipeline that would connect Canadian oil sands with U.S. refineries. He also told federal agencies to quickly approve the Dakota Access pipeline, which last year sparked protests from the Standing Rock Sioux Tribe and activists around the nation.

Environmentalists in response were defiant, promising to use protests and the courts to keep the two pipelines from going forward. Within hours, groups mobilized hundreds of protesters outside the White House.

McKibben said he expressed "a certain amount of hope that we will prevail in the end," citing widespread belief in the President Obama’s first term that the administration would approve Keystone XL.

"President Trump will live to regret his actions this morning," said Michael Brune, the Sierra Club’s executive director. He, too, predicted success.

But where former President Obama eventually bowed to environmental pressure on KXL, denying it a permit in 2015 in the run-up to a landmark U.N. climate summit in Paris, the same protest tactics seem unlikely to work on Trump. He yesterday said that "environmentalism is out of control."

Christopher Guith, a senior vice president for policy for the U.S. Chamber of Commerce’s energy section, said the Obama administration "caved and made a bad policy decision when a thousand people rang the White House."

"I don’t think you’re going to see that happen here," Guith said, adding that the people protesting Trump’s policies over the weekend "weren’t the ones who got him into the White House."

Trump’s moves yesterday are his opening shot against the environmental movement, which for years has had at least a sympathetic ear in the White House.

Climate activists will have a harder time blocking pipelines under Trump, although they say they are ready to take their battles to states and localities, where they might have a strategic advantage. Because the projects have huge symbolic meaning to both environmentalists and conservatives, the fights won’t go down easily.

A small carbon footprint but a big climate symbol

The Keystone XL and Dakota Access pipeline protests have defined much of the modern environmental movement. It’s hard to prove, however, that either project would have a meaningful impact on greenhouse gas emissions or the overall rate of climate change (Climatewire, Dec. 19, 2016).

Paul Bledsoe, a senior fellow on energy at the Progressive Policy Institute and a former Clinton administration climate adviser, said that "by delaying, and then denying, the permit so conspicuously, Obama helped elevate Keystone to iconic status in climate protection, when in fact the pipeline itself won’t have any serious effect on emissions."

Stoody said pipelines have "overwhelming public support." Environmental advocates counter that the tide is rising against a large-scale oil and gas infrastructure build-out. They say they will work with landowners who don’t want companies using their property by claiming eminent domain.

Ben Schreiber, a senior political strategist for Friends of the Earth, pointed to Trump’s low approval ratings and called him "thin-skinned."

"He is now going to have a totally different experience here [compared with on the campaign trail] because we’re going to be out in the street protesting all of his actions," Schreiber said. "He’s not going to be receiving unabashed love and admiration."

Environmental groups contend that the oil and gas industry already has enough pipelines in the United States. They think pipelines are unsafe and that approving more will lock the country into fossil fuel use.

PolitiFact found that the pipeline wouldn’t make much of a difference in how much oil gets extracted in the area.

So far, Trump seems immune to the backlash. Yesterday, he met with auto industry executives to talk about how to grow manufacturing jobs and roll back regulation. There, he boasted that he sees himself as an environmentalist (E&E News PM, Jan. 24).

The president then signed several other actions, including an executive order to the Council on Environmental Quality to identify "high priority" infrastructure projects and find ways to speed them. He also sent memos to the Commerce Department to explore ways to "streamline" manufacturing permits and to require pipelines to be made with American materials to "the maximum extent possible." More details on how those policy changes would work might take months.

In the meantime, opponents to the pipelines are poised to pursue more litigation.

Jane Kleeb, president of the Bold Alliance, said the newly resurrected Keystone XL would face at least a two-year legal process in Nebraska. TransCanada Corp.’s route would depend on the use of eminent domain laws to commandeer a quarter of the land it needs in the state, she said, but that move would trigger litigation by environmental and landowner advocates, who would argue that eminent domain laws cannot be used to benefit private corporations.

"So we will fight in the courts on that level," she said.

Nebraska is also the only state that still has not provided a state permit for the project. It could take TransCanada a year to gain one, providing other opportunities for public input and challenge.

On the federal level, the project would require Clean Water Act permits for places where it crosses streams and other water bodies. Greens are monitoring whether the executive orders will provide more openings for them to challenge the cross-border permit process for the project.

The memo calls for a cross-border permit to be processed within 60 days using an environmental impact statement produced by the Obama State Department, which determined that the project would exacerbate climate change. Anthony Swift of the Natural Resources Defense Council said the project’s National Environmental Protection Act process could also afford opportunities for challenge.

Environmental activists held out some hope that the threat of delays in the states and courts, coupled with changes in the economics of relatively expensive oil sands development, might influence the company to choose not to reapply.

But TransCanada said yesterday that it would prepare and submit an application.

"KXL creates thousands of well-paying construction jobs and would generate tens of millions of dollars in annual property taxes to counties along the route as well as more than $3 billion to the U.S. GDP," TransCanada said in a statement. "With best-in-class technology and construction techniques that protect waterways and other sensitive environmental resources, KXL represents the safest, most environmentally sound way to connect the American economy to an abundant energy resource."

Trump also reiterated that the projects would be required to use U.S. steel, despite the fact that TransCanada has already purchased much of its product, and it was not produced stateside.

Trump wants U.S. to get a cut, but profit margin waning

Trump has long said he views the TransCanada project as an opportunity for dealmaking. In a May statement from the campaign trail, the then-nominee said he might "be asking for a big piece of the profits" from the KXL project.

Later that summer in an Iowa speech, he said the United States should receive "25 percent of the deal."

"They’re going to make a fortune," he predicted.

But profit margins for oil sands product have thinned since TransCanada proposed the project in 2008 as global oil prices have declined.

Alberta Premier Rachel Notley said this loss of revenue is one of the reasons Keystone XL would be so valuable to the northern Alberta oil sands industry, because it would make shipping the product less costly.

"The Alberta economy needs to be enjoying the benefits of a higher return for oil and gas," she said in a press conference in Calgary. "That is definitely something that will happen as a result of" KXL.

But that expectation may not be compatible with protectionist tariffs or border adjustment taxes paid to the United States. And Liberal Party Prime Minister Justin Trudeau might balk if the new U.S. president tries to use the project as leverage in upcoming negotiations over the North American Free Trade Agreement. Trudeau backs the project but has fended off criticism at home in recent weeks for saying Canada needs to shift its economy away from fossil fuel development.

Notley said she has seen an "evolution" in the way Trump has spoken about Canada in the last few days that has led her to believe he understands that the cost to the U.S.-Canadian relationship would be great if Trump tries to "untangle" the two nations’ energy interests.

"Am I completely unconcerned? No," she said.