Enviros on lookout for legal flip-flops from Trump admin 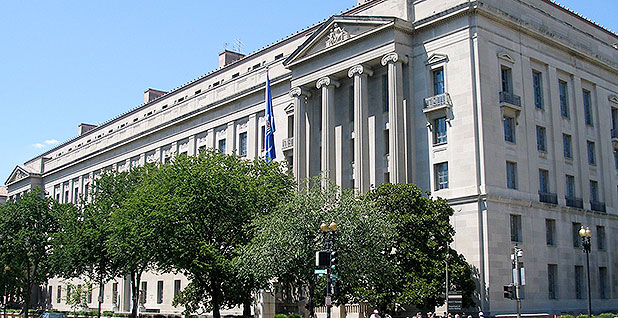 The headquarters of the Department of Justice in Washington, D.C. Photo by Coolcaesar, courtesy of Wikipedia.

Environmental lawyers were on edge this week as they watched the Justice Department abandon a long-held legal position in a battle over a Texas voter ID law.

DOJ lawyers notified a federal court Monday that they would not pursue a key element of their argument against the law: that it was intentionally designed to discriminate against minority voters. The case is the first high-profile instance of DOJ switching positions in active litigation since the Trump administration began.

Though not environmental in nature, the Texas case serves as a warning sign for what could be in store for a number of energy and public lands disputes.

"I would think that fear would be pervasive across all fields by litigants who formerly counted on DOJ to side with them," Dorsey & Whitney attorney James Rubin, who used to work for DOJ, told E&E News.

Environmental groups are aligned with DOJ in several pending lawsuits, and many worry the agency could shift course with Attorney General Jeff Sessions now at the helm.

"I think the combination of the switch on voter ID, the presence of Sessions as AG and the fact that Scott Pruitt has now been confirmed [as U.S. EPA administrator] means we should begin to see switches in positions in environmental cases," UCLA School of Law professor Ann Carlson told E&E News.

While marquee Obama-era regulations like EPA’s Clean Power Plan are obvious targets for the new administration, several oil and gas cases also hang in the balance.

In litigation over the Obama administration’s hydraulic fracturing rule, for example, DOJ lawyers have prepared to argue for reviving the regulation at the 10th U.S. Circuit Court of Appeals. Environmentalists have sided with the government in that case.

Likewise, green groups are angling for a spot alongside DOJ to defend against an industry lawsuit over the frequency of federal oil and gas lease sales. And several groups are awaiting DOJ’s response to a state and industry Supreme Court petition that challenges habitat designations for polar bears in Alaska.

In any of those cases, a change in position from DOJ would put environmental groups in a tricky position in the courtroom — trying to uphold previous government actions that current government lawyers won’t defend.

DOJ won’t walk back its defense of every Obama-era environmental action — courts are skeptical of politically motivated position reversals. In fact, the Trump administration has already built on several legal arguments initiated by the previous administration.

Earlier this month, DOJ appealed a court order that favored Murray Energy Corp. in a battle over EPA air regulations. And at the U.S. Court of Appeals for the District of Columbia Circuit two weeks ago, President Trump’s DOJ mounted a defense for the Obama administration’s crackdown on heat-trapping hydrofluorocarbons (Greenwire, Feb. 17).

Still, environmentalists are monitoring Trump administration lawyers closely, and the watchlist for potential DOJ position shifts is a long one.

"Our expectation is that in many, likely most cases in which DOJ has been defending environmentally protective regulations from industry attack, they will either switch sides or simply capitulate," Center for Biological Diversity Conservation Director Brendan Cummings said.

Cummings is particularly concerned about the polar bear habitat dispute in Alaska. The 9th U.S. Circuit Court of Appeals in 2016 upheld an Obama-era Fish and Wildlife Service decision to protect an 187,000-square-mile swath of the state’s North Slope as critical habitat for the bear.

State officials and oil and gas groups asked the Supreme Court to reverse that decision. Conservation groups have already urged the high court to leave the 9th Circuit’s decision intact, and DOJ’s brief is due next month.

"Given everything else coming out of the Trump administration, we have some concerns about what their position will be," Cummings said.

Over at EPA, ongoing litigation involving the oil and gas industry includes a fight over the agency’s methane restrictions for new oil and gas facilities. Days after Trump was inaugurated, DOJ asked the court to delay litigation to allow the new administration to weigh in. Pruitt, EPA’s new administrator, has vowed to roll back the standards.

"We hope EPA defends the rule it made, but if it goes the other way, I suppose it could opt to agree with industry arguments," Environmental Integrity Project attorney Adam Kron said.

Other lawsuits to watch center on contentious Interior regulations, including several Bureau of Land Management rules for development on public and tribal lands.

The agency’s fracking rule is on a tight timeline, with 10th Circuit oral arguments scheduled for March 22. All briefs already have been filed in the case, making it unlikely that DOJ lawyers would deviate from their established legal positions in court. But if the Interior Department decides to take action to pull its support of the rule before then, DOJ could ask the court to halt proceedings.

Two other BLM regulations — new methane venting and flaring standards and a "Planning 2.0" rule for land-use decisions — are currently in the crosshairs of the Congressional Review Act. If Congress fails to scrap the rules, the administration could move to withdraw them and sideline litigation.

A lawsuit over the Planning 2.0 rule could be particularly well-suited for a DOJ position change because the lawsuit is in its early stages, and DOJ has not yet responded to the December challenge from several Western counties. The agency this month asked a federal court for more time to respond, citing the change in administration.

Environmental groups are also closely watching a lawsuit brought by oil and gas industry groups last year that pushes Interior to commit to having quarterly lease sales whenever eligible land is available. Groups attempting to intervene to fight industry in the lawsuit say they’re concerned DOJ and Interior will not oppose the lawsuit as aggressively as they did during the Obama administration.

A seat in the courtroom

Lawyers’ strongest tool in opposing a legal retreat from DOJ in environmental cases is getting a seat in the courtroom.

Groups frequently intervene in lawsuits to defend environmental protections, and lawyers say that practice will be even more common during the Trump administration. Jeremy Nichols, director of WildEarth Guardians’ Climate and Energy Program, noted that the point of groups like his is "to get in there in the courtroom and keep corrupt administrations like Trump’s from throwing Americans under the bus for the likes of Exxon and BP."

Green groups have moved to intervene on the government’s side in almost all of the cases noted above and are now hoping DOJ lawyers stay on their side. Cummings noted that most career DOJ attorneys handling cases that have been fully briefed will stick with their existing arguments.

"However, if there’s a higher-level directive, we might see some notice filed the morning of the hearing saying the government is asking for a stay of the hearing to consider the possibility of settlement in light of its new position," he said, referring to the fracking rule litigation, which is up for oral arguments in three weeks.

As long as environmental groups secure intervenor status in a case, they can play a role in settlement proceedings, though Kron noted that their influence can depend on the case and who is involved. Intervenors don’t have veto power over a settlement, but they must have an opportunity to air their objections.

Groups can also challenge settlements they see as violations of the Administrative Procedure Act or otherwise unlawful.

"Our primary role in such litigation is to ensure that the rule stays in place and that it can only be changed or eliminated via a lawful new rulemaking or a ruling on the merits by the judge finding that the rule itself was illegal," Cummings said. "A collusive settlement shouldn’t be allowed to shortcut the APA process."

Intervenor status is not guaranteed, however. In the lawsuit over BLM oil and gas lease sales, for example, a federal court in New Mexico blocked environmental groups from joining the case, finding that their position would be adequately represented by government lawyers (Energywire, Jan. 17).

The groups are appealing the decision at the 10th Circuit, eager to prevent potential settlement between industry and government lawyers. Nichols said he’s confident the circuit court will rule in environmentalists’ favor on the intervention request.

Schlenker-Goodrich said he expects similar efforts to intervene in courtroom battles to spread during the Trump administration.

"Moving forward, I’d also expect that a higher frequency of interventions by conservation groups to defend agency decisions, to have a seat at the table in the event of settlement discussions, and to challenge sweetheart settlements between DOJ and industry interests," he said.